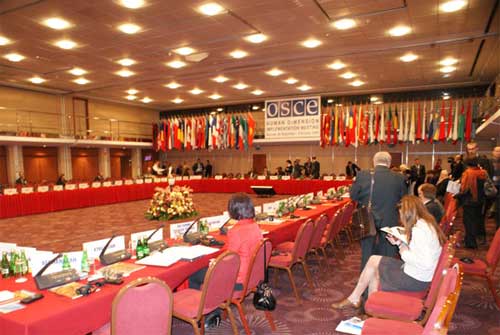 The following is the submission made by David M Petteys of the Act for America 5280 Coalition to the OSCE Human Dimension Meeting in Warsaw on 1 October 2012. Mr Petteys’ submission addresses the three key words that are used increasingly by the Islamic world in order to undermine freedom of expression in the West. He starts by looking at the issue of “Islamophobia” and how it is used as a political tool to stifle dissent and to demonise those who make critical observations. He then goes on to consider the issue of what the word “occupiers” means in Islamic discourse. Finally he considers the differing Shari’a and Western interpretations of the word “slander” and how this can is used to deceive the public in Western countries:

“Islamophobia” sounds like “homophobia”, and is a word conjured by British Muslims in the 1980’s. Designed to cash in on the Post Modern political correctness, it implies that concern for Islam is irrational bigotry. But is this the case?

The Muslims themselves assert no difference between religion and politics, undoing and reversing the separation between church and state so painfully achieved and so cherished in the West. Yet, when Imams preach “Death to America and Death to the Jews” from their Mosque pulpits, they howl “religious persecution” if we object!

Islam, as a political ideology, viciously calls for the death or conversion (or enslavement if you are a “person of the book”) of all mankind! 1 The ideology demeans and brutalizes women2, has killed 270 millions of persons3 in Jihad over the centuries, and kills dozens presently on a daily basis! With this being true, it’s unreasonable to accept the premise that concern about Islam is only “irrational bigotry”.

To pass laws against “Islamophobia” is also unreasonable. It is virtually a criminalization of people’s instinct for self-preservation and renders telling the truth about Islamic Doctrine a crime! This is inappropriate in free societies, even in the face of hostility and pressure from Islamic countries.

Another view of “Islamophobia” is theological. From Q2:217, we find a definition of” fitna”: “..but a greater (transgression) with Allah is to prevent mankind from following the way of Allah, ..”4 In essence, “fitna” is the tumult and disturbance caused by unbelievers in resisting the Islamization process. Muslims see this as “Islamophobia”. This is a far cry from our perception of Islamophobia as irrational bigotry.

If it becomes illegal to discuss or criticize Islamic Doctrine in the West, our societies become defenseless in the market place of free ideas.

One always hears outrage at “Israeli occupation of Arab lands”. In the West we interpret the conflict, therefore, as geographical. Thus, the path to peace is to twist Israeli arms until they give up a little land, (termed a ‘risk for peace”) which would then pave the way to Middle East peace! Unfortunately, the premise is wrong: the conflict is theological, NOT geographical!

The Israeli pullback from Gaza in August 2005 is the most recent case in point. Rather than responding in kind as promised by the apologists, and ushering in peace, Hamas moved in their rocket teams and made public pronouncements of “Arab arms driving out the Jews with their tails between their legs”! Before long, rockets began to fall on Sderot and other southern Israeli cities.

Theologically, Islam divides the world in two, the Dar al-Islam, and the Dar al-Harb, the world of peace and the world of war. To say Islam is the “religion of peace” has an important qualifier: this only takes place once the entire world has submitted to Islam. Until then, Muslims are mandated to make war on Dar al-Harb.

Another aspect is the Muslim conviction that the world and everything in it belongs to Allah. Thus, conquest of non-Islamic lands is a “restoration” to Allah. Not only are the Israelis “occupiers”, but we in Europe and North America are as well! People in the West need to bare this in mind. “Throwing the Israelis (the only sane Democracy in the Middle East) under the bus” will not achieve peace with Islam: it will only means we are next. This is what is meant by the Muslim saying “First comes Saturday then comes Sunday”.

In the West, we think that “slandering Islam” means saying something unkind about Islam. But this is a tragic misunderstanding. To sort this out, we must look at the definitions of slander under from the Western perspective and from the Shari’a definition.

Slander usually means saying something about someone that damages their reputation but is not true. Thus, if I say “William Clinton is a liar”, there are documents filed with the New York State Bar stating Mr. Clinton was disbarred for committing perjury. I am not subject to a liable lawsuit. But if I were to say that Mr Clinton prefers intimacy with farm animals, in the absence of affidavits and eye witnesses to prove my allegation, I would be a subject to such a lawsuit.

For instance, If I say Q9:5, Q9:29 or 8:60 or many others tie violence and Islamic Doctrine together, Muslims accuse me of slandering Islam! And under the Shari’a definition, it’s true! But it is not so under the Western definition.

This puts a better perspective on Muslim accusations, and there is no reason for the West to continually tip toe around trying to keep from “offending” Muslims. The value of the truth is a Western concept for which we need not be ashamed or to apologize. But we should be ashamed if we make the truth illegal to accommodate Islam.

6 “Insult”, “denigration” “demeaning”, all these terms fall under the rubric of the Shari’a definition of “slander”

Act for America 5280 Coalition Submissions on the OSCE site.