Support this effort: The Campaign to Defeat Barack Obama 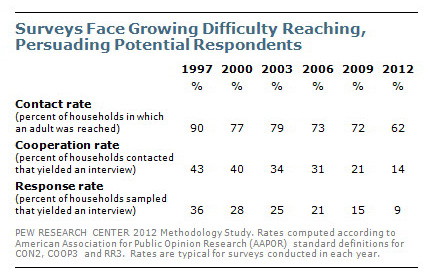 Remember how I told you to ignore the polls? That they were a fabrication? Propaganda from the American Pravda? Well, here’s your proof. Zombie has written a post showing just how irrelevant polling now is.

The response rate on polls is now just 9% as opposed to 36% in 1997. No one is home anymore or answering. They are either working or they do what I do, they screen their calls. So, the ones answering are a coordinated effort from the Progressives to massively skew the polls in favor of Obama. Do not listen to the major news outlets – even Fox News. They have all been compromised long ago.

Polls can no longer be trusted. All of it is biased now in favor of the left and their evil agenda. We are the 91% and we surround these asshats. Read Zombie’s piece – all of it and share it.

Mr. Petteys’ submission addresses the three key words that are used increasingly by the Islamic world in order to undermine freedom of expression in the West. He starts by looking at the issue of “Islamophobia” and how it is used as a political tool to stifle dissent and to demonise those who make critical observations. He then goes on to consider the issue of what the word “occupiers” means in Islamic discourse. Finally he considers the differing Shari’a and Western interpretations of the word “slander” and how this can is used to deceive the public in Western countries.

The text for the submission can be found HERE.

Note the involvement of Americans. This is something we all need to get involved in. 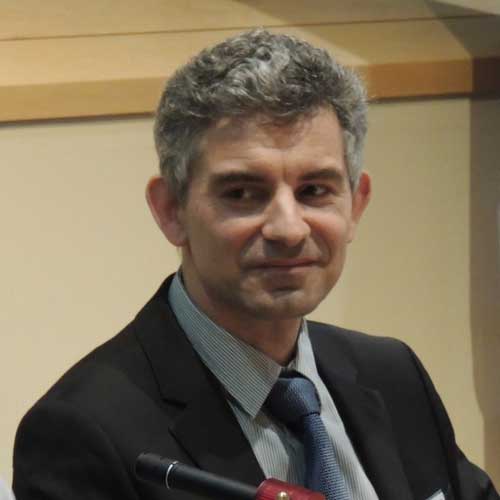 Chairman of ICLA addresses the OSCE Human Dimension Implementation meeting in Warsaw. To see the text of this presentation please click HERE. 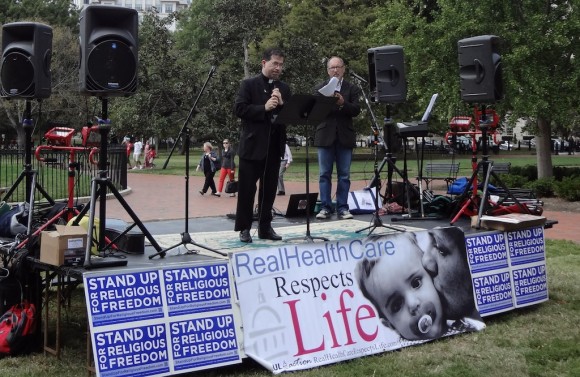 Just before the first presidential debate, pro-lifers are speaking out on the critical issue of religious liberty and getting arrested as part of a new strategy of active “resistance” to the Obama Administration’s pro-abortion and pro-homosexual policies.

Speaking at a “Stand Up for Religious Freedom” rally in Washington, D.C., Catholic Priest Marcel Guarnizo urged the Catholic hierarchy to take the fight to the Obama Administration and publicly denounce Catholic politicians who promote abortion and homosexual marriage. He singled out Obama’s Department of Health and Human Services HHS Secretary Kathleen Sebelius and Maryland Governor Martin O’Malley for criticism.

He spoke in front of a “Real health care protects life” banner.

The rally is part of a national series of events being held in over 105 cities across the nation to speak out against the Obama Administration’s order or “mandate” from the Department of Health and Human Services (HHS) that all employers, including religious institutions, provide birth control and abortion-related services.

The mandate’s narrow “religious exemption” would not apply to religious schools, hospitals and charities.

In an attempt to attract major media attention, some speakers and demonstrators were arrested in front of the White House in symbolic defiance of the HHS Mandate. It is legal to demonstrate as long as one continues to move but it is illegal to stop, kneel, and pray. “Dozens of people have already been arrested over the weekend for kneeling and praying in front of the White House,” noted WorldNetDaily.

Lila Rose, who has become famous for sponsoring undercover investigative journalism videos exposing the illegal practices of the abortion industry, was a featured speaker at the Sunday event, held in Lafayette Park across the street from the White House.

Rose, president and founder of the pro-life group Live Action, said that the HHS mandate is ultimately designed to provide more taxpayer dollars for the abortion industry.

Her latest “Gendercide” videos at the www.LiveAction.org site expose sex-selection abortions in America, in violation of the law. “We use new media to educate the public about the humanity of the unborn and investigative journalism to expose threats against the vulnerable and defenseless,” her site says.

Kristina Garza, campus outreach director of Survivors of the Abortion Holocaust, also spoke, saying that America has traditionally been a place where people go to escape religious persecution but that the persecution has now come to America itself. “We cannot let this country get to the point that we have to hide the fact that we are Christians,” she said.

She added, “If we are the country where people historically run to for freedom, and our freedom is being revoked, where is our hope?”

Fr. Marcel Guarnizo told the rally that the HHS mandate is really about abortion. “They want to make abortion the national way of the United States and make you pay for it,” he said.

“There’s way too much silence even in the Catholic Church,” he said, adding that “We need a strategy for resistance.” He said he has urged Catholic leaders to consider new ways to counter what the Obama Administration is doing.

He also apologized for what some self-proclaimed Catholics have done, such as Obama’s HHS secretary Kathleen Sebelius and Maryland Governor Martin O’Malley, who legalized homosexual marriage. “I would like to say as a Catholic that I am ashamed and sorry that we put society through this grief, that we did not teach them and have not corrected them. But these people use the Catholic name for political reasons. And we have to start making distinctions as shepherds.”

He added, “Our issue is not that people sin. Our issue is with people who are sinning willfully, knowingly, and making it public policy. Those people need to be castigated publicly by the shepherds of the church.”