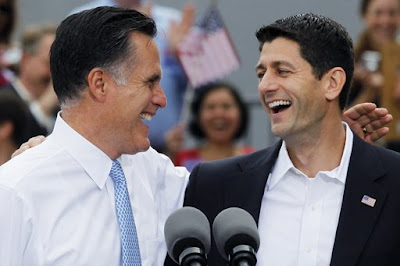 This Thursday, we’re going to see a perfect example of the choice at hand when Republican VP nominee Paul Ryan steps into the arena against incumbent VP Joe Biden.

On the one hand, a young heir to Reagan’s Revolution, on the other, a symbol of everything wrong with Washington and our politics – a lifelong politician, an entrenched wart on the body politic who’s been wrong on almost every major public question, a fixer and an enabler of the worst sort of crony politics.

The pressure on Ryan will be intense. It’s his first time debating on the national stage and after last week’s debacle by the president against Mitt Romney, the compliant Obama Media will be looking for any excuse, even a single slip to zero in on and declare Biden the winner.

On the other hand, Joe Biden can mouth the most ridiculous and ignorant statements and wallow in gaffes and if they’re even mentioned by most of the media, it will be with an indulgent chuckle and an ‘oh, that’s just Joe.’

The moderator, ABC’s Martha Raddatz, is a left leaning Democrat who will be under intense pressure from her peers to assist Biden and ‘fact check and challenge Ryan’ in order to avoid the beat down Jim Lehrer received after the first presidential debate for behaving like a moderator instead of an ally to the president.

Yet with all that, my money’s on the rookie. Because not only does he have the smarts and the talent, he has facts and the tide of history on his side, as he shows here:

Fewer people will likely watch this debate than the one last week in Denver between Barack Obama and Mitt Romney, but this one is worth paying attention to because of what it symbolizes for America’s future… a choice between a chance at redemption and a move towards our Founder’s principles versus a further wallowing along a corrupt and discredited path.

We’ll know in about a month which future we’ve chosen.

This week’s contest is dedicated to Paul Ryan… and to America’s future.

This week, The Pirate’s Cove and Against All Enemies took advantage of my generous offer of link whorage and earned honorable mention status with some excellent pieces they submitted.

Simply head over to Joshuapundit and post the title and a link to the piece you want considered along with an e-mail address (which won’t be published) in the comments section no later than Monday 6 PM PST in order to be considered for our honorable mention category. Then just return the favor by creating a post on your site linking to the Watcher’s Council contest for the week when it comes out Wednesday morning.