Obama charts flow of money and power out of productive businesses.

Barack Obama is desperate to make people believe that he really cares about “the middle class.” After four years, his actions speak louder than words. Some 85% of the middle class say they are worse off today than they were ten years ago. According to the Wall Street Journal, from the time Obama took office in 2009, “The Obama years have been brutal on middle-class incomes” wiping out “$4019 in real income” for families. The report goes on to say, “The last time incomes fell this fast was during the late 1970s under Jimmy Carter, and it’s no coincidence that economic policies then and now are so similar. If Mr. Obama succeeds in convincing voters that he really is the tribune of the middle class, it will be the political conjurer’s trick of the century.”

The financial loss and burden imposed by Obama will be greater on all workers, including Black, Hispanic, Asian and White, when looming tax hikes go into effect January 2013 along with Obamacare’s vast array of hidden taxes set to further rip family budgets apart. The question is — why has the middle class been hit so hard by Obama? Is it an ideological grudge?

Obama had two doggedly radical mentors that shaped both his ideology and his current policies. One was a committed hardcore Communist and the other was renowned as a hardcore Socialist. Neither man stressed American values, but taught the opposite — that America with its free enterprise, republic based, God-worshipping system is the enemy of the people. Frank Marshall Davis, a reported pedophile, race mongerer and strident Communist, was Obama’s family friend and was recruited by Obama’s grandfather to educate young Barry in the ways of the world. It was, however, Obama’s educational mentor, that stressed that if “real power” is to be gained, it must be done at the expense of the American people and the economy.

The late Harvard Professor Saul Alinsky wrote that the key to weaken — then take over America, its economy and its people — is to “destroy the middle class.” Alinsky advocated use of class and race warfare. He believed that “wealth redistribution,” taking from those who work and giving it to those who don’t, is the catalyst to bring down the U.S. economy and free-market capitalism. After four years in office, Obama is well on his way to doing just that. Alinsky’s socialist guidebook is embedded in Obama’s record of economic policies that he has visited upon all Americans and their families — specifically the “middle class.”

It should be noted that Alinsky began his book, Rules for Radicals, with a tribute to: “…the first radical known to man who rebelled against the establishment and did it so effectively that he at least won his own kingdom – Lucifer.” Alinsky championed and sought to emulate Lucifer, otherwise known as Satan. Alinsky’s game plan was to lie, cheat and steal elections in order to control the American people and bring American commerce to its knees. Excerpt from my April 2010 article: Power At Any Cost: The Training of Barack Obama:

It is true that Saul Alinsky preferred the teachings of Lenin, who murdered millions, to the teachings of Mao, who also murdered millions. Mao advocated obtaining power by the barrel of the gun. Lenin was more subtle by first advocating working the system and obtaining power by the vote, then using the barrel of the gun to keep it. Alinsky had no qualms about stealing the vote as a means to reach his end result – power. For Saul Alinsky, deception is the key to everything. Say one thing, do another, even change the meanings of words. Pretend to be bi-partisan in order to get the upper hand. For Alinsky, the means don’t matter – destroy whomever or whatever gets in your way. Alinsky made it clear that what his followers want “is power.”

Though Alinsky died before Obama could make it into his classroom, an Investor Business Daily editorial traces Obama’s affair with Alinsky’s radical ideology: “Obama first learned Alinsky’s rules in the 1980s, when Alinskyite radicals with the Chicago-based Alinsky group Gamaliel Foundation recruited, hired, trained and paid [Obama] as a community organizer in South Side Chicago …In 1988, Obama even wrote a chapter for the book “After Alinsky: Community Organizing in Illinois,” …he traveled to Los Angeles for eight days of intense training at Alinsky’s Industrial Areas Foundation. In turn, he trained other community organizers in Alinsky agitation tactics. Obama also taught Alinsky’s “Power Analysis” methods at the University of Chicago.

Ed Blumenfeld wrote in The New American: “One of Obama’s advisors during his 2008 election campaign was Peter Dreier. …Stanley Kurtz, in Radical-in-Chief, credits Dreier with formulating the stealth plan to destroy capitalism. His plan is to gradually expand government spending until the country nears fiscal collapse. At that point, a public accustomed to entitlements will presumably turn on its capitalist masters when they propose cutbacks to restore fiscal balance.”

The one Alinsky constant learned by the Obama administration is deception. Now, as the election is at hand, it attempts a full-blown cover-up from Benghazi-gate to fake unemployment stats to deflecting its own deceit by accusing its opponent of lying – a trait that the radical Democrats and their leader have mastered exceedingly well. While professing to “care for the middle class,” Obama’s answer to lift the middle class out of its current slide into poverty is to deluge Americans with hidden taxes attached to Obamacare, send gasoline and fuel costs soaring by denying drilling permits and clean coal and printing a flood of devalued dollars that create inflated costs on food, clothing and American households. VP Joe Biden is right that the last four years of Obama have “buried” the middle class along with women heads-of-households as concurrent casualties. Obama has left 5.5 million women unemployed putting the poverty rate among women at 16.3% — the highest in 17 years. In the Socialist power-play, Black-Americans are collateral damage. According to the Chicago Tribune, failed economic policies have led to the “Wiping out of gains made in the last 30 years [by Blacks], with plummets in wealth and high rates of foreclosures.” Socialism spares no race, no one is exempt from its hardships.

Foretelling Obama’s agenda for the middle class, Tony Adkins of Conservative-Daily reports: “The WARN Act is a federal law requiring that most employers give 60 calendar days’ notice before they institute plant closings and mass layoffs. The point is to give workers some time to adapt to their upcoming unemployment by looking for another job, adjusting finances, or entering training for new skills. It’s the right thing to do…and, it’s the law. But, that pesky law has a bad timing consequence for our sitting President. …funding cuts signed by President Obama are about to result in an estimated two million jobs being lost; but, layoffs right before an election would be politically toxic, and Obama wants to avoid angry, laid off workers who might tend to vote for Romney. So, he has therefore instructed his Office of Management and Budget to ignore the law and WAIT to send out notices [until after the election].” Again, no race, no one, is spared from this hardship.

“Obama learned his lesson well,” David Alinsky [Saul Alinsky’s son] reportedly stated, “I am proud to see that my father’s model for organizing is being applied successfully beyond local community organizing.” Alinsky taught that the key to destroying the middle class is to create a failed economy that destroys private sector jobs which leads to a powerless, but growing subset of laid-off workers who become reliant on and controlled by the government. It is Alinsky’s dream come to life at the destructive hands of Barack Obama, President of the United States.

POWER AT ANY COST: THE TRAINING OF BARACK OBAMA
http://darwinsracists.com/book/?p=68

Sharon Sebastian (www.DarwinsRacists.com) is an author, writer, and contributor to various forms of media including cultural and political broadcasts, print, and online websites. In addition to the heated global debate on creation vs. evolution, her second book, Darwin’s Racists – Yesterday, Today and Tomorrow, highlights the impact of Social Darwinism’s Marxist/Socialist underpinnings on the culture, the faith and current policy out of Washington. Critics are calling Darwin’s Racists – “Incredibly Timely” and “A Book for our Times.” Sebastian’s political and cultural analyses are published nationally and internationally. Website: www.DarwinsRacists.com. “Darwin’s Racists – Yesterday, Today and Tomorrow” may be ordered at: www.DarwinsRacists.com, www.Amazon.com, www.BarnesandNoble.com and at bookstores online and worldwide. Sharon Sebastian’s insights on YouTube: http://www.youtube.com/watch?v=IdZHzMG66Kg 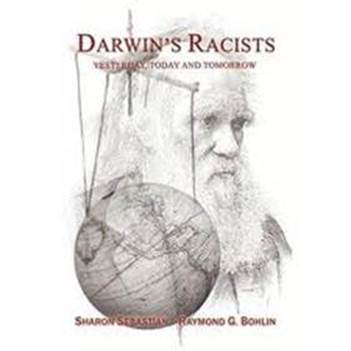