It’s “High Noon” for the Obama reelection campaign, according to Chuck Todd of NBC News, according to his analysis of a [startling] new NBC/Wall Street Journal poll on NBC’s Meet the Press, Sunday morning, October 21st, as captured on an the audio sound bite aired on the Rush Limbaugh Show, one week ago.

You got the numbers … this is significant.

Let’s go inside the numbers a little bit.

The gender gap among men: Romney a ten-point lead.

Let’s go to women. This is interesting! President, an eight-point lead here. This is actually his smallest lead among women that we’ve had all year long.

A few other things inside the numbers here, David.

In the Midwest: Romney a narrow lead but way inside the margin of error.

And among all the collective battleground states, a little bit of a lead for Mitt Romney.

This sudden change was not much of a surprise, as these pollsters had for months been over sampling Democrats over Republicans by 9 to 11 points–using the same turnout rate as in 2008–and in prior months had been using “Registered Voters,” to ‘assist’ Barack Obama in maintaining a consistent 5 point lead.

Now, using only “Likely Voters,” self-identified as being 36.8 percent Republican to 34.2 percent Democrat, would give Republicans a +2.6 point edge–producing a net ‘swing’ in turnout of nearly 13 points, according to Rasmussen’s September 2012 polling.

However, one week later, things have tumbled even further for President Obama.

Gallup’s weekly presidential tracking poll results, from last week, show Romney expanding to a five point lead over Obama among “Likely Voters,” up to 51-46 from 50-46 the week prior, as reported in Brett LoGuirato’s Business Insider article today.

Rasmussen’s weekly presidential tracking poll has Mitt Romney ahead of Barack Obama by 49-47; but, as Romney is historically likely to win the 2 percent undecided vote as well, that would bring both polls into alignment. See daily tracking history.

The poll gives Romney a 50-46 edge over the president, after having held the lead for the past 12 days in a row–and, after likely picking up the 2 percent undecideds, raising the tally to 52-46, it will nicely reconcile the [national] Gallup poll (above), which is exactly what happened with Obama at this point in 2008, where both polls had him at 53-46 over McCain.

Then, there is nothing that will cut a Liberal to the quick like being ‘abandoned’ by the media, which is exactly what happened when The Detroit News, one of Michigan’s two largest news outlets, endorsed Mitt Romney for president last Thursday, according to Andrea Billups’ October 25th Washington Times article.

The newspaper cited Romney’s economic success, as well as being a Michigan native son whose father was governor. They further stated that he offered “the best hope of changing the nation’s fate.”

Had Obama done as well with the rest of the economy, it would be hard to deny him a second term. But Obama said himself in a midterm television interview that if by the end of his first term the economy was still broken, he should not be re-elected. Well, the economy is still broken, and we have lost confidence in the president’s ability to make the necessary repairs.

In noting that ‘the nation is struggling to determine its future course, and how it defines itself in the world,’ the editors added:

A country built on rugged individualism finds itself increasingly under the thumb of a federal government that is ever expanding its reach into the lives of its citizens. Obama has proved himself a disciple of the doctrine that for every problem there’s a government solution.

Romney, by contrast, embraces individual initiative and entrepreneurship. He would turn back the encroachment of the bureaucracy into the private sector. Romney would replace the heavy hand of government with the invisible hand of a rational marketplace working to produce broad prosperity.

As if that truth wasn’t painful enough, Barack Obama also lost out to Mitt Romney on a few other important swing state press endorsements, including the Detroit Free Press, Grand Rapids Press…and, the Chicago Tribune.

Finally, Mitt Romney also walked away with the prize in Iowa Saturday night, where for the first time in 40 years the editorial board of The Des Moines Register, Iowa’s largest and most influential newspaper, chose to endorse a Republican for president, as reported in Chris Laible’s October 27th FOXNews article.

Generally, they praised Romney’s private sector experience and his ability to work across the aisle as governor–deciding that he was the best choice to fix the nation’s problems, writing:

Voters should give Mitt Romney a chance to correct the nation’s fiscal course and to implode the partisan gridlock that has shackled Washington and the rest of America–with the understanding that he would face the same assessment in four years if he does not succeed.

They concluded by writing:

The president’s best efforts to resuscitate the stumbling economy have fallen short. Nothing indicates it would change with a second term in the White House.

It is quite apparent that America believes that Barack Obama’s now famous ‘last resort’ of publicly calling Gov. Romney a “liar, felon, and bull sh-tter, who suffers from Romnesia,” is nothing more than the “Obamaloney,” of a soon to be former–and the worst ever–president, in our nations long history.

The October 29, 2012 letter from True the Vote’s attorney, Brock Akers stated, “We are shocked at your comments on ‘The Ed Show’ of MSNBC, which you either know not to be true or have done nothing to assure their accuracy. We had higher hopes for you as an otherwise respected Member of Congress.”

Akers continued, “Each and every one of these allegations is categorically false, has no basis in truth, and is not anything…other than a conjured allegation of some individual seeking to distort reality. This defamation per se is shameful. Without so much as the common courtesy to meet with Ms. Engelbrecht, where you could have quickly learned how off track your allegations are and have been, you instead go on national television and call this group names and cast them in the most unflattering light possible.”

True the Vote continues to offer to meet in order to brief Rep. Cummings and his staff, yet demands a full and public retraction of recent false statements on MSNBC.

The letter has been made available for viewing here. 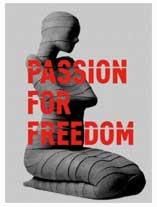 Censored works shown for the first time in the City of Freedom – London.

For the fourth time the annual festival will take place at the Unit24 Gallery on London’s South Bank. Artists from 30 countries around the world have entered their work into the competition this year. During the festival the works of 36 artists will be shown from countries spanning the globe including Cuba, Pakistan, China, Poland, Afghanistan, UK, Italy and USA.

“Artists using mediums such as video, installation, painting and sculpture openly debate issues that are usually swept under the carpet.’ It is important to remember that our society takes freedom for granted. Being interested in ‘the next big thing’ we forget that what we have was fought for and has to be protected.” – says Agnieszka Kolek, KM Curator.

The exhibition’s message comes across strongly with Sarah Maple’s work “Inaction is a weapon of mass destruction.” Invited to be a Special Guest Artist, Sarah decided to confront the viewer with their own reflection. ‘It is like everyone can be an activist in their everyday lives through small acts.’ – says Sarah.

“Real change comes about by challenging and dissenting not by appeasement and silence. It comes about by breaking taboos and pushing aside that which is deemed sacred and art is such an important way of doing this. As Ai Wei Wei says, “if we don’t push, nothing changes.” says Maryam Namazie, One Law for All’s Spokesperson.

‘We should have no illusion that Twitter or Facebook will free us.’ –says Marianna Fox, Assistant Curator. ‘On Friday, 9 November there is a special screening of “Ai Weiwei Never Sorry” documentary by Alison Klayman. It shows how even in a global village connected through social media Chinese authorities could persecute the artist by beating him up in secret detention, bulldozing his newly built studio and limiting his access to the outside world. Artists, such as Ai Weiwei pay the highest price for making meaningful art. ’ – comments Marianna.

The Festival does not only promote art dissidents from aboard. ‘There is an eminent danger that our society is censoring itself without obvious totalitarian states imposing laws upon us.’ – says Agnieszka.

‘Many galleries were afraid to exhibit my installation “PO. Box to Allah” in their spaces. I have never given up hope to make a statement on freedom of religion and freedom of speech wherever on earth people will be.’ – says Johan van der Dong, artist from Holland.

This year’s festival has got a strong video presence. To highlight a few Liz Gascoigne’s ‘No Spring without Women’ is hypnotic while Paul Harrison’s work “The Sea of Parity”, who graduated only in 2011, leaves the viewer with the strongest image possible.

One Law for All’s Passion for Freedom is non partisan and voluntary organization gathering professionals working in arts and media. The first edition of non-profit London Festival took place in 2009. The annual celebration of Freedom takes place in a spacious, contemporary gallery next to Tate Modern.

One Law for All – http://www.onelawforall.org.uk/

From The Center for Western Journalism…