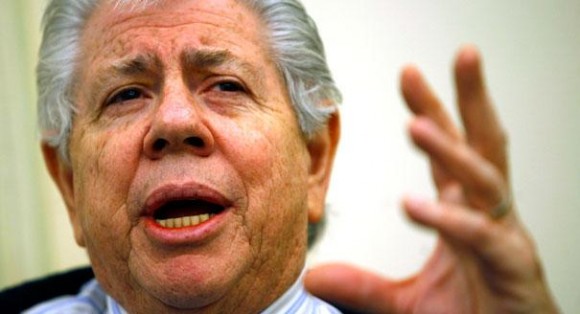 Carl Bernstein was one of The Washington Post’s Watergate reporters who brought down Republican President Richard Nixon through the acquisition of inside information from the notorious source called “Deep Throat.” Still trying to make himself relevant decades later, Bernstein is now warning that Mitt Romney, one of the most moderate candidates to run for the Republican presidential nomination this year, is actually a dangerous radical who caters to the far-right.

“Carl Bernstein on Mitt Romney’s Radicalism” is the headline over his Daily Beast article, as if Bernstein has performed a great public service by telling us that he has published the definitive exposé of Romney just days before the election. The piece is full of innuendo and distortions and even qualifies as laughable. Bernstein has lost his magic and has become a journalistic joke.

The article is based on anonymous sources who claim to be associated with the “moderate” wing of the GOP and are warning about the “crazy right” that might entice Mitt Romney to govern as an extremist as president. “Plainly put,” Bernstein says, “today’s Republican Party (and its Tea Party wing) represent the first bona fide radical political party to rise to dominance in Washington in nearly 100 years.”

At a time when we have a Democratic Party in power in the White House, led by a politician with links to communists and terrorists in Hawaii and Chicago, the Bernstein article has to be seen as ridiculous on its face. But Bernstein represents the mentality of much of the media who see the far-left orientation of the national Democratic Party as nothing unusual or worth commenting on.

Bernstein’s 2,100-word article is full of bizarre statements about Romney and the GOP.

Alluding to the Republican Party and the Tea Party movement, Bernstein writes, “It represents as extreme a shift in political philosophy as any of the radical ideologies that have prevailed in our history.”

Tea Party members oppose Big Government, excessive federal spending and debt. Bernstein is claiming that it is somehow “radical” to want to return to the founding principles of the United States and save America from financial bankruptcy and economic ruin. Who is the real radical?

Some of Bernstein’s other absurd statements include that the Republican Party is engaged in the “promotion of religious ideas as government policy.” He does not explain what he means, but if he is alluding to protecting religious liberty from government orders and mandates, Bernstein has it completely backward. It is the Obama Administration that is threatening religious organizations if they promote and enforce their own views on moral and social matters. “Life and liberty” has become the rallying cry of many churches as election-day approaches, in response to government intrusion into their internal affairs.

If Bernstein is referring to protecting human life from abortion, he has exposed himself as a religious bigot who objects to religious people having a political voice in our democratic process by working to extend human rights protections to the most innocent and vulnerable among us.

Indeed, Bernstein complains that Romney wants to overturn Roe v. Wade, as if this is somehow a truly radical approach and evidence that the Republican Party has moved dangerously to the right. Overturning Roe v. Wade would only return the issue of abortion to the people of the various states, where it had been previously. Roe v. Wade legalized abortion on a national basis and undermined the right of the people to decide these matters.

Bernstein also faults the “unrelenting anti-immigration stance” of Romney and the Republicans, when the GOP position has been against illegal immigration and in favor of secure borders.

It is troubling that a figure like Bernstein, considered a journalistic icon, would resort to such gross distortions of the record. Does he expect readers of The Daily Beast to take him seriously?

Going further, Bernstein argues that Romney wants to “eliminate environmental protection programs.” He does not explain what he means by this, either. He seems to think that he can throw around these charges, without evidence, and that people will accept his claims simply because he was the famous Post reporter who helped write the Watergate stories.

Needless to say, Romney does not want to “eliminate environmental protection programs.” What he has said is that he opposes excessive regulations that prevent development of America’s natural resources.

It is sad and troubling to see Carl Bernstein write such a buffoonish commentary. It demonstrates that he has a bias against the Republican Party and fact-filled journalism.

What many people may not realize is that Bernstein, who did indeed help bring down Richard Nixon, is a “red diaper baby,” the child of Communist Party parents. Professor Paul Kengor examines this fact about Bernstein in a fascinating American Spectator article noting that some of the red diaper babies became communists, like their parents, but others did not. The purpose of the article is to explore whether President Obama is also a red diaper baby and whether he ever gave up on the Marxist ideology that was drilled into him by communist Frank Marshall Davis and others as he was growing up in Hawaii.

Kengor writes, “If Barack Obama is a Red Diaper Baby, it doesn’t mean he’s a communist. I’ve met many conservative anti-communists who were born and raised Red Diaper Babies, only to flee their parents’ politics like the plague.”

Of course, there is no evidence of Obama ever renouncing his communist upbringing. He is certainly not a conservative.

“Bernstein is not a communist,” Kengor also declares, during the course of exploring this interesting topic. This fact is certainly worth noting. But Bernstein’s treatment of Romney in The Daily Beast does suggest that the famous Watergate reporter is a man of the far-left, and that he sees right-wing conspiracies where none exists. His Daily Beast article is worth reading, if only to gain an understanding of the mentality of much of the press today. They see Romney, not Obama, as the real Manchurian candidate.

Kengor has been pleading with the media to examine Obama’s Marxist upbringing, but they have chosen instead to deliberately cover it up. It is one of the worst examples of journalistic corruption in history.

Carl Bernstein, being a red diaper baby, is in the perfect position to investigate Obama’s background.

As a red diaper baby, Bernstein is usually identified as the author of Loyalties, described as “a memoir about his parents during McCarthy-era Washington.” His parents, Al and Sylvia Bernstein, were members of the Communist Party USA. He reveals in his book that liberal Democratic Senator Edward Kennedy helped him obtain government documents about his father’s case in particular. His father had been questioned about a possible relationship with Louise Bransten, a member of a Soviet espionage network.

This milieu would have been a good place to start with Obama. Bernstein could have requested an interview with the President to ask about Frank Marshall Davis’s impact on him. Davis was called before Congress to answer charges that he was a communist and refused to answer them. But his 600-page FBI file proves Davis was a member of the party, possibly engaged in espionage on behalf of the Soviet Union.

This kind of story, if it broke new ground, could have earned Bernstein a journalism award that could have rivaled his work on Watergate. Instead, it seems that he has spent his time talking to liberal Republicans and making up things about Romney and the Tea Party.

Regarding Watergate, it is worth noting, as journalist Victor Lasky pointed out in his book, It Didn’t Start With Watergate, that it was a scandal in which Nixon and his staff stood accused of using tactics employed by previous Democratic administrations. What’s more, Bernstein’s “Deep Throat” source turned out to be a former official of the FBI by the name of Mark Felt who had a grudge against the FBI and Nixon.

Paul Kengor points out in a new article on the liberal media’s treatment of various scandals, “The press detested Richard Nixon unlike any modern president. Sure, the liberal media went after George W. Bush, but nothing like the way it attacked Richard Nixon. Liberals’ hatred of Nixon was pathological. It dated to Nixon’s work in exposing [Soviet spy] Alger Hiss. As Nixon would say at the end of his life, the Hiss-Chambers trial forever forged a legion of unwavering Nixon enemies on the left. I’m not saying that Richard Nixon was an angel, but if you want to understand Watergate, you need to understand the hatred of Nixon by the liberal media.”

Now we see that hatred, directed against the Tea Party and the Republican Party, being expressed in print by a media figure still considered prominent in the field. Whether Romney wins or loses on Tuesday, the Bernstein article will remain as a case study of the anti-Republican and anti-Romney media frenzy.

One thought on “Romney Falsely Labeled a Radical by Watergate Reporter”