Truly, I didn’t expect this to happen. There was a lot of talk from Israeli leadership about taking action against Hamas because of some 150 rockets launched into southern Israel. Talk. And then news broke about a cease fire being brokered by Egypt. And Defense Minister Barak made a statement about the “resilience” of the residents in Israel’s south.

And I thought, oh no. Agreeing to temporary quiet yet again, waiting for the terrorists in Gaza to decide when to launch the next attack against those “resilient” residents?

But the military surprised me, and all of us, and acted.

A series of airstrikes was launched by the Air Force inside of Gaza late this afternoon. The key strike was the bombing of a car in Gaza City, which instantly killed Ahmed al-Jaabari, the head of the military wing of Hamas (Izz ad-Din al-Qassam Brigades). 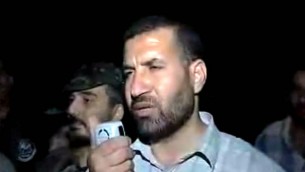 Reportedly, his son was killed as well, and two others wounded.

The IDF has now announced that it has launched a “widespread campaign on terror sites and operatives in the Gaza Strip, chief among them Hamas and Islamic Jihad targets.”

This campaign has been dubbed “Operation Pillar of Defense.” In Hebrew it’s “Amud Anan,” which alludes to the pillar of cloud that led that the Hebrews in the Sinai after the Exodus from Egypt. I like that. And once there’s a name applied, we know it’s serious and not just a one time event we’re looking at.

Said IDF Spokesman Brig.-Gen. Yoav Mordechai,”…Jaabari is the first target… We’ve only just started, and this isn’t the end of it. All of the options are open, and we will persist in our determination to continue to hit all of the [terror] organizations further down the line.

“While we are not talking about conquering all of Gaza, there is preparation for a ground operation as well, which will be undertaken if it is necessary. The required military units that need to be diverted for such an operation are at the ready.”

A Shin Bet statement clarified that, “By nature of his position, Jaabari has been responsible over the past decade for all anti-Israel terror activity emanating from the [Gaza] Strip,” That’s a whole lot of terror activity. He oversaw the abduction of Gilad Shalit (and personally escorted him to the Rafah Crossing when he was released). And he played a major role in the Hamas take-over of Gaza from Fatah in 2007.

According to military officials, the ability to hit him was made possible through “precise intelligence” that had been gathered over a period of months. Twice before his home had been targeted but he avoided being hit; he was a very careful man. Until now. 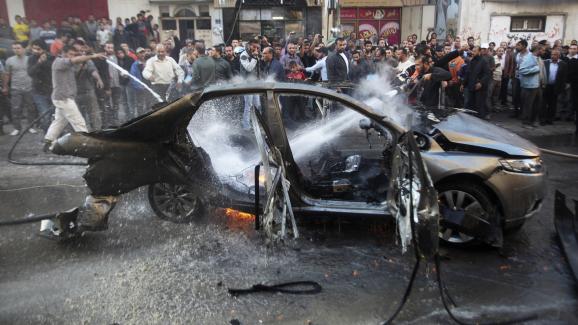 Other Israeli airstrikes today aimed for targets in Gaza City, Khan Younis and Rafah; in all, some 20 targets have been hit. Reportedly, Raed Atar, head of Hamas’s Rafah Battalion, has been killed; some of the strikes targeted reinforced silos of sophisticated Fajr 3 and Fajr 5 missiles — which have a longer range capability.

Please understand: What we have been doing in response to rocket attacks for some time now is striking against crews that had just launched rockets or were preparing to do so. Occasionally we hit a smuggling tunnel. This was of minimal concern to Hamas leadership, as there were always other crews and other launchings, and lots of other tunnels. While it was an attempt to show we were “doing something,” such action is fairly worthless as a deterrent or as reprisal.

What was done today, and presumably will continue to be done, has very real impact. Not only are we aiming to eliminate leaders who are able to plan the attacks — thus reducing the terror groups’ capacity to plan and act, we undermine morale, and strike fear in those leaders who haven’t been hit (yet). When you’re busy deciding where to hide, you have less time to plot attacks against Israel and you begin to think twice about doing so at all.

(Although, they do have the option of hiding in hospitals, as they did last time so bravely — using the sick as human shields while planning their war, confident that Israel, even knowing that they are there, would not hit a hospital.)

In addition, caches of weapons and other infrastructure will be struck. This doesn’t eliminate Hamas, or Islamic Jihad, but it’s the beginning of a credible, blow.

Of course, Hamas will not sit still for this. Its armed wing declared that Israel has “opened the gates of hell.” We’re at war now, says Hamas.

Rockets have been launched at Sderot and Ashkelon. It’s only going to get more intense and life will not be normal for the people of the south for some while. But it’s different, I have no doubt, and easier to deal with, when the government is acting.

Today, Prime Minister Netanyahu and Defense Minister Ehud Barak went north, and engaged in public discussion of the situation in Syria. There is speculation (reasonable) that this was done to divert the attention of Hamas and make it possible to catch them off guard.

In April of 2004, political head of Hamas, Abdel Aziz Ali Abdulmajid al-Rantissi, was taken out when Israel fired missiles from an Apache helicopter at his car.

That was only a brief time after Israel had hit the terrorist mastermind and head of Hamas, Sheikh Ahmed Yassin, by targeting his car.