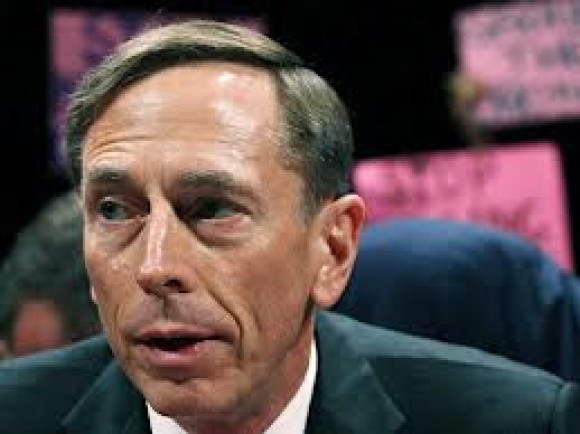 Disgraced former CIA director David Petraeus is now talking to the press and denying that he leaked classified information to his mistress Paula Broadwell. But there is no reason to believe the denial. Petraeus is an admitted adulterer who covered up an extramarital affair. He was forced to resign and has no credibility left.

Petraeus, a retired four-star Army general, spoke with Kyra Phillips of HLN, a CNN network. Phillips “described” his comments to Robin Meade on HLN’s Morning Express program. One of the big headlines from the appearance is that “he never passed classified information on to [his] mistress,” as if Petraeus can now be believed.

The big problem for Petraeus is that Broadwell publicly revealed classified information about a CIA detention facility in Libya, saying it was the real target of the terrorist attack that killed four Americans on September 11. Obama and his top officials, including Petraeus, had claimed the attack was related to a video with negative depictions of Islam’s prophet. This claim was demonstrably false.

Retired Army Colonel Ken Allard, a former NBC News military analyst and author on national security issues, notes that Petraeus had testified on September 14—three days after the attack. “It was meant to inform congressional leaders about what the intelligence community really knew,” Allard points out. “By most accounts, Gen. Petraeus endorsed the story then being touted by the Obama administration, that the attack was not terrorism but a flash-mob reacting to a YouTube clip. Really, dude? What really rankles is that the CIA director, like other senior national-security officials, is sworn to protect the security of the United States without regard to partisan concerns. How could the director, knowing what he presumably knew, give credence to what even then seemed little more than a politically-inspired cover story?”

One of the “core values” of the CIA is supposed to be “Integrity.” Its website says, “We uphold the highest standards of conduct. We seek and speak the truth—to our colleagues and to our customers.”

The CIA maintains an “Office of Congressional Affairs” that is supposed to ensure that Congress “is fully and currently informed of intelligence activities.”

The Congress was denied the truth about the murders of the four Americans in Benghazi and also denied any information about the Petraeus affair until an FBI agent came forward to Republican House members Dave Reichert and Eric Cantor a week or so before the election. He had concluded that the case was “being stalled, possibly for political reasons,” by the FBI, The New York Times reports. The FBI agent has been identified as a veteran counter-terrorism professional who apparently feared that emails traced to Broadwell and Petraeus friend Jill Kelley could expose Petraeus to foreign influence, exploitation, or blackmail.

The CIA website itself warns about the “potential for coercion” on agency employees and insists that they “abide by regulations governing the use, handling and protection of sensitive information.”

Reichert and Cantor, however, kept the information from their colleagues in the House and the American people. They turned the information back over to the FBI, which was already investigating the FBI whistleblower for opening the investigation that led to Petraeus in the first place. The FBI did nothing about Petraeus until the day of the election, when it informed James Clapper, Jr., the Director of National Intelligence, who then insisted that Petraeus resign. Petraeus did so after the election and before his scheduled testimony on what really happened at Benghazi.

Only after the election did the FBI raid Broadwell’s home to discover what classified information she may have had in her possession.

According to various reports, the Petraeus-Broadwell affair began two months after he began as CIA director in September 2011 and ended four months ago. Hence, he was living a lie as CIA director for about nine months and was subject to potential blackmail during this time.

HLN’s Kyra Phillips reports, “…he has insisted to me that he has never passed classified information to Paula Broadwell.” Speaking to her colleague Robin Meade, she added, “As long as I have known him, he has never wavered on classified information, ever. And to the best of my knowledge, you know, that has always been sacrosanct. I have also never known him to tell me something that is not true, Robin.”

But this is the same David Petraeus who acknowledged to Phillips engaging in “dishonorable” behavior by cheating on his wife and keeping the affair secret.

The CIA website declares, “To safeguard some of the nation’s most sensitive information, CIA officers must be highly reliable and trustworthy. Woven through all aspects of their performance is the imperative to adhere to the highest standards of integrity.”

In order to get a security clearance at the CIA, one must undergo an investigation that “addresses comprehensively one’s loyalty to the United States, strength of character, trustworthiness, honesty, reliability, discretion, and soundness of judgment.”

It also says, “Your responsibility to adhere to high standards of personal conduct does not end on the first day of employment. CIA employees undergo regular reinvestigations, including periodic polygraph examinations.”

Was Petraeus ever required to undergo a regular “reinvestigation?” Why doesn’t Phillips ask Petraeus about that?

By: Against All Enemies
Gulag Bound

According to the WhiteHouse.gov petition website, there is a petition from almost every state requesting that it have the right to peacefully secede from the Union (Texas example). These are not official petitions from state governments, but from individuals within the states. In effect, these petitions are circumventing the authority of the states.In response to this multitude of secessionist desires, I contend that this is not the time for secession.Over the past four years, a prominent Community Organizer has done his job agitating the people of this nation…and done it quite well. According to Saul Alinsky, that is exactly what a community organizer is supposed to do–agitate:

“Any revolutionary change must be preceded by a passive, affirmative, non-challenging attitude toward change among the mass of our people. They must feel so frustrated, so defeated, so lost, so futureless in the prevailing system that they are willing to let go of the past and chance the future.”

“A revolutionary organizer must shake up the prevailing patterns of their lives; agitate, create disenchantment and discontent with the current values….” (Rules for Radicals)

And this is exactly what has been done to us, leading some after the President’s re-election to petition for the secession of their state.

Think about it–the dissolution of our Republic is exactly what our enemies want, and if it can be accomplished through internal agitation, all the better. Secession will not happen peacefully. There are already comparisons being made between the current President and Lincoln (and a timely release of a film about Lincoln). And what did Lincoln do? Lincoln used the power of coercion possessed by the State to forcefully hold the Union together. The current President would most likely act in the same manner.

In his farewell speech, George Washington admonished us that the most important thing for us to do is hold the Union together:

“The Unity of Government which constitutes you one people…is a main Pillar in the Edifice of your real independence, the support of your tranquility at home; your peace abroad; of your safety; of your prosperity; of that very Liberty which you so highly prize. But…much pains will be taken, many artifices employed, to weaken in your minds the conviction of this truth…” He advised us to “indignantly [frown] upon the first dawning of every attempt to alienate any portion of our Country from the rest…” He also warns that “To the efficacy and permanency of your Union, a Government for the whole is indispensable. No alliances however strict between the parts can be an adequate substitute.” He states that “your Union ought to be considered as a main prop of your liberty, and that the love of the one ought to endear to you the preservation of the other…the continuance of the Union as a primary object of Patriotic desire.” (from George Washington’s Farewell Speech)

To break apart our Union would leave us vulnerable to being ravaged by foreign powers. And that is what will happen this time should our Union be dissolved.

Should secession occur, and if the military (which is largely located in self-described “red” states) not act on behalf of the federal government to hold the Union together, the President may request assistance from outside powers…”peacekeepers.” These “peacekeepers” will come from every nation that ever hoped to see the United States carved up and sold at auction–Russia, China, Cuba, Venezuela, to name a few. Carved up and occupied we will become, magnificently achieving the collectivist and globalist goal of destroying America and our freedoms, for there is no place for our freedoms in a collectivist world.

There is opportunity amidst this national crisis. As our countrymen experience the tyranny and oppression of a pseudo-socialist system, they will look for the light…for hope. Point them to our nation’s founding, and point them to God. This battle isn’t over, and we still have a chance to win. There are still Patriots left amidst our ranks, and more will flock to the cause.

We must stand firm in the Constitutional foundation of our nation and never compromise. The tyrannical opposition never compromises…they keep getting everything they want in incremental steps. And every one of those steps is a step away from our founding. We must reverse course. We must redirect this rising desire to secede into an unrelenting resolve to stop the excesses, perversion and tyranny of our government in its current form. It is time to get it back on track with our founding.

Should an all-out attempt to get our nation back on track fail and it falls into tyranny, then it would be worth considering secession. For now, we Patriots have only just begun to fight. And as a patient whose body rejects an organ transplant, the American body needs to reject this insidious organ of socialism that has somehow slipped into our borders.

Once we turn our back on the Union that we have, we will never, ever be able to gain it back.

If you would permit me a final comment, the very existence of the WhiteHouse.gov petition site undermines our republic. It smacks of serfs petitioning an all-powerful king. We are not serfs, and the President is most certainly not a king. If you want something to happen, fix it at your local or state level, and only bring it up through your representatives if it has to be dealt with on the federal level. The Executive Branch of the United States Government was not created to solve every problem under the sun…and we most certainly do not want it to.

Disclaimer: These opinions are solely my own, and do not reflect the opinions or official positions of any United States Government agency, organization or department.

To the cry of “Blood, blood, blood on your hands” and “Israel-USA, how many kids have you killed today?”, comrades from New Zealand’s most militant Marxist group, Socialist Aotearoa, hoisted the Palestinian flag over the US Consulate in Auckland. *NoisyRoom would like to extend their best to Kevin Carroll. He did not win, but fought a valiant fight and made tremendous advancements for the Freedom Party in Britain. He’s a true hero and we will continue the fight at Kevin’s side. We have just begun. 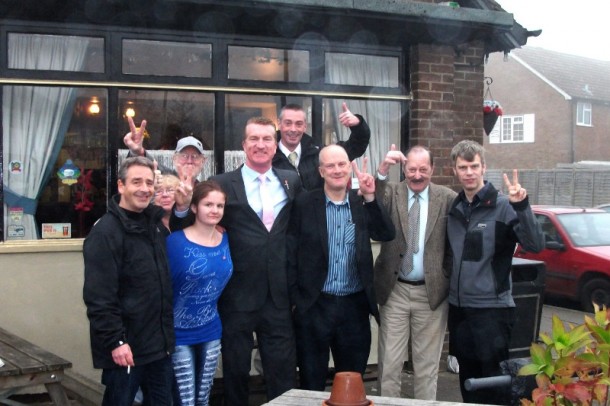