When I was growing up; mind you, I’ve never quite gotten there; but when I was packaged in a youthful frame, I enjoyed turning pages in my folk’s Compton’s Encyclopedias. These books are old; more accurately, these books are beyond ancient. I only mention the encyclopedia set because my mother said she’d looked up something in them the other day; yes, she still has this wonderful set of history books. Since she doesn’t use the Internet, they’re the closest thing to a Boolean search available to her.

Books keep the history of the world neatly bundled between the covers in a bound set of printed pages. Unlike the digital age we now live in where all you have to do is Google a key word and follow the links; investigating a subject took a little more effort. The old Comptons marked a place in time; no moment to moment updates and certainly no interactive opportunities.

Most of the photographs were in black and white; but then again, so were most of the television sets in my youth. (I apologize for having breathed out loudly enough to where you may have heard the years passing.)

To give you an idea of how old my parent’s Compton’s are, the Pan American Clipper was listed as a modern marvel which opened the world to air travelers. I recall seeing a picture of this magnificent machine landing in New York’s harbor. 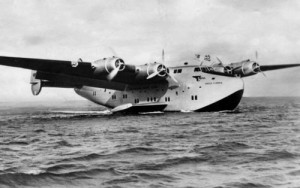 Since we’re trying to emulate Europe in every way now, perhaps I should add a “u” to harbor and ease the way for our transition toward that end, “harbour;” but I’ll get to how folks are re-writing history a little later.

Pat O’brian starred in the movie, China Clipper, “based on the true story of Pan American Airlines. China Clipper was released in (1936), only a year after the first transpacific flight in history.” It’s the story of the American can-do spirit with real men pushing themselves to the limit in order to bring about fulfillment of their capitalistic dreams; but in today’s version of, “You didn’t build it,” this story could never have been made.

The problem with relying on digital storage of information is how easily it can be corrupted. Should we trust history to the digital age?

Take the Benghazi mess which many folks in the Obama administration would just as soon sweep under the rug. The public was told the attack was in response to a YouTube video which spawned a protest, escalated into mob violence and the death of four Americans to include Ambassador Stevens.

United Nations Ambassador Susan Rice stood in front of the world and read the official message, supposedly a statement based upon information supplied by CIA Director David Petraeus and approved by the White House; basically saying, “We don’t really know what happened and are looking into it,” which as we have learned, isn’t exactly the truth.

Since that statement, we’ve found the White House had a live video feed of the attack, an attack which lasted several hours, and they knew all along it was a terrorist attack which had nothing to do with an Islamic protest over an obscure video. The entire mess apparently was associated with some black bag gun running operation being carried out at a CIA safe house; never let the facts get in the way of a news story.

We’ve also learned how short the public’s memory is when it comes to major news items. Give the major news outlets credit; they’ve covered for Obama very well. Disinformation is the name of the game rather than news reporting. At each turn of the calendar, a different spin has created the illusion that this administration is searching for the truth when in fact they are doing their level best to make sure the truth is never found.

If the truth is ever brought to light regarding what actually happened during the Benghazi massacre, Obama could very likely be impeached and many in his administration could face prison time for their roll in the coverup; but I’m getting ahead of myself.

This week in a closed door appearance before Congress, David Petraeus, former CIA Director opened the door to further speculation according to an AP story.

“Petraeus testified that the CIA draft written in response to the raid referred to militant groups Ansar al-Shariah and Al Qaeda in the Islamic Maghreb (AQIM), but those names were replaced with the word “extremist” in the final draft, according to a congressional staffer. The staffer said Petraeus testified that he allowed other agencies to alter the talking points as they saw fit without asking for final review, to get them out quickly.”

So who changed the information? The authorization to change something this important would be limited to very few and most likely it would have come from a member of the White House staff, perhaps Obama himself.

Speculating who changed key words on an official statement is about all we can do. I’m waiting for a weak link to surface; someone who doesn’t want to go to prison without clearing his/her conscience. History has shown it could take quite a long time for that weak link to offer up the real guilty parties and that might be forty years down the road as a death bed confession.

Then again there’s always the convenient death by induced heart attack or automobile accident to get rid of dangerous political witnesses. If you know the truth, watch your back. When dealing with treacherous regimes, nothing is off the table and the Obama administration was built with Chicago gangster methods since day one.

How will history be kept for future generations? Will it be recorded in black and white as printed words on paper, an encyclopedia with pages to turn or as flexible cyber documents reduced to Ones and Zeroes which can be easily altered to match the desires of those in power?