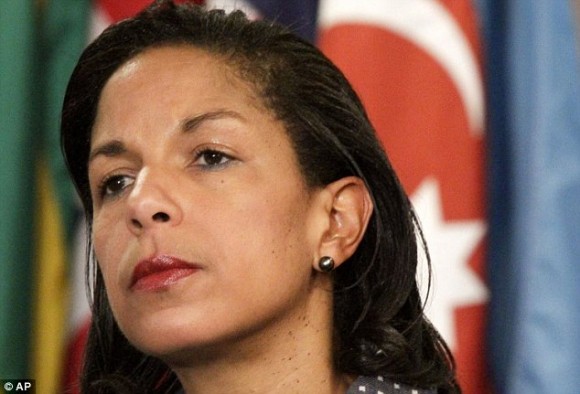 Once again, CBS’s Sharyl Attkisson is leading the way among mainstream journalists. The winner of this year’s Reed Irvine Award for Investigative Reporting is making the obvious point—that the Obama administration can’t seem to get its story straight about many aspects of Benghazi-Gate.

The issue on the table this week is why UN Ambassador Susan Rice was sent out to five Sunday talk shows on September 16th to explain what happened the previous Tuesday, September 11, in Benghazi, Libya, with talking points that proved to be false. Who asked her to be the administration spokesperson on the issue, and who changed the talking points to remove references to al Qaeda and terrorism that were in the original version from the CIA? This week, Rice was sent out, presumably to help rehabilitate her reputation before her expected nomination for Secretary of State, to replace Hillary Clinton in President Obama’s second term.

Attkisson pointed out, in an article titled “Who changed the Benghazi talking points?,” that “the question was first raised 12 days ago when former CIA Director General David Petraeus told members of Congress that his original talking points cleared for public dissemination included the likely involvement by terrorists and an al-Qaeda affiliate. Petraeus said somebody removed the references before they were used to inform the public.”

It turns out that Petraeus’ version of events changed from when he spoke to the Senate Intelligence Committee on September 13. At that time, Sen. Dianne Feinstein (D-CA) was asked by Wolf Blitzer, shortly after hearing Petraeus’ explanation, “Does it look like this was a carefully planned operation that was in the works for a while? What’s the latest assessment on that?” Sen. Feinstein replied, “I can say that I’ve seen no evidence or no assessment that indicates it was. I can certainly say that. There was a protest. And it could well be that quickly some two dozen people took that as an opportunity to attack.”

Other reports had James Clapper, the Director of National Intelligence, making the changes himself. But later it turned out, as reported by The Cable, that they were said to be made by the Office of the DNI, but not by the DNI himself.

According to President Obama, speaking at his November 14th press conference, Rice made a “presentation based on intelligence that she had received,” and it was done “at the request of the White House.” Does that mean the White House cleared what she said?

When Ambassador Rice met on Tuesday of this week with three Republican senators who had expressed serious doubts about her ability and qualifications to become Secretary of State in light of her actions, she was accompanied by the Acting CIA Director, Mike Morrell, who told the senators that it was the FBI who had removed the references “to prevent compromising an ongoing criminal investigation.”

Then the story changed again. “But it was just a matter of hours before there was yet another revision,” wrote Attkisson. “A CIA official contacted [Sen. Lindsey] Graham and stated that Morell ‘misspoke’ in the earlier meeting and that it was, in fact, the CIA, not the FBI, that deleted the al Qaeda references. ‘They were unable to give a reason as to why,’ stated Graham.”

It is incredible that at this late date, more than two-and-a-half months after the Benghazi terrorist attack, the administration is so caught up in a web of lies that they could still be making errors like this. The Acting Director of the CIA cited the FBI as the party that made the changes, and even gave a rationale for it, and then later that day another CIA official claimed that Director Morrell “misspoke,” and it was in fact the CIA. This is “The gang that couldn’t shoot straight.”

To much of the rest of the media, this is still being treated as a partisan issue. Those questioning the administration’s line are painted as sore-loser Republicans, who are sexist and racist, picking on Ambassador Rice over a minor bit of miscommunication. Richard Wolffe, formerly of Newsweek, now editor of MSNBC.com, said that Sen. McCain was pursuing “a witch hunt” about “these people of color.” When asked if McCain was “being driven by racial prejudice,” Wolffe replied, “There is no other way to look at this…”

An article in Wednesday’s Washington Post said, “Rice came face to face with some of her harshest Republican critics, hoping to allay their concerns about whether she misled Americans regarding what precipitated the assault.” There is no longer an issue of “whether she misled.” The issues are why she misled, who was responsible, and who will be held accountable. It is clear the administration is covering up a scandal. Is the cover-up worse than the scandal? That remains to be seen.

Yet, as Attkisson pointed out, White House spokesman Jay Carney told reporters on Tuesday, “I would simply say that there are no unanswered questions about Ambassador Rice’s appearances on Sunday shows, and the talking points that she used for those appearances that were provided by the intelligence community, those questions have been answered.”

Hopefully, other reporters will realize the importance of this story, and stay on it until the truth is known and people are held accountable.