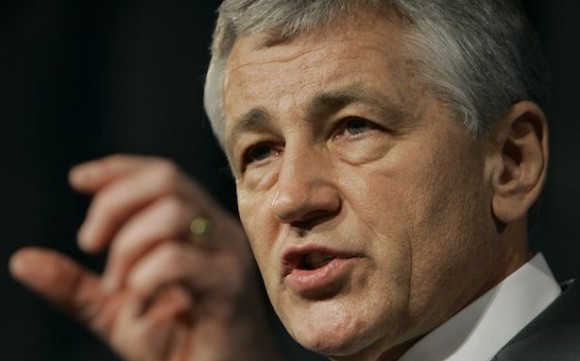 Two seemingly unrelated events—Obama’s nomination of Chuck Hagel as Pentagon chief and the sale of Al Gore’s Current TV to Al Jazeera—are coming together in a way that illustrates the role that the foreign propaganda channel can and will play if Congress lets the television deal go through.

In regard to Hagel, Breitbart blogger William Bigelow notes that Al Jazeera seems to be having a love affair with the Obama nominee. Bigelow wrote, “Al Jazeera is rejoicing in his nomination for Secretary of Defense.” Aaron Klein of WorldNetDaily notes that Hagel gave Al Jazeera an interview in 2009 arguing that the U.S. and Russia should phase out their nuclear weapons.

It also turns out that Hagel appeared on Russia Today (RT), an official mouthpiece for the Vladimir Putin regime.

At the time, Dmitry Medvedev, a Putin puppet, was the president of Russia. Asked if there was “something special” about Obama and Medvedev, Hagel said they were both young men who were “different” and “not captive to the Cold War generation.”

Obama told Medvedev in 2012 that he would have more “flexibility” to make concessions to the Russians after he was re-elected. That time is now and the Hagel nomination appears to be part of the pro-Russia strategy of making those concessions.

It is Hagel’s possible impact on the Middle East, however, that is getting most of the attention so far.

But if Al Jazeera likes Hagel, the feeling is mutual. The Washington Free Beacon has posted a clip from the Al Jazeera interview, in which Hagel agrees with the observation from a viewer that America has an image as “the world’s bully.” He clearly enjoyed the appearance on the Qatar-owned propaganda channel and thought nothing about bashing his own country.

At the very least, as the favorable coverage of Hagel shows, the new “Al Jazeera America” network that is supposed to replace Al Gore’s Current TV will be extremely left-wing in its political orientation, possibly further to the left than MSNBC.

Based on what is known about the channel and its existing Arabic and English versions, even more extreme elements will be integrated into the programming over time, once the channel gains some hoped-for traction in the media marketplace. This deception will depend on continuing inaccurate coverage of the channel’s real agenda.

The truth about Al Jazeera’s new entry into the U.S. media market is being deliberately obscured by such reporters as Dylan Byers of Politico, who cites claims about editorial independence for the new channel without bothering to note, as documented in the State Department’s own human rights report, that “the government [Qatar] exercised editorial and programmatic control of the channel through funding and selection of the station’s management.”

Qatar is an Islamic state, governed by Sharia, which supports foreign Jihadists committed to the destruction of Israel and America.

Hagel appeared on Al Jazeera as a representative of the Global Zero advocacy group. This is significant for two reasons—one of the main funders of Global Zero was the Soros-funded Connect U.S. Fund, and press relations for the group was handled by Trevor FitzGibbon, a former vice president at Fenton Communications who had also supervised media relations and strategy for MoveOn.org. He now runs FitzGibbon Media.

MoveOn.org was created as a political force, which used the Internet to save Bill Clinton from impeachment over his lies in the Monica Lewinsky affair and grew into a formidable left-wing organization active in various domestic and foreign issues, such as the Iraq War.

Fenton Communications represented Soros in 2004 when he spent millions of dollars to defeat George W. Bush for president. The firm has also represented a Who’s Who of the left, including Marxist governments in Grenada and Nicaragua, the communist guerrillas in El Salvador, and CIA defector Philip Agee.

The Connect U.S. Fund, a project of the Tides Center, provided grants to pro-U.N. groups around the country, in order to create the appearance of public support for more U.S. involvement in the U.N.

“In just a few hours,” the FitzGibbon media website says, “FitzGibbon strategists can transform a client’s news into a story on the front page of Huffington Post, book your principals on MSNBC, and schedule interviews on NPR.”

This helps explain why The Huffington Post ran the article, “Why Chuck Hagel Should Be Secretary of Defense,” on January 7. The client in this case was the author, Rick Jacobs of the Courage Campaign, a new “progressive alliance” designed to push U.S. policies further left. Jacobs chaired Howard Dean’s 2003 presidential campaign in California.

Responding to the charge that Hagel once opposed homosexuality, Jacobs assures his audience, “Chuck, like most Americans, has evolved, has changed his views on homosexuality.”

On the matter of policy toward Iran, Jacobs says, “Had America wanted an administration committed to war with Iran, we had our chance. We want and need a defense policy that defends American interests.”

The implication is that destroying Iranian nuclear weapons would only benefit Israel, and that the Obama-Hagel approach is to live with a nuclear Iran.

The media manipulation goes way back. The Global Zero website says, “Trevor has been involved with Global Zero since its launch in December 2008 and orchestrates the movement’s international media strategy. He has successfully placed Global Zero leaders in front of a wide range of audiences on shows including ‘60 Minutes,’ ‘Meet the Press,’ ‘Nightline,’ ‘The Colbert Report,’ ‘Situation Room,’ ‘The Rachel Maddow Show,’ ‘Countdown with Keith Olberman’ (sic), and networks such as Al Jazeera, BBC, CNN International, NPR, FOX, Phoenix TV (China), and NHK (Japan).”

So now we know how Hagel got that appearance on Al Jazeera. But getting Chuck Hagel on Russia Today television was equally controversial and casts doubt on the former senator’s understanding of how foreign-funded channels use Americans for propaganda purposes.

Eli Pariser, President of MoveOn.org, says about FitzGibbon: “For six years, while at Fenton Communications, Trevor was our lead media relations partner. Reporters know and love him. He’s tireless, brilliant, and he made getting MoveOn on everything from the Colbert Report to Meet the Press look effortless. Trevor’s work has been one of the keys to MoveOn’s success—we couldn’t recommend him more highly.”

It seems relatively easy for the left-wing to manipulate and use the media for their own purposes. It’s good to have all of this on the record.

FitzGibbon also represents Rebuild the Dream, the group started by Van Jones, the disgraced former communist activist fired by the Obama Administration when details about his background came to light. Natalie Foster, Co-Founder and CEO of Rebuild the Dream, says, “The FitzGibbon Media team has a rare knack for spotting what’s newsworthy, and the amazing relationships to help it get into stories and on the air. They were a tremendous help on putting our independent book ‘Rebuild the Dream’ onto the NYT Bestseller list, and continue to use the media in positioning Rebuild the Dream and Van Jones as leaders in the fight for the American Dream.”

Global Zero apparently sees no danger in this. America’s enemies and adversaries must be excited and pleased.