Personally, I’ll get to Obama’s Fabianist assault on freedom through gun control (and what we Americans are mandated by our founders to actually do, via militias) in a bit. There are so many nasty things going on… let us “shine up,” when there is cause to celebrate a victory!

Alex Jones has found the Obamaphone Lady and the Obamaphone Lady has found out about Barack Obama — and the treacherously top-down controlled two-party system, to boot! In fact, she can educate us on what she’s found of the tw0-sidedness of that debauched coin. (She had already found Jesus and vice versa as she says, which calls for eternal partying.) 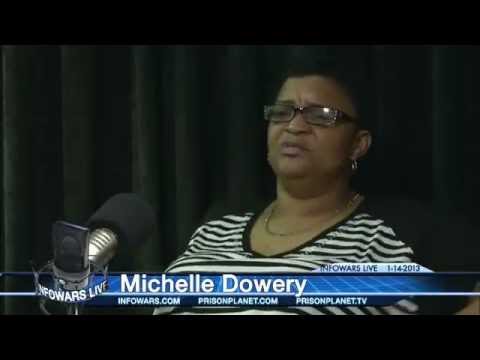 Listen to Obamaphone Lady and learn and love, America and below I’ll enter a few more comments stemming from this conversation between Michelle Dowery, her husband Harvey Phillips, and the always loose if not canonic Alex Jones.

There are times I wish Alex would have piped down and let Michelle say what was on the tip of her tongue. Further criticism of Mr. Jones has occurred in Gulag Bound (tagged, below our article) but for this, he deserves a medal. Again, I don’t ascribe to every opinion of his, nor Michelle’s, nor yours, but his work, in my humble opining including his lambasting of global-collectivist, pied piper propagandist Piers Morgan, is overall very helpful, often cutting edge, is it not?

We featured Ms. Dowery’s Obamaphone riff along with an incisive interview of Aldon Morris, “Black scholar: African Americans worse off under Obama,” back in September — now seemingly a half-life ago, politically — and I continue to suggest Morris’ examination of what Michelle herself now confirms. She gets to tell some of her story throughout the interview and only at the 32 minute mark, gets squarely to the Obamaphone.

And again I face the dilemma of whether to spend an hour excerpting and commenting or allow you to spend 38 minutes, 22 seconds to witness, less distracted, yourself, and with an interest in your liberty, mine, and my dear Obamaphoneholder’s, I choose the latter.

Huh, I haven’t even said I truly agree with Jones about the kleptocracy of the central banking system being at the core (if not the utter core) of the soft war waged against America’s sovereign People.