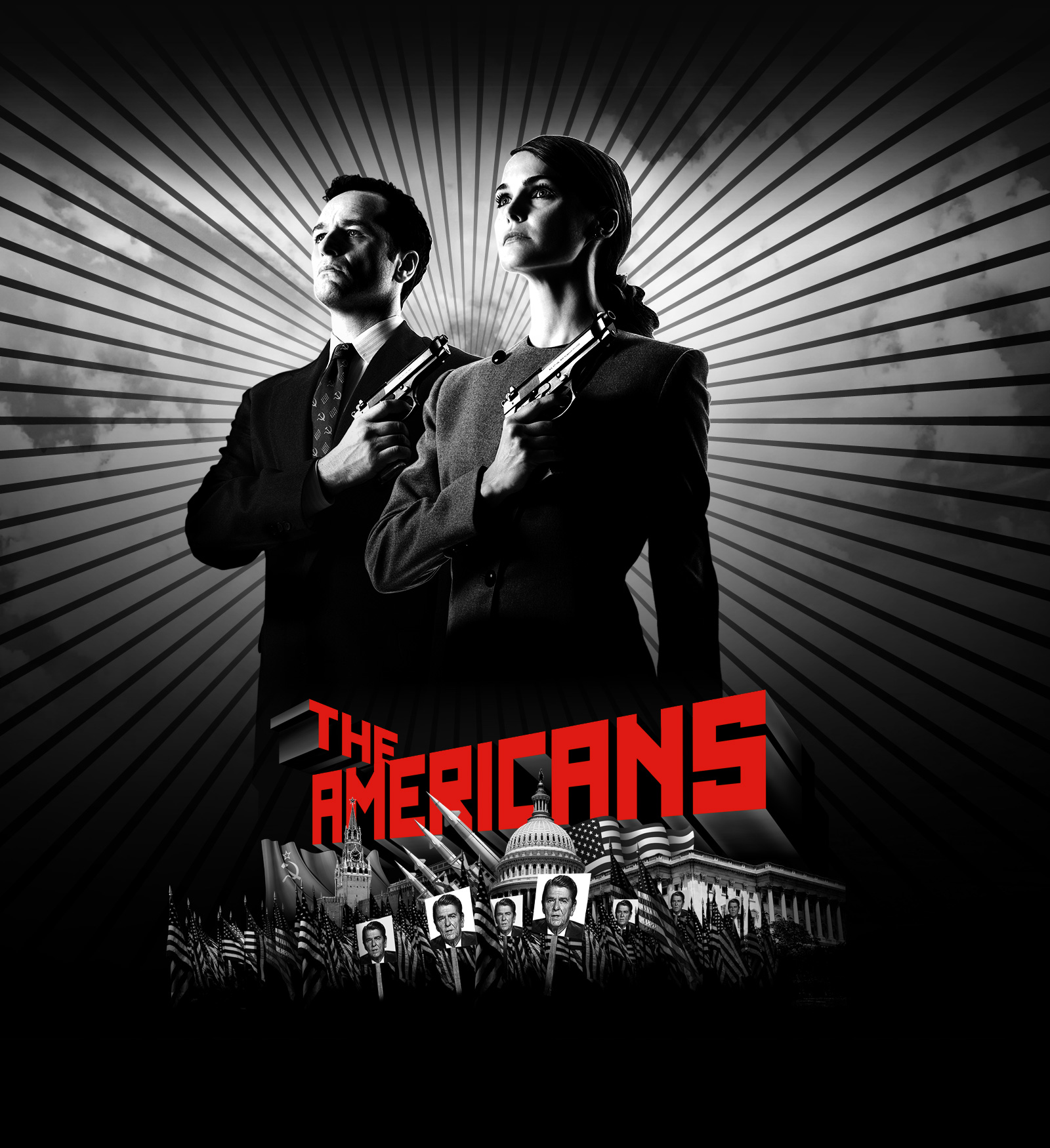 The Americans on FX

As Trevor Loudon and I have discussed numerous times, the Cold War never went away… it merely shifted. Communists never went away either – they are plentiful and infiltrated throughout our government and institutions. With the election of an avowed Marxist, they are emboldened and have whet their appetite for the downfall of a once great nation and the rise of a monolithic fascist regime, desired in their eyes and hearts, hopefully worldwide.

The Progressive’s most potent tool is propaganda, which the media and Hollywood (who are the toadies of Obama and the Leftists) wield masterfully as a powerful weapon with which to continuously bludgeon America, trying to force her into submission.

Enter a new television series premiering on FX on Jan. 30th – The Americans. 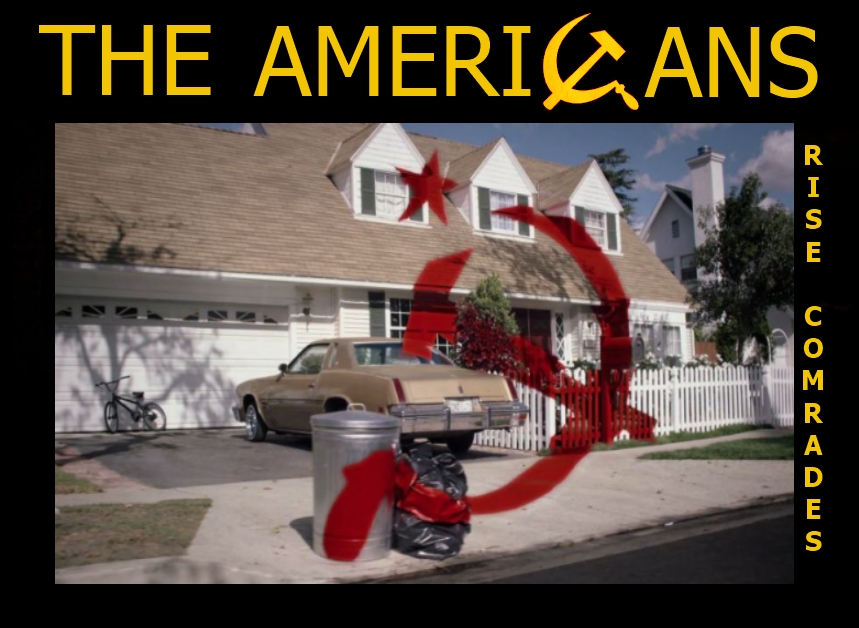 The series takes place in the early 1980s, where two KGB agents pose as an American married couple embedded in Washington DC. Their union was arranged in the old country, but glorified in America as our media works arduously at making you feel for these Russkies. Ah, young Commie spy love! Mix in some nationalism, anti-Americanism and violence and you have a new series that will blow America away (they wish).

And as Glenn Beck has predicted many times, the mask is totally coming off. The producers are not shy in stating who Americans should be rooting for:

“It might be a little different to believe and get used to, but we want you to root for the KGB,” said EP Joel Fields. “They’re going to try to get the Soviets to win the Cold War.”

History knows they’re fighting a losing battle, but the creative team behind the high-profile launch expressed a confidence that more than enough time has passed for American audiences to not hold a grudge.

“If you tried to tell a story like this about al-Qaeda now, it would be impossible; no one would want to hear it,” Fields continued. “I feel even the same could have been said up to 10 years after the cold war ended.”

Get that? Americans should now cheer for the Commies, because hey… we’re all Communists now. And the closing pitch? Well, take a gander:

As a closing pitch to root for the bad guy protagonists, Weisberg said he wanted viewers to take a hard look at both sides of the Cold War.

“These were these really competing value systems,” he said. “And there’s no question that repressive socialism failed, but unbridled consumption hasn’t exactly led to great satisfaction — and one problem is how do we express that dramatically.”

Well, rock me Putin! We should all hail Stalin and just ditch that pesky Constitution. Not. This is one Conservative Constitutionalist who will watch at least the first couple of episodes to record them in KeyWiki. In fact, they’ll get their very own page – how’s that for infamous? 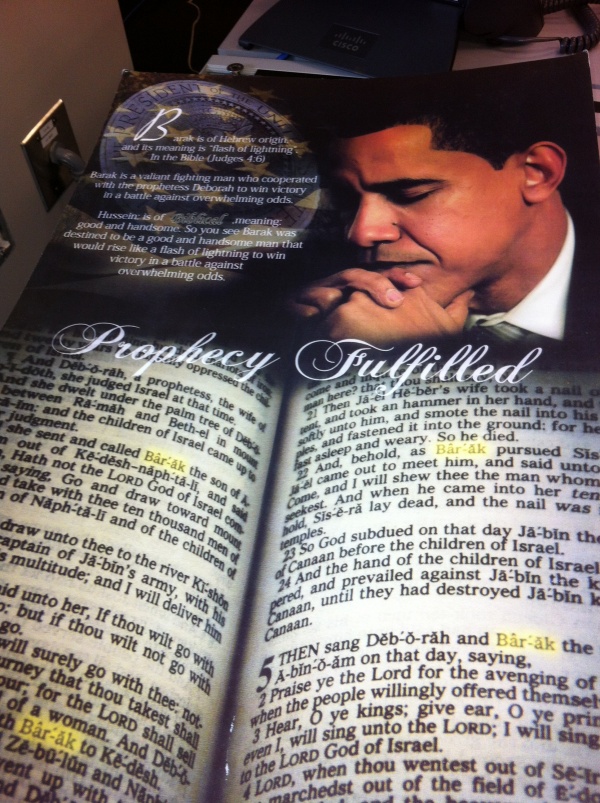 But, it’s not just our television shows that are replete with Marxist propaganda or our movies, produced by Progressives. Nor is it just Marxist actors and actresses or music performers. We are assailed by it these days everywhere we turn. It’s the ultimate in peer pressure – go Commie! Be cool!

Simply look at the President’s upcoming inauguration tomorrow (which I will NOT be watching). Above and below, you can see posters that are being hawked in DC depicting Obama as the second coming. It is the ultimate blasphemy. Running only a close second to Obama using children as human shields when railing on cable against the Second Amendment. 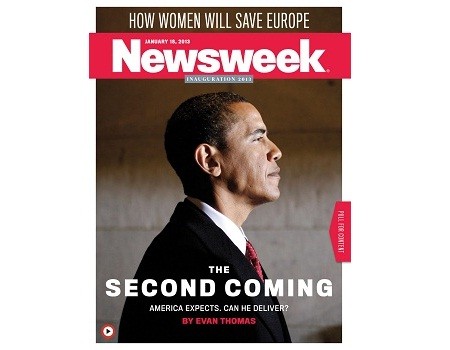 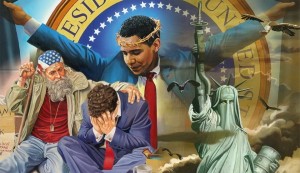 The Left would have us worship at the bloody feet of Obama – not happening. And the propaganda is insidious – watch your favorite shows very closely, you will see where it has been woven into the plots and commercials. Our media now goes where dictators in the past never had the means to go and boldly, I might add.

Then there is the other face of this chaotic coin. What you don’t hear. While Americans rightfully took to the streets in protest of Obama’s anti-gun tactics, he was pushing a full-frontal anti-Netanyahu PR campaign in Israel.

Israel goes to the polls on Tuesday January 22, 2013, in what is surely Israel’s MOST important election ever.

AND OBAMA IS IN THE THICK OF IT.

Not only is Obama telling the Israeli people through his LEFTIST media sycophants in Israel and the USA, that he DOESN’T want Netanyahu reelected, he is THREATENING the Israeli people with dire predictions of serious consequences for the future of Israel if they don’t heed his words.

I was reading Y-NET News Saturday morning (January 19, 2013), which is a popular English language VERY LEFTIST Israeli News Web Site, where they had published an editorial CASTIGATING Prime Minister Netanyahu for NOT listening to Obama.

Obama will never be satisfied until both America and Israel are on their knees awaiting gutting by our enemies. I hope Netanyahu gets reelected and tells Obama to get his Marxist snout out of Israel’s business and go straight to hell.

So, always look at what Obama is doing with one hand while he is shredding the Constitution with the other. He is not content with the level of propaganda currently, so he is going turbo by creating a mass organization promoting – well, him:

President Obama will remake his presidential campaign into a massive new movement devoted to supporting his agenda, an unprecedented move that creates a brand new political organization devoted not to a Party, not to an idea – but to one charismatic leader.

The group, to be called Organizing for Action, opens for business Sunday, the day Obama is officially inaugurated.

If this type of organization has existed before in American politics on any similar scale, I’m not aware of it.

There are excellent reasons why we haven’t had mass groups devoted to powerful leaders in this country. Our whole system of government is designed to provide checks to protect against the accretion of too much power, to forestall mob rule. A mass organization that does the bidding of a single individual who also happens to be the president of the United States undermines such intentions.

Propaganda for the masses in fascist moves that would make Hitler blush. You can no longer trust the news or the media, with few exceptions.

One of the running jokes throughout most of the Soviet dominion over Russia was this assessment of the two newspapers by the non-Communist citizenry: “There is no Pravda in Izvestia and there is no Izvestia in Pravda” or in English: “There is no truth in News and there is no news in Truth.” But this was said carefully and to people who would not report you to the Central Committee. Which, I hear, Barack Obama is forming as I write this. 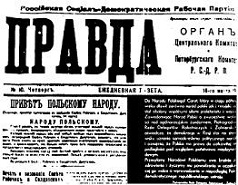 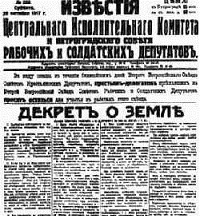 As the names of the main Communist newspaper and the main Soviet newspaper, Pravda and Izvestia, meant “the truth” and “the news” respectively, a popular Russian saying was “V Pravde net Izvestiy, v Izvestiyakh net Pravdy” (In the Truth there is no news, and in the News there is no truth).