The news sometimes seems to go around in circles, repeating itself with only the names of the characters getting changed. Take what happened this past week, for example, and tell me if it doesn’t sound familiar. That wanna-be Muslim occupier of The White House, you know who I mean, he was the candidate of The Muslim Brotherhood and The Democratic Communist Party, tried to impress his mindless electorate that he was a champion of the Second Amendment. He bragged, as he usually does, in an interview with the New Republic that he went skeet shooting “all the time” and that set off a storm of inquiries. At first no one connected with the White House could recall ever seeing Obama handle a gun let alone shoot one. So, in an attempt to quell the turbulence, the White House conveniently released a publicity photo of Barry Soetoro/aka/Barack Hussein Obama shooting a shotgun. But here is where the stories begin to fold together. The White House issued a stern warning to anyone who would take that photo and photoshop it. And as true Americans always enjoy a challenge, lots of people did.

The White House has released a picture purporting to show President Obama “skeet shooting” at Camp David. An activity he claims he does “all the time.”

The White House also warns all you mischievous internet types to not mess around with the picture:

“This official White House photograph is being made available only for publication by news organizations and/or for personal use printing by the subject(s) of the photograph. The photograph may not be manipulated in any way and may not be used in commercial or political materials, advertisements, emails, products, promotions that in any way suggests approval or endorsement of the President, the First Family, or the White House.”

In memory of Molly Norris.

Back in 2010, a Seattle, Washington cartoonist named Molly Norris took exception to some radical Muslims who threatened the creators of the TV show South Park for showing a picture of the Islamic prophet Mohammad. The true believers of Islam, the ones who devoutly follow every word in the Koran and the Hadith’s, have absolutely no sense of humor nor respect for our Constitutional Right to Free Speech. They strictly ban all kinds of music, dancing and even statues. And they are willing to cut off the heads of anyone who insults their so-called Religion of Peace. Now that is a self contradiction, if I ever heard one. Anyway, back to the story. So Molly Norris sent out a call to establish May 20, 2010 as the day “Everybody Draw Mohammed Day”. Wikipedia has the following details:

U.S. cartoonist Molly Norris of Seattle, Washington, created the artwork in reaction to Internet death threats that had been made against cartoonists Trey Parker and Matt Stone for depicting Muhammad in an episode of South Park. Depictions of Muhammad are explicitly forbidden by a few hadiths (sayings of and about Muhammad), though not by the Qur’an. Postings on RevolutionMuslim.com (under the pen name Abu Talha al-Amrikee; later identified as Zachary Adam Chesser) had said that Parker and Stone could wind up like Theo van Gogh, a Dutch filmmaker who was stabbed and shot to death.

Norris said that if people draw pictures of Muhammad, Islamic terrorists would not be able to murder them all, and threats to do so would become unrealistic. Within a week, Norris’ idea became popular on Facebook, was supported by numerous bloggers, and generated coverage on the blog websites of major U.S. newspapers. As the publicity mounted, Norris and the man who created the first Facebook page promoting the May 20 event disassociated themselves from it. Nonetheless, planning for the protest continued with others “taking up the cause”. Facebook had an “Everybody Draw Mohammed Day” page, which grew to over 100,000 participants (101,870 members by May 20). A protest page on Facebook against the initiative, named “Against ‘Everybody Draw Mohammed Day'”, attracted slightly more supporters (106,000 by May 20). Subsequently, Facebook was temporarily blocked by Pakistan; the ban was lifted after Facebook agreed to block the page for users in India and Pakistan.

In the media, Everybody Draw Mohammed Day attracted both support from commentators who felt that the campaign represented important issues of freedom of speech, and the need to stand up for this freedom, as well as criticism from other commentators who found the initiative crass, juvenile, and needlessly offensive.

Molly Norris began to receive death threats from outraged Muslims and was advised by the FBI to change her name and relocate. So in her honor and in spite of the Muslim Obama threats I have attempted to collect as many illustrations of sharpshooter Barry as I can find, just to pay homage to the young woman who came up with the original idea that if enough people create a picture to mock an overinflated ego then the powers that be cannot attack them all. Some of these people have taken the strict advice from the White House not to photoshop the original image, just to play some games with it. 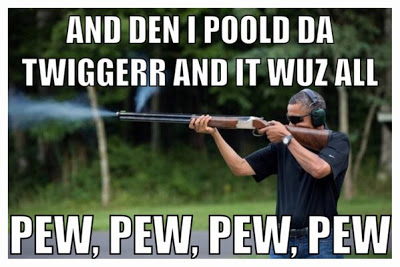 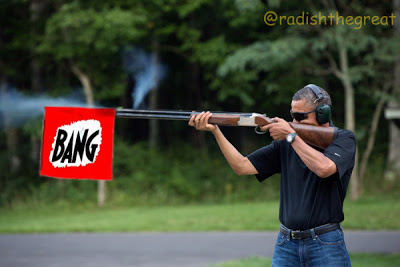 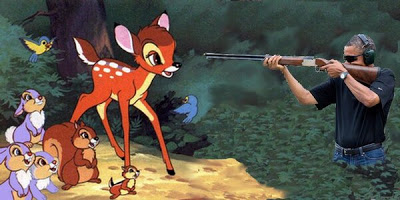 @BradThor Funny you should say that I just made this! 🙂 http://s419.beta.photobucket.com/user/jg41187/media/bin-ladengotshottonite_zpsdc199504.png.html?src=pb … 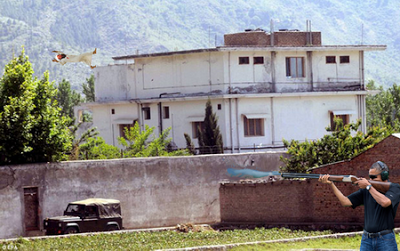 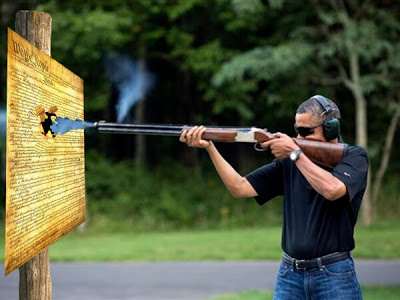 And my favorites posted on the Noisy Room:

What Obama Was Actually Shooting At
Feb 3rd, 2013 by TMH

This is two different photographs side-by-side. The one on the right has not been manipulated. Thus, it complies with the White House’s typical strangling of the First Amendment.
Visit The Unrelenter’s Facebook page…

How’s that for deflating a pompous, narcissistic ego. Here is one more that wasn’t photoshopped. 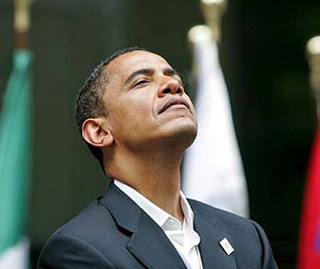 And one more that was. 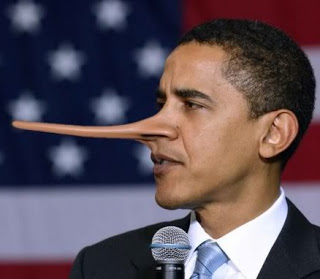 2 thoughts on “Everybody Draw Obama Day”