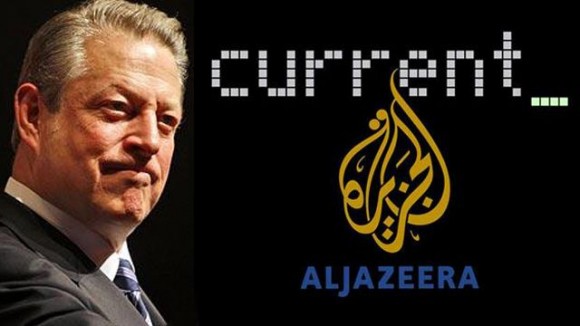 The controversy over his sale of Current TV to Terror Television channel Al Jazeera has tended to dominate coverage of Al Gore’s new 558-page book, The Future, about a “global mind” and the “planetization” of consciousness also known as “Earth Inc.” The book is as bizarre as the sale of his channel to Terror TV.

Indeed, the book sounds like something from the mind of Scientology founder L. Ron Hubbard. However, Gore claims to be serious and the book is not supposed to be science fiction.

The former Vice President, and member of Apple Inc.’s board of directors, believes in the development of a new international order, based on carbon taxes and other restrictions on our ability to produce and use energy. Somebody from somewhere will then emerge to provide global leadership that he contends we are sorely lacking. It sounds like something out of the Book of Revelation.

This gobbledygook makes you wonder whether Gore has returned to his old habit of marijuana smoking. An old friend reported that he was “an enthusiastic recreational user” of the drug in years past. The former Vice President’s own son was arrested twice on charges of possessing marijuana with the police in one case finding prescription bottles containing Valium, Vicodin, Xanax, and Adderall in his car.

For his part, Al Gore was the subject of a detailed complaint filed by a “massage therapist” in Oregon who said he acted like a “crazed sex poodle” in a sexual assault that she feared might turn into a rape. Despite claims that Gore was “cleared” of the charges, the incident was actually covered up by the local press and authorities for several years. It wasn’t until the National Enquirer broke the story that the evidence came out.

Though regarded by some as a supermarket tabloid which makes things up, the National Enquirer broke the stories of adultery by Democratic Party politicians Jesse Jackson and John Edwards, with the rest of the media struggling to catch up. Those stories turned out to be true. Although the massage therapist decided eventually not to pursue the case against Gore, her testimony, including a 78-page interview, was persuasive and convincing. Audio recordings of the victim were subsequently released by the Portland police.

Gore eventually denied the charges but later announced he was splitting from his wife of 40 years, Tipper. He got a divorce and a new girlfriend. According to a recent New York Times story, he “lives alone now, in a 10,000-square-foot colonial in Nashville, where magnolia trees shade the house and geothermal wells, buried beneath the driveway, cool and heat its 20 rooms.” A photograph on his website of his office seems to indicate that he is suffering from “paralysis of analysis,” as he is surrounded by mounds of papers and books and staring into three computer screens.

The latest entry on “Al’s Journal” is a summary of research from Media Matters, the George Soros-funded group, on how the “conservative media” have played down the importance of solar energy.

While Gore was saving the world, his family life was deteriorating. Now, in the name of saving the world, he is putting our lives in danger. Al Jazeera is the voice of al Qaeda and Al Gore knows it, although he told David Letterman that those Osama bin Laden tapes broadcast by the channel were just “misinterpreted.”

In a case of like father, like son, Gore’s father benefitted from dirty deals with the Soviet Union through Armand Hammer, the late chairman of Occidental Petroleum. Now the son profits from a dirty deal with the regime in Qatar to facilitate the entry of its Al Jazeera channel into the U.S. media market.

It is despicable, even treasonous. Al Gore and the other Democrats who had invested in Current TV, including the husband of Senator Dianne Feinstein, make tons of money, while Al Jazeera gets access to American Muslims, who are potential recruits for the Jihad on American soil.

In addition to the homeland security threat this deal represents, author Mark Musser has drawn attention to the issue of why, as noted by Al Gore himself, Al Jazeera has been covering the alleged dangers of global warming and climate change. On this point, Gore is correct. The channel has been covering something near and dear to Al Gore’s heart. Gore thinks this is great.

The explanation, however, is not that Al Jazeera is concerned about extreme weather hitting the U.S. or the rest of the world. Rather, it is for the same reason that the United Arab Emirates, a member of OPEC, funded Matt Damon’s film “Promised Land” blasting American oil and natural gas producers for a technique for extracting oil and gas from shale formations called fracking.

Musser, a contributing writer for the Cornwall Alliance, says, “…the Muslim world is far more worried that the present U.S. shale gas boom and the great successes of oil fracking will cut into their profits than they are about the environment. If the gas and oil boom continue as it is now, at some point down the road, America will no longer need Middle Eastern oil as much as it does today. Neither will it be necessary to continue to compromise with the Muslims over Israel. Neither would OPEC be able to continue to control the oil markets of the world to the extent that is seen at present. Such a turn of events would also impoverish the Muslim ability to harass and maim Israel, and help defund terrorist groups all at the same time—without firing a shot.”

This information puts the sale of current TV to Al Jazeera in a new context which also highlights its potential dangers. In this case, the new “Al Jazeera America” can be expected to push the Al Gore “progressive” view on limiting U.S. energy production. Qatar and other OPEC members will protect their profits as a result.

Still, Congress, which several years ago forced a company in the Arab state of Dubai to abandon a plan to run U.S. ports, is silent about Al Jazeera’s takeover of a cable channel reaching 40-50 million homes. It is another indication of how Republicans on Capitol Hill, led by Rep. Michael McCaul, chairman of the House Homeland Security Committee, are giving up the fight.