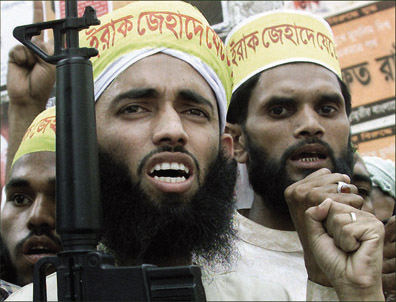 Yesterday, I received word of some horrible bombings by Islamic militants in India. 13 were killed and 70 were injured. Not a peep of this on the news. Islam is cutting a bloody swath across the planet and the media is giving us shiny things to chase after as distractions. So much for Peace be Upon Him and all that. Jihadists are murdering innocent Hindus and no one seems to care.

Then, even more comes to light as 4 are killed in Bangladesh in a violent ‘Bloggers Riot‘:

Four killed in ‘blasphemous bloggers’ riot in Bangladesh, AFP, February 23, 2013 (thanks to Kenneth)

BANGLADESH police fired live rounds in fierce clashes with Islamists demanding the execution of bloggers they accuse of blasphemy.

Two people were shot dead by police in the northwestern town of Palashbari, and two others died elsewhere, police said.

Parts of the capital Dhaka were turned into a battlefield as thousands of protesters attacked police with bricks and sticks in front of the national mosque. Officers there retaliated with rubber bullets and tear gas.

The country’s 12 Islamic parties called the protests after Friday prayers in nearly half a million mosques nationwide, demanding the execution of bloggers whom they say blasphemed Islam and the Prophet Mohammed.

Tensions have risen in the Muslim-majority nation over allegedly anti-Islamic blog posts by Ahmed Rajib Haider, who was hacked to death last week near his home in Dhaka.

And while the world turns a blind eye to the bloody massacres in India, the Mughalistan Project takes shape. It is the Islamic Pakistan-Bangladesh plan to split India. The plan is being billed as Mughalistan – An undivided Islamic nation in the Indian Subcontinent. Pakistan and Bangladesh would be connected through a land corridor running across the Indo-Gangetic plain, the heartland of India.

In 1947, India was partitioned into two countries based on religion – India for Hindus and Pakistan for Muslims. Pakistan had two parts to it – West and East. West is now Pakistan, East is now Bangladesh. The Bangladesh Liberation War in 1971 occurred and a declaration of independence was made. Muslims wanted a corridor between the two countries in 1947 to unite the country and now want it again to ensure that Bangladesh becomes Islamic. For a full explanation of this Project, read here.

Islam has totally infiltrated India. India has 29 member states and 7 union territories. Kashmir now has a population that is 97% Muslim. This has happened by highly aggressive conversions, marriages and brutal violence. Muslims now own around 100 districts in India and what they don’t own, they are now trying to take by converting owners to Islam, by using violence to drive the Hindus out or by outright theft.

In West Bengal, out of their 19 districts, 5 are now Muslim and the takeover is growing rapidly. Islam composes 40% of the population there now. In Assam, out of their 21 districts, 8 are now a Muslim majority. There are thousands of no-go areas – these are areas that only Muslims may venture into and where sharia law rules. In Uttar Pradesh, the largest state in India, the Islamic population is now 25%. In Bihar, it is 20%. Kerala – 30%. And in Jammu, it is 40%. These are the most violent territories and it is spreading like wildfire. These numbers were given to me by others living in India. In the US, we are worried about Mosques and Madrassas. In India, their entire country is being invaded; converting hundreds of Hindus every day by force and the rape of Hindu women is commonplace.

According to the last census in India, the Muslim population was 13.4%. My sources tell me it is actually closer to 35%.

If Mughalistan becomes a reality (and it looks like it is well on its way to being one), it will be the largest Islamic Republic on the planet and it will take the whole of eastern, northeastern and northern India as part of its domain. Mughalistan will be an independent homeland for the Muslims of India and it will become part of the upcoming caliphate.

Mughalistan (or Mughalstan) is the name of an independent homeland proposed for the Muslims of India. This Mughal-Muslim state in the Indian subcontinent will include all of North India and Eastern India, and will be formed by merging Pakistan and Bangladesh through a large corridor of land running across the Indo-Gangetic plain, the heartland of India. This Mughalistan corridor will comprise Muslim-majority areas of Northern India and eastern India that will be partitioned for the second time in history.

This Greater Mughalistan is of strategic significance as it will provide a contiguous, strategic corridor linking the Ummah into a pan-Islamic Caliphate. The ISI-DGFI-Indian Jihadi triumvirate has fondly nicknamed this pan-Islamic Caliphate as Islamistan (meaning “Land of Islam”), a synonym for `Islamic World’ or `Dar-ul-Islam’. This geographical Islamic crescent will link the Islamic Middle-East to Islamic South-East Asia, with the new Islamic World stretching all the way from Morocco and Bosnia in the West to Malaysia and Indonesia in the East.

Jihad manifests its hideous visage in many forms on the Indian Subcontinent as it does all over the world. What we see happening in India, Africa and other countries is a preview of events to come in the US if we are not vigilant within our borders. Islam targets and converts as many as possible and once you convert, you can never go back on penalty of death. It’s another perk of sharia law, along with removing hands and other appendages as well as hanging, stoning and beheading. Jihadists practice ‘Love Jihad’ where they target women for the sole purpose of expanding the Islamic Umma. Peaceful Hindus are murdered for their land. Slavery is common – it is called ‘Bonded Labor,’ where landlords in Pakistan chain people to their work. These slaves get one meal a day at gunpoint. They are forbidden to travel or marry. Political Jihad takes the place of rights for the Hindus. The Islamists are hellish overlords. Any religion even rumored to be worshiped outside of Islam by families will get them charged with blasphemy, which is punishable by death.

The recent bombings in Canning and Hyderabad, destroyed holy shrines and entire villages. If you speak out against them, they hunt you down and kill you. It’s that simple. And the West is complicit in keeping the conquest by Islam quiet through the simple device of deliberate media ignorance. It reminds me of those who ignored the Jews being slaughtered. For shame. Censorship and propaganda abound, just as they are beginning to take hold in the US. India not only needs help, her plight should be a rude awakening for America. We’re on the Islamic dance card.

Islam (the religion of “peace”) has discovered for itself the simple truth: violence works. In a modern world of “anti-bullying” rhetoric, no one wants to see the real bully for who he is, the sharia thug enforcer of Islam. Hoping that “maybe if we don’t look at him or talk about him he’ll leave us alone,” has never worked. It didn’t work for the victims of the pogroms, it didn’t work for those gulag-bound souls in Russia, nor again in the Asian countries conquered by assorted communists. The frightened and cowed common man and his family do their best to pretend there are no monsters, but the monsters are real, and they ravage and pillage as they come.

Islam now holds all of Western civilization in contempt. Islam knows no one has the courage to stand in its way and call its name as the monstrosity it is. Islam comes for its prey with sword and gun, shackle and manacle, prison and grave. Of course, there’s always the “easy way.” You can always just give up — and be assimilated by the Muslim Borg.

Would you want to live this way? No, you wouldn’t and our brothers and sisters in India should not be forced into this Islamic nightmare either. A not-so-silent bloody coup is going on in India while the world turns their back on peace-loving Hindus. Behold, Mughalistan and the caliphate are rising.

25 thoughts on “An Islamic Coup in India – Mughalistan”