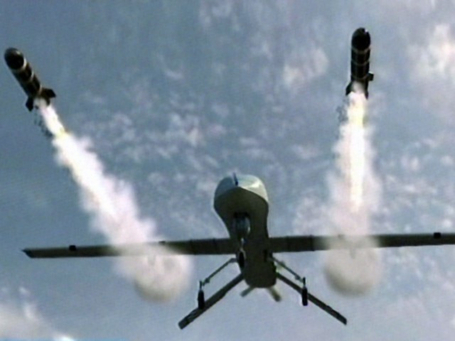 Hellfire from above, DHS from below — a match made in the fevered imagination of a reality TV producer whose material is about to be rejected for lacking plausibility. What at first appears laughable, is a security nightmare on our borders. Napolitano has drones patrolling the Canadian border, while none are stationed on the Mexican border. We are furloughing 60,000 border agents because of a fake ‘sequestration emergency,’ while obligingly granting visas to our Jihadist enemies and denying them to those shifty Europeans. America has become a security free zone, where radical Islamists come to play in the sun and kill Americans for sport. But hey… at least they aren’t using evil black guns.

America made a horrific mistake after 9-11. Actually, several. We declared a ‘War on Terror’ which was too vague and easy to manipulate. When going to war, one should name his enemy — such as radical Islam — and take the fight to them. (Of course, the assault lawyers will be quick to point out that “radical Islam” is not a nation; well, no, but neither is “terror.”) Actual war should have been declared and Iran should have been dealt with — violently. We kept claiming that Saudi Arabia was our friend, but in reality, the majority of the terrorists on that infamous day came from there. Whether sanctioned by the government or not, at the very least all dealings with Saudi Arabia should have been halted immediately (oil or not) and sanctions should have been put in place. Frankly, to this day, no one should be allowed in this country from an Islamist state without a full background check and strict security. But that would be sanity, which is in short supply in America these days. Now, our government beds down with the Muslim Brotherhood and al Qaeda – the very ones who killed almost 3,000 Americans in the most horrendous attack on American soil to have ever occurred. Our leadership is pervasively infiltrated with the very ones who murdered our people and somehow, America seems fine with that — as long as you accept that media-squelched dissent is the same as “acceptance” — and Barack Obama is aggressively furthering it.

And, in a certain sense, they’re right: Afghanistan is winding down, at best, to join the long list of America’s unwon wars, in which, 48 hours after departure, there will be no trace that we were ever there. The guys with drones are losing to the guys with fertilizer – because they mean it, and we don’t. The drone thus has come to symbolize the central defect of America’s “war on terror,” which is that it’s all means and no end: We’re fighting the symptoms rather than the cause.

Rand Paul filibustered the nomination of Brennan as head of the CIA last week. It did not stop the suicidal approval of a Muslim convert (I’m sure there is no conflict of interest there) as our chief spy (savor the irony of that for a moment), but it did bring to light the unconstitutional use of drones on American soil and the government’s claim to fame of killing Americans in the US with no warrant or due process, all in the name of the War on Terror. Our Attorney General answered Paul, saying that the US government could not blow up, mow down or generally kill Americans on US soil – sort of:

From Conscience of a Conservative: 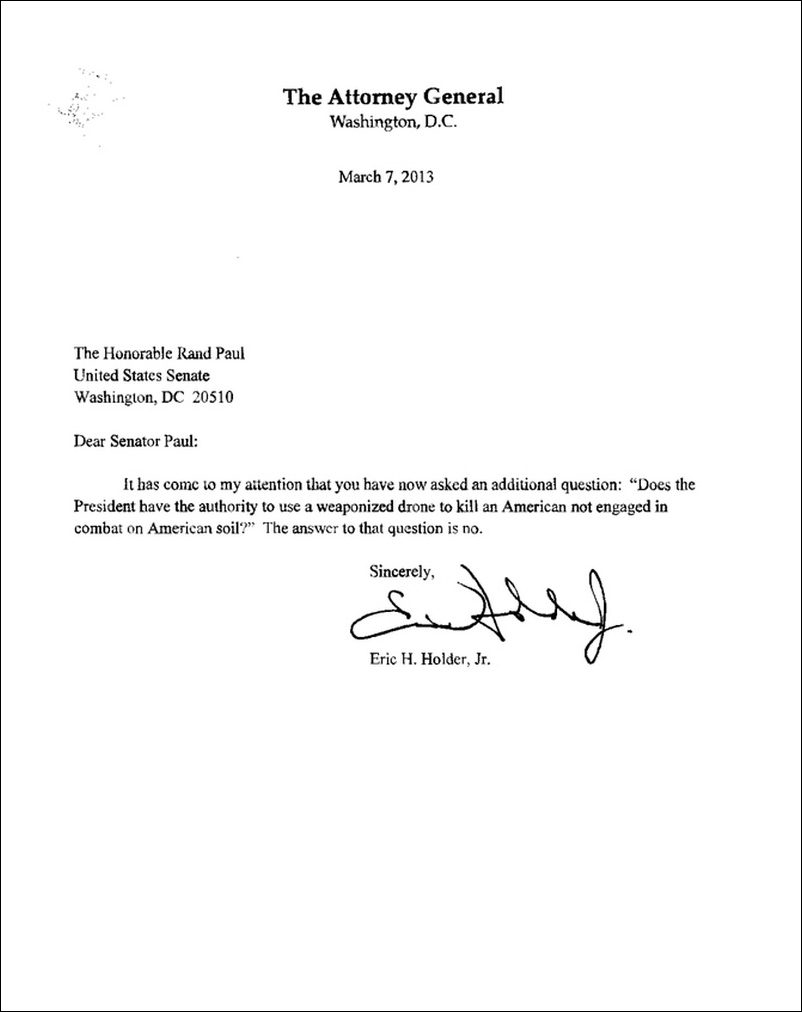 This is attorney weasel speak – please define the use of the word ‘combat.’ And it still does not rescind the previous authority for the government to attack American citizens, arrest them and detain them without trial. Actually, this leaves the issue wide open to legal interpretation where anyone that Obama does not like can be deemed to be engaged in combat on American soil. Holder might as well have inserted ‘Tea Party’ into the wording as it is obvious to most of us exactly what he meant. It all depends on what the word ‘is’ is, a la Clinton. We are still being legally screwed by Progressives. I understand taking out bad guys on our turf, but there should be Constitutional guidelines and it should be a last resort. If someone is killing or getting ready to kill lots of people, or is getting ready to nuke middle America – then drones have a place. But taking out Joe Six-Pack? Not without due process. Hunting down and exterminating Americans should never be simple. It is a kill shot too easy to abuse by anyone in power, not to mention a megalomaniac like the current Dictator-in-Chief.

The government is ramping up a police state here in America in a big hurry. With the purchase of 1.6 billion rounds of ammo, more guns than can be counted, over 2700 heavily armored MRAPs (vehicles protected against IEDs and outfitted with gun turrets — should be handy in protecting against Ma and Pa America when they get uppity and guarding against all those landmines across rural America — cleverly disguised as potholes), warehousing food and weapons – you would think that Armageddon is due just about any old time now. The federal government is arming not only local city police forces, but the Social Security Administration, the Department of Education, the IRS, the EPA and even the Railroad Retirement Board (?!). If everyone gets their very own SWAT teams, can drones for everyone be far behind? And if you think that they’ll just use them for tickets (heinous all by itself), weather reports and traffic management, you are living in LaLa Land, waiting for SkyNet to take over.

Remember Waco? Ruby Ridge? Those will look like a walk in the park if this keeps up. Any American can be labeled a combatant – any excuse will do and after the first kill and outcry, Americans are likely to accept it just as they do the TSA feeling up their children (remember, you didn’t hear any dissent, so it must have been “accepted,” right?). Obama has violated most of our Constitutional Amendments, what makes you think that he won’t use the military against us, utilizing drones to do so? He will use clever legal linguistics to step around his limitations as President and he will use executive fiat as well. An Administration that is reluctant to restrain itself from killing suspect Americans at home, will now extend all judicial proprieties to known enemy combatants, such as Bin Laden’s son-in-law in New York awaiting a civilian trial when he should face a military tribunal. He conspired to attack America and has no rights as an American citizen. But hey, one small step for New World Order, right? It’s Progressive/Marxist incrementalization.

We now exist in Droneworld and Holder’s ‘clarification’ is no comfort at all. It is alarming. Although the Senator from Kentucky did an outstanding job of filibustering and bringing this to the forefront, nothing was gained on this issue except a solidifying of resolve on the part of our increasingly militaristic police state government. And to add to the mistrust issue, the Air Force is erasing drone strike data. But, Senator Paul did get his point across — from Diana West:

Republican Rand Paul took to the floor of the U.S. Senate this week to filibuster John Brennan’s nomination to become head of the CIA. “I will speak as long as it takes,” the junior senator from Kentucky said, “until the alarm is sounded from coast to coast that our Constitution is important, that your rights to trial by jury are precious, that no American should be killed by a drone on American soil without first being charged with a crime, without first being found to be guilty by a court.”

I imagine many Americans following news of the filibuster, which lasted nearly 13 hours, were finding out for the first time that lawmakers such as Paul, Republican Sen. Ted Cruz of Texas and a handful of others are gravely concerned about a possible threat from the executive branch against these unalienable rights. This makes the filibuster a success. As Paul said, sounding the alarm from “coast to coast” was exactly his aim.

Not only can you thank Barack Obama, Eric Holder and Janet Napolitano, you can thank John McCain and Lindsey Graham for supporting and forwarding this blatant attack on Constitutional rights and the liberty of the American populace at large. Don’t believe the government and Progressives on both sides of the aisle when they tell you these are not the droids you’re looking for. No, rather, these are the droids that are looking for you. Beware the droids of March. 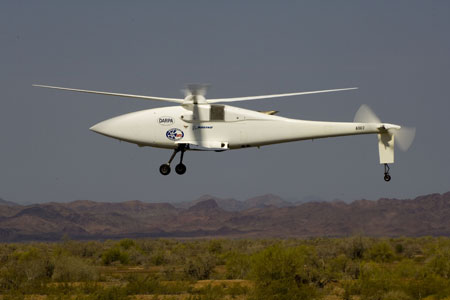 44 thoughts on “Beware the Droids of March”