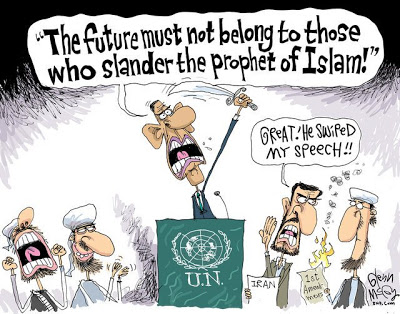 “Anti-Muslim” speech almost certainly includes truthful expositions of how jihadists use the texts and teachings of Islam to justify violence and supremacism. And so that means not only that this Justice Department initiative is an egregious violation of the First Amendment, but also that it is furthering the willful ignorance about the jihad threat that renders us all less safe.

This is a serious challenge to our most fundamental freedom. Be there.

“Feds suggest anti-Muslim speech can be punished,” by Byron Tau in Politico, May 31 (thanks to all who sent this in):

A U.S. attorney in Tennessee is reportedly vowing to use federal civil rights statutes to clamp down on offensive and inflammatory speech about Islam.

Bill Killian, U.S. attorney for the Eastern District of Tennessee, was quoted by the Tullahoma News this week suggesting that some inflammatory material on Islam might run afoul of federal civil rights laws.

“We need to educate people about Muslims and their civil rights, and as long as we’re here, they’re going to be protected,” Killian told the newspaper.

Killian, along with the FBI special agent that runs the Knoxville office, are set to speak next week to a special meeting with the local Muslim community, informing them about their rights under federal law.

“This is an educational effort with civil rights laws as they play into freedom of religion and exercising freedom of religion,” Killian said about the meeting. “This is also to inform the public what federal laws are in effect and what the consequences are.”

Killian pointed to a recent controversy where a local Tennessee politician posted a photo of a man aiming a shotgun at the camera with the caption “How to wink at a Muslim.”

“If a Muslim had posted ‘How to Wink at a Christian,’ could you imagine what would have happened?” Killian asked, according to the newspaper.

The Department of Justice did not respond Friday to a question about what guidelines it draws concerning offensive speech and Islam, or whether the department believes that civil rights statutes could be used to stifle criticism of Islam.

While threats directed at individuals or small groups can lead to punishment, First Amendment experts expressed doubt that the government has any power to stop offensive material about Islam from circulating.

“He’s just wrong,” said Floyd Abrams, one of the country’s most respected First Amendment attorneys. “The government may, indeed, play a useful and entirely constitutional role in urging people not to engage in speech that amounts to religious discrimination. But it may not, under the First Amendment, prevent or punish speech even if it may be viewed as hostile to a religion.”

“And what it most clearly may not do is to stifle political or social debate, however rambunctious or offensive some may think it is,” Abrams said.

“In its latest effort to protect followers of Islam in the U.S. the Obama Justice Department warns against using social media to spread information considered inflammatory against Muslims, threatening that it could constitute a violation of civil rights,” the group wrote in a blog post.

In recent years, the federal government has faced difficult questions about how to respond to material posted about Islam and the Prophet Muhammed — especially when the content causes riots or attacks abroad….

The questions really aren’t all that difficult. The U.S. government should protect the freedom of expression, and explain why it is important. Instead, this travesty in Tennessee.
Posted by Robert on June 2, 2013 5:13 PM

Obama: ‘The future must not belong to those who slander the prophet of Islam’
By Georgetown / On Faith

“The impulse towards intolerance and violence may initially be focused on the West, but over time it cannot be contained. The same impulses toward extremism are used to justify war between Sunni and Shia, between tribes and clans. It leads not to strength and prosperity but to chaos. In less than two years, we have seen largely peaceful protests bring more change to Muslim-majority countries than a decade of violence. And extremists understand this. Because they have nothing to offer to improve the lives of people, violence is their only way to stay relevant. They don’t build; they only destroy. […] The future must not belong to those who slander the prophet of Islam. But to be credible, those who condemn that slander must also condemn the hate we see in the images of Jesus Christ that are desecrated, or churches that are destroyed, or the Holocaust that is denied.”

Addressing the U.N. General Assembly, President Obama calls for tolerance and speaks out against violence. 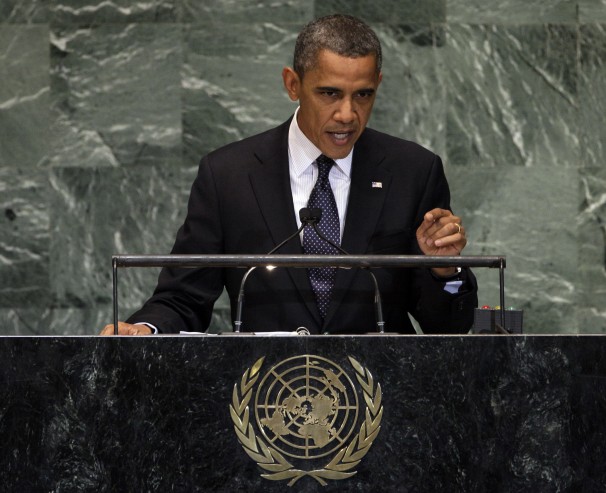