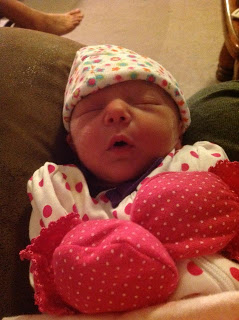 We welcomed London Renee Stern into the world last week, coming in at 4 pounds 11 ounces and all 17 inches of her healthy and strong. As far as new born babies go, that’s a bit on the small side; but we all have to start some where.

I’m told she passed her hearing test, nice to know; but how do you go about testing to see if you can hear at that age? I guess she had to raise her hand each time she heard a sound just like when we take a hearing test, “Okay, raise your right arm if you hear that…good; now your left arm if you hear it out of the other ear”, and so on. Okay, so there must be another way they test babies to see if they can hear.

When I was going through the application process to join the Houston Police Department I had to take a hearing test. An elderly lady administered the hearing test there at City Hall.

I sat with headphones over my ears while she went through various frequencies to make sure my ears worked well enough to qualify. Each time she’d ask, “Do you hear that”, she’d raise her eyebrows for effect and I’d raise my hand to indicate a positive answer, nod my head and smile in her direction regardless of whether or not I’d actually heard anything.

The fact remains, I have a hearing loss in my right ear; been that way a long time. It might have something to do with a vintage WWI Mouser rifle having gone off next to my ear while deer hunting. That sweet little lady must have taken a shine to me, perhaps I reminded her of a grandson; either way I passed the hearing test and got to be a cop for twenty years in spite of my poor hearing.

On a not so related topic, I keep reading about the folks in Washington trying to grant amnesty to millions of illegal aliens. Seems like ‘We The People’ sent a strong message, screaming at our elected officials a few years back to vote against any amnesty legislation, about 70 percent of Americans firmly against amnesty. I guess folks in Washington; their ears aren’t working so well.

A large number of Senators and Congressmen keep trying to push amnesty down our throats. Then there’s Obama who seems to think he doesn’t have to enforce laws he doesn’t agree with; so much for upholding his oath of office, the rule of law or the constitution he swore to uphold.

It must be hard to hear when your head is shoved that far up your hind quarters; one of the problems with sending elected representatives to Washington, has been for quite some time.

“Today (June 15, 2012), Janet Napolitano, secretary of Homeland Security, announced immunity from deportation for illegal immigrants who were brought to the United States before they turned 16 and who are younger than 30 – among other criteria. They can apply for a two-year work permit that can be renewed indefinitely.”

According to Secretary of State John Kerry, Obama plans to sign the U.N. Gun treaty, putting it into law via executive order in spite of bipartisan resistance in Congress; that’s what he said or am I hearing this wrong? What part of ‘shall not be infringed upon’ do the anti-gun folks not understand or hear?

America is a constitutional republic, not a democracy. That means individual God given rights, call them natural rights if it makes you feel any less threatened; but God given rights can not be voted away by legislative measures or treaties signed by a majority regardless of their numbers.

Then there’s this DNA swabbing issue the Supreme Court seems to think isn’t a violation of the 4th Amendment.

“Justice Anthony Kennedy, for a 5-4 majority, wrote, “the Court concludes that DNA identification of arrestees is a reasonable search that can be considered part of a routine booking procedure.”

‘“When officers make an arrest supported by probable cause to hold for a serious offense and they bring the suspect to the station to be detained in custody, taking and analyzing a cheek swab of the arrestee’s DNA is, like fingerprinting and photographing, a legitimate police booking procedure that is reasonable under the Fourth Amendment,” Kennedy wrote.”

Except extracting a body sample is not the same as obtaining fingerprints or photographing; taking any body tissue sample without permission or without first obtaining a warrant from a sitting judge is a violation of the 4th Amendment. Justice Kennedy is correct, at least to a certain degree, unreasonable searches by government goons might now be considered part of routine life here in the socialist states of America.

“Kannon K. Shanmugam, a lawyer for King, argued that the government has no right to forgo ordinary rules requiring a warrant and probable cause before forcing an arrestee to submit to a search involving a physical intrusion into the body for investigatory purposes.”

Shanmugam almost had it right, except he used the word right instead of power. The government doesn’t have powers given by anyone to forgo ordinary rules requiring a warrant and probable cause before forcing an arrestee to submit to a search involving a physical intrusion into the body for investigatory purposes, not even a minor invasion as Justice Kennedy put it.

I’m reminded of Ezra Taft Benson’s talk, The Proper Role of Government, where he explained in the most succinct of terms: “The important thing to keep in mind is that the people who have created their government can give to that government only such powers as they, themselves, have in the first place. Obviously, they cannot give that which they do not possess.”

There you have it, another of my rants falling on deaf ears. The list of violations against our constitution and individual liberties grows longer each day. Are you listening?

“Prudence, indeed, will dictate that Governments long established should not be changed for light and transient causes; and accordingly all experience hath shewn, that mankind are more disposed to suffer, while evils are sufferable, than to right themselves by abolishing the forms to which they are accustomed. But when a long train of abuses and usurpations, pursuing invariably the same Object evinces a design to reduce them under absolute Despotism, it is their right, it is their duty, to throw off such Government, and to provide new Guards for their future security…”

I’m still wondering how my infant grand daughter knew to raise her hand during the hearing test; kids must be so much more in tune these days. I hope she likes a good Gershwin tune or Tchaikovsky so we can enjoy these marvelous works together when she comes over. My guess is we could all end up in the same gulag for re-educational purposes and spend hours being indoctrinated with common core curriculum to assist us in becoming better subjects of the State.