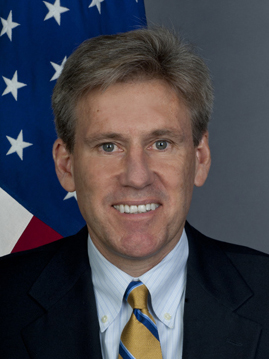 Imagine yourself trapped. A vicious gang of Islamist terrorists have already breached the main gate. If captured, you know what they do to infidels – you’ve seen video of beheadings, sodomy and etc.

Despite the smell of petroleum becoming overwhelming due to the terrorists setting the building on fire in an effort to force you out, you force yourself to remain calm and hopeful. You tell yourself, “Everything is going to be OK. I’m an American. We never leave Americans behind”.

But the Calvary never arrives to save you – not because they were not ready. The expected help never arrived because someone high in the Obama Administration, for political reasons, ordered our military to “stand down”.

Ambassador Stevens’ rescuers were ordered to “stand down”.

Assuming that the Calvary in the form of air support is on the way because Americans are under attack and we never leave Americans behind, you use your laser to mark the enemy’s location. This will assist our guys in launching their aerial attack. But your assumption that help is on the way is wrong.

Our planes are not in the air because someone high in the Obama Administration, for political reasons, ordered our military to “stand down”. All your laser did was tip off your location to the Islamist terrorists. Former U.S. Navy SEALs Tony Smith and Glen Doherty were killed. Why? Because someone in the Obama Administration gave the order to “stand down”.

In their continuing effort to protect Obama at any and all cost – which includes national security and the lives of Americans, the mainstream media promotes the narrative that the American people do not understand or care about Benghazi. They attempt to brand everyone investigating Benghazi as partisan racists out to get the president.

While low-info Americans may not understand the politics, they can relate to the betrayal of being abandoned by ones country. Most Americans are aware of our tradition and ethical code of never leaving an American behind.

If a republican were in the White House, the mainstream media would be investigative pit bulls, all over the Benghazi scandal “like white on rice”, as my late momma would say.

And yet, remarkably, several months after the attack on our consulate and the murder of four Americans, the mainstream media does not appear to have the slightest curiosity about who in the Obama Administration gave the order to our military to “stand down”. Despicable!

Stand down. Folks, I can not let it go. While Americans feared for their lives, waiting, hoping and expecting help, someone in the Obama Administration said, no, we are not going to send help.

While Obama’s protective mainstream media refuses to care, my fellow Americans and I care deeply and will discover, who in the Obama Administration gave the order to “stand down”? 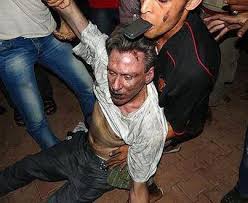 2 thoughts on “No, We Will Not Let it Go! Who Gave The Order To Stand Down?”