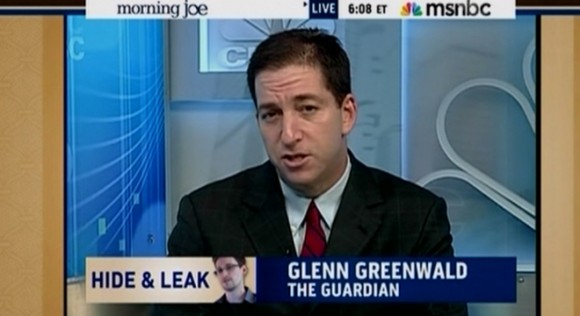 The mouthpiece for NSA “whistleblower” Edward Snowden is having the whistle blown on him, and he doesn’t like it. Glenn Greenwald of the Guardian says “smears” are being circulated about him owing back taxes, financial debts, and investing in a homosexual pornography business.

The New York Daily News reports, “The reporter who broke the story about the National Security Agency’s secret surveillance programs has a little secret of his own.”

Greenwald, an American who is gay and lives in Brazil with his “husband,” is accused of involvement in a business marketing videos on such sites as “hairystuds.com” and “studmall.com.”

Greenwald claims the allegations are “personal attacks and smears” and calls the gay pornography “adult videos.”

He says, “I’m 46 years old and, like most people, have lived a complicated and varied adult life. I didn’t manage my life from the age of 18 onward with the intention of being a Family Values U.S. senator. My personal life, like pretty much everyone’s, is complex and sometimes messy.”

Greenwald also maintains that questions about whether he should be “prosecuted for my reporting on these stories” are also part of the effort to smear him.

But as we have reported, the evidence is clear that Greenwald broke the law in reporting Snowden’s disclosures about the NSA terrorist surveillance programs. Like Snowden, Greenwald could be charged with violating U.S. espionage laws.

While the charges and counter-charges are getting some attention from the media, Greenwald’s involvement in a Marxist-Leninist political organization has been carefully ignored.

On Friday night, however, Glenn Greenwald will return, via Skype, to an annual socialism conference co-sponsored by the International Socialist Organization, the publisher of Socialist Worker. This is a far-left Marxist-Leninist group.

The Socialist Worker published a June 23 story referring to the execution of Soviet agents and nuclear spies Ethel and Julius Rosenberg as “a cold-blooded double murder committed by the U.S. government in the name of national security and the Cold War fight against communism.”

The article claimed that “…the true criminals in the case of Ethel and Julius Rosenberg—sent to the electric chair on June 19, 1953, for allegedly conspiring to commit espionage—were the law enforcement agents, prosecutors, judges and all the government officials who helped to frame and execute them.”

In fact, some of the strong evidence of the involvement of the Rosenbergs in espionage came from the Venona program of the U.S. Army’s Signal Intelligence Service, the precursor to the National Security Agency (NSA). Venona monitored Soviet messages to intelligence agents in the U.S.

The NSA programs exposed by Greenwald and Snowden involve the monitoring of foreign terrorists and their American agents.

The Associated Press reports, “Two U.S. intelligence officials say members of virtually every terrorist group, including core al-Qaida members, are attempting to change how they communicate, based on what they are reading in the media, to hide from U.S. surveillance.”

Greenwald’s involvement in the “Socialism 2013” conference on Friday has gotten the attention of the BigJournalism.com website, which had previously been sympathetic to the Guardian columnist. Jeremy Segal reports, “Greenwald’s associations with radical Marxist organizations, such as the International Socialist Organization, and his participation in their revolutionary conferences, while at the same time, protecting his source, Eric Snowden, who has been on the run in Communist China and Russia, certainly raises eyebrows about Greenwald’s intentions.”

Many in the conservative media have been slow to recognize the left-wing nature and purpose of the Snowden-Greenwald alliance against the NSA.

But as we previously reported in our column, “Glenn Greenwald Regularly Attends Marxist-Leninist Conferences,” Greenwald works hand-in-glove with the International Marxist movement against the United States and its allies and this fact helps explain why China, Russia and other American adversaries and enemies stand to benefit from his disclosures.

A website for the “Socialism 2013” conference quotes Greenwald as saying, “I’m unable to attend due to matters relating to the work I’m doing on the NSA stories,” but he “still very much wants to speak at the [Socialism] conference,” and will Skype in.

Their response: “We are very excited that Glenn Greenwald is taking the time to speak about his important ongoing investigation at our conference. Stay tuned for more details about a special Friday evening session with him!”

The conference website says Greenwald speech will be livestreamed from the Socialism 2013 Friday night event.

Greenwald will be introduced by Jeremy Scahill, a Puffin Foundation Writing Fellow at The Nation Institute. Scahill is the author of Blackwater: The Rise of the World’s Most Powerful Mercenary Army, and a book and film by the name of “Dirty Wars,” about U.S. counter-terrorism efforts.

A guest on foreign propaganda channels like Al Jazeera and Russia Today (RT), Scahill believes that attacking terrorists abroad is counter-productive and maintains there is “nothing more powerful than someone that has a legitimate grievance against you and a will to fight you, and we’re giving people that grievance and will.”

Greenwald says of Scahill: “There is no journalist in America who has exposed the truth about U.S. government militarism more bravely, more relentlessly and more valuably than Jeremy Scahill. “Dirty Wars” is highly gripping and dramatic, and of unparalleled importance in understanding the destruction being sown in our name.”

In light of the Supreme Court ruling in favor of homosexual marriage rights, Greenwald now says he may move back to the U.S. with his homosexual partner.