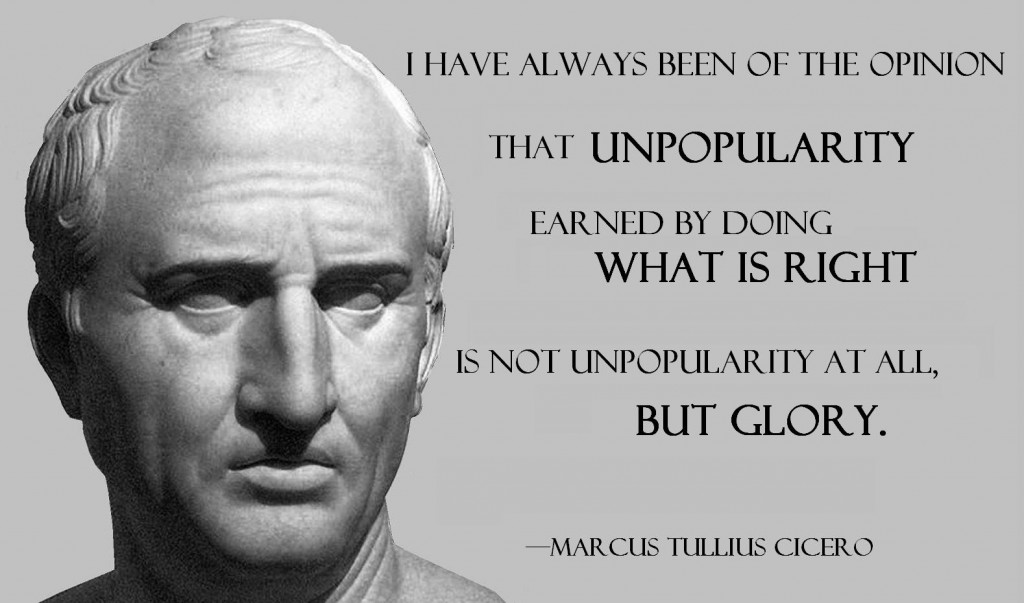 “A nation can survive its fools, and even the ambitious. But it cannot survive treason from within. An enemy at the gates is less formidable, for he is known and carries his banner openly. But the traitor moves amongst those within the gate freely, his sly whispers rustling through all the alleys, heard in the very halls of government itself.

For the traitor appears not a traitor; he speaks in accents familiar to his victims, and he wears their face and their arguments, he appeals to the baseness that lies deep in the hearts of all men. He rots the soul of a nation, he works secretly and unknown in the night to undermine the pillars of the city, he infects the body politic so that it can no longer resist. A murderer is less to fear. The traitor is the plague.”

This week’s winner, Joshuapundit’s Fear And Loathing In DC – The Gang Of Eight’s Amnesty Bill Is A Disaster, is my take on the abysmal amnesty legislation the Senate just passed, written right after the bogus Corker-Hoeven Amendment surfaced from the ooze and before the actual vote. Like ObamaCare, it’s a supremely bad idea and something foisted on us by our Ruling Class in spite of vast opposition by the American people they supposedly serve. Here’s a slice:

Today at 5:30 PM, the United States Senate will vote on an important part of the Gang of Eight Amnesty bill, the Corker-Hoeven amendment. Majority Leader Harry Reid is rushing the nearly 1200 page bill through even though the Senate has only had a chance to look at it for a mere 72 hours.

When you actually go over this bill submitted under the guise of ‘immigration reform’, you realize how awful it really is.

The language of the bill reminds me of the the Affordable Care Act, (AKA Obamacare) in that it’s filled with (a) obtuse, dense language that clues us in that it is deliberately deceptive (b) glosses over the real issues involved and (c) is absolutely filled with waivers, exemptions and exceptions left to the sole discretion of political appointees and language like ‘the Secretary, in the Secretary’s sole and unreviewable discretion, may waive…’

‘Sole and unreviewable discretion’? Just imagine what an Obama appointee like Janet Napolitano is going to do with that.

They denied it for a long time, but the bill’s proponents have finally admitted that this is an amnesty bill, and as even Senator Marco Rubio admitted back when he was trying to get elected with Tea Party support, the ‘path to citizenship’ rhetoric is just a euphemism for exactly that.

If the estimates on illegal migration into the U.S. are correct, we’re talking about 11.5 million people, except that when we include chain migration and family unification (which the bill doesn’t prohibit) we’re probably talking about 25 million or more. But let’s just talk about the estimated 11.5 million whom are here for now. Anyone who was in the U.S. prior to 2012 qualifies, but since the bill doesn’t call for any definitive real proof, fraud is going to be rampant.

The entire concept of amnesty is an interesting one, as is the idea of terming it immigration reform.

It basically turns the entire idea of immigration inside out.

Rather than it being a privilege extended by a sovereign nation to people it decides to welcome legally to fill its own needs, amnesty makes it a right, an entitlement.It’s no accident that many people in the amnesty lobby refer to themselves as ‘immigrant rights activists’.

The obvious that’s unsaid given the demographic makeup of the vast majority of illegal migrants is that it’s a right because this is supposedly ‘stolen’ Mexican land, something only groups like MeCha and La Raza say openly. But the context is obvious.

If that’s the actual argument, that America has no sovereign rights over a part of its territory the Treaty of Guadalupe Hildalgo notwithstanding, fine. But that’s a separate argument.

The idea of ‘immigration reform’ is likewise interesting. Real immigration reform might involve cutting some of the immensely complicated and expensive red tape involved when an American citizen falls in love with a foreign national and wants to bring their spouse home to live, or when an American corporation wants to import a foreign scientist or technical expert to work here.Or creating a points system based on needed skills, English proficiency, ties to America or the willingness of an entrepreneur to bring financial capital to invest to start a business.

Nothing much is going to be ‘reformed’ for the 4.6 million legal immigrant applicants to America stuck in those situations. No one wants to discus how fair it is to give the 11.5 million people who are here illegally priority over the suckers who decided to follow the law and come here legally. Instead, we’re going to create special rules that apply to no other immigrants but a select group largely made up of one demographic who merit this special treatment strictly for political purposes.

A potential legal immigrant from Europe or Asia would hardly be unjustified in calling that unfair and racist. It is. One of my correspondents, an English speaking Dutch software engineer with 3 inches of degrees after his name, over a decade’s worth of experience, and a totally clean record finally gave up after spending a year and thousands of dollars trying to jump through the hoops ICE put in front of him and emigrated with his family to Israel, where they jumped at the chance and slashed red tape to get him. In America people like my engineer friend will go to the back of the line behind an unskilled laborer from Sinaloa or Nuevo Leon with limited or non-existent English and an 8th grade education. The current amnesty bill would exacerbate this situation even more.

I’ve had some experience in conducting negotiations where there are diverse views involved. Here’s a fairly ironclad rule; when people’s goals are the same but their ideas on what mechanics to use to achieve them are different, consensus is usually attainable. But when their actual goals are different, actual consensus is excruciatingly difficult, and what you normally get instead is game playing, lies and deception.

What we’re seeing here is the second scenario.

In our non-Council category, the winner was The Sad Red Earth with “It goes without saying”: the Further Rhetoric of Terrorist Apologia, submitted by Simply Jews. It’s a wonderful examination of the perversions of language and rationalizations used by a class of people I refer to as ‘terrorist groupies’. Do read it.