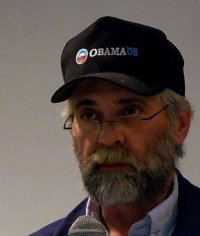 Mark Froemke is a Minnesota/North Dakota Communist Party USA member and has been President of the Western Area Labor Council (AFL-CIO), which represents union members in 11 North Dakota counties and 7 Minnesota counties.

Mark Froemke actively campaigned for Barack Obama in 2008 and has been a strong advocate for Obamacare.

AFL-CIO delegates from Minnesota unions were enthused by President Obama’s speech to the labor federation’s national convention in September 2009.

“Obama has reached out to labor – and now union members must respond,” said Mark Froemke, a member of the Grain Millers union and delegate from the Western Area Labor Council in Crookston.

“It’s for us in the unions to push hard to make sure the public option (for health care) is there in the end,” he said.

Mark Froemke and his wife LaVonne Froemke are both also active in the Democratic-Farmer-Labor Party, the Minnesota affiliate of the Democratic Party.