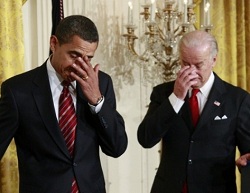 The Brits just told you “F NO!”. I’d say that calls for a face palm.

Obama is consistent. You’ve got to give it to him on that. He consistently attempts to subvert the Constitution, gets away with whatever he can and pushes the rest as far as it will go and then lies about the nature of the failed attempt. It’s tiresome at this point, but his audacity seems to have shaken a few from their slumber and lethargy. We don’t know how long we can keep them awake, so keep shaking them, get them on their feet, make them walk around, drink some coffee, cola or maybe one of those 5 hour energy deals. Anything. What awakened the sheeple to a somnambulant state? Obama’s stated intention of dragging us into a conflict in Syria, evidently.

Obama got the dog out and was all prepped and geared up to wag that pup and then the unthinkable happened. Waggus Interruptus. Terrible thing. Those damn Brits. Oh, not David Cameron – he had his dancing shoes on and in fine fettle to do the Philly Dog. Nope, it was those recalcitrants in Parliament that peed on the parade. Not only did Cameron look flaccid, but apparently such a smackdown has never occurred in modern history.

Britain has always compliantly and eagerly swung from America’s balls. Not this time. In fact, the Telegraph reports that it is the first time in 57 years that a British Government has been blocked by Parliament from executing a military deployment and highlights the deep mistrust of official intelligence in the wake of the Iraq war. Why would that be, I wonder? Couldn’t have something to do with a collective sense of having been snookered for the better part of a decade by the last P.M. as regards all things War On Terror? It might have something to do with the British people themselves waking up and smelling the Kim Chee, then giving the one handed clap to Cameron and his lame portrayal of Tonto to Obama’s Lone Ranger. 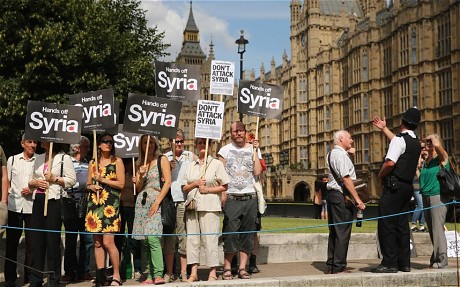 The British answered the same wake up call that we did, along with the Germans, French and Italians.

It wasn’t just the House of Commons that responded with a resounding nay to Cameron’s expressed desire to ride shotgun in Obama’s pickup. Lord Hurd, the former foreign secretary, expressed the majority sentiment in saying:

“I cannot for the life of me see how dropping some bombs or firing some missiles in the general direction of Syria, with targets probably some way removed from the actual weapons we’ve been criticising, I can’t see how that action is going to lessen the suffering of Syrian people. I think it’s likely to increase and expand the civil war in Syria, not likely to bring it to an end.”

The White House remains in a state of stunned incredulity. This is not the way things ordinarily work. What normally happens, is that the puppetmasters decide that injecting the American military into a conflict on false premises is favorable to their overall plans and profitable, to boot. They then send instructions down to the President and he jumps on them like a short order fry cook, with a lunch counter full of hungry teamsters. Next, warships are deployed, the United Nations is petitioned, our staunch ally Great Britain gets its ducks lined up and things get underway. The President may blow a kiss to Congress at some point – usually after the machinery is in motion.

The U.N. thing is symbolic, if only to demoralize the bitter clingers and signify that the matter of the Constitution is superfluous and trivial. If the U.N. gets cold feet or just decides to play the contrarian – as the Russians and Chinese do, almost reflexively, the Imperial President can still assemble a ‘coalition of the willing’ and move forward. What do you do if the other members of the Players Club won’t answer the telephone? That’s where the string pullers learn how intrepid their puppet is. They found out. Either this one can’t get it up, or possibly Chapter 322 (Skull and Bones), concluded that a recalculation in tactics was in order. The Telegraph again details the timeline of the Obama White House’s fits and starts with the Syria campaign:

Last Sunday, it issued a statement dismissing the need to wait for United Nations investigators because their evidence, the statement said, had been corrupted by the relentless shelling of the sites. By Monday, Secretary of State John Kerry, who had long advocated a more aggressive policy on Syria, delivered a thunderous speech that said President Bashar al-Assad was guilty of a “moral obscenity.”

By midweek, administration officials were telling reporters that the administration would not be deterred by the lack of an imprimatur from the Security Council, where Syria’s biggest backer, Russia, holds a veto. As of Thursday night, the White House was drawing up plans to act unilaterally.

On Friday, Obama, after receiving a letter signed by 140 Members of Congress, urging him to submit his plans to them first – decides to sit tight for the moment. In order to save face, the Obama White House has staged some Kabuki theatre, designed to make it appear that there was a lot of internal debate between the President and his senior advisers. This is typical damage control with the objective of providing the President’s partisan spokesholes in the legacy media with talking points portraying Obama as ‘deliberative’. But we’ve seen the act too many times.

NBC, for one, is clearly regretting even Obama’s faux posture of deference to Congress. Andrea Mitchell:

“Barack Obama, as you know better than I do, was one of the leading Democratic politicians against the Iraq War. So if he says that this is different, that the evidence is there….does that persuade you since he has always come at this from a very cautious anti-war perspective?”

My answer? No. Here you have a President that initially thought he had the juice to open the ball on a missile launch against a country that has not attacked us, and Andrea Mitchell is framing him as being ‘anti-war’? Another NBC piece on ‘World News’, features this line of argument:

For the past 30 years, U.S. presidents have tried to ramp up the powers of the executive branch on national security issues. Presidents Ronald Reagan and Jimmy Carter, for example, exercised military might without a vote in Congress. Obama’s decision on Syria represents a clear reversal of that trend, observers say. And his deference to congressional lawmakers could create a political, and potentially legal, precedent that may cast a shadow over future administrations. Obama also now runs the risk of losing the vote on authorization in Congress, leaving him with his hands tied despite previous pledges to intervene if Assad used chemical weapons.

Can you see the hand wringing and the apprehension over the possibility that the established behavior of the Imperial Presidency might be severely curtailed?

Obama is now dispensing platitudes such as the following, “I’ve long believed that our power is rooted not just in our military might, but in our example as a government of the people, by the people and for the people.” That’s in one breath, but as is universally the case with him, he hedges it by saying he’s not obligated legally to consult Congress – he’s just doing it for appearances. In fact, some of Obama’s strategists cautioned him not on Constitutional grounds, but on the likelihood that when Obama comes back to Congress at some undefined time in the future asking it to rubber stamp an attack on Iran, that they may be difficult to manage if he shoulders them out of the way here.

We’re not out of the woods yet on this – not by a long shot. Obama is going to do a full court press in Congress. He still wants to demonstrate his manhood and redeem himself with the Übermensch at Chapter 322. Obama intends to present a draft of an authorization to initiate military force in Syria. Concerning the draft resolution that has been examined by the media and foreign policy experts:

“These details may not matter much if all the president intends is a modest shot across the bow, as he suggested a few days ago,” said George Mason University School of Law Professor Ilya Somin Sunday. “But they could be significant if U.S. military intervention goes beyond that – including if it ends up expanding farther than the president may have originally intended.”

Publicly, Obama has repeatedly said that “we would not put boots on the ground.” His proposed authorization, though, did not limit the kinds of military forces that could be used. It also does not specify the forces against which force can be used. “It would likely allow him to use force against Syrian rebels as well as the Assad regime, if it seems possible that the former have obtained chemical weapons or are likely to do so,” Somin said.

And there are Republicans beating the drum to set in motion a police action against Syria.

McCain has already imagineered a strategy:

McCain said his plan could be done very easily with “no boots on the ground” and “would not put a single life at risk”. In a matter of a couple of days using standoff weapons, we could take out their runways, take out the 40 or 50 aircraft that they’re using which is dominating the battlefields and the towns and the cities. We can supply the right kind of weapons to the rebels, establish a no-fly zone by moving Patriot missiles up to the border.”

As the great Mark Twain once mused – “to a man with a hammer, everything looks like a nail.” Lindsey ‘Lohan’ Graham also has assumed the position – no surprise there either. But Obama has allies among your beloved GOP leadership in the House as well. Peter King (NY) has already called out Obama for not manning up and “abdicating his responsibility as commander-in-chief”. And then there’s Mike Rogers – “I think at the end of the day, Congress will rise to the occasion,” Rogers of Michigan said on CNN. “This is a national security issue. This isn’t about Barack Obama versus the Congress. This isn’t about Republicans versus Democrats.”

Of course it isn’t, Mike. It’s about people who respect the Constitution versus people who don’t – such as yourself. Democrats, by and large, will go along with the President, because it’s more important to their party to avoid embarrassment to their head honcho than to keep us from throwing matches in a storage shed full of dynamite sticks.

The House GOP? Well, let’s just say that you’re going to learn everything you need to know about which of them are representing you or working for the interests of those who stand to benefit from more deficit spending on military stunts. According to the Washington Post – Rep. Scott Rigell (R-Va.), who led the push to force a congressional vote on military intervention, said “80 percent” of the skeptics in the room doubted that a limited strike would achieve any clear result and might instead lead to bad consequences. “There is more a question of,” he said, “is this the right approach?”

Here’s the pitch that all of the lawmakers are going to be hearing from the big spenders on K Street:

“Yeah, that Constitution thingy – I get it. It’s kind of a persistent nuisance, but come on – let’s do a work around on this because KBR, General Dynamics, Lockheed-Martin, L-3 Communications, Raytheon, Northrop-Grumman, Boeing and our banking friends on Wall Street are really counting on us.” 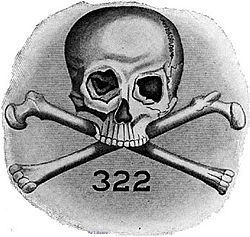 If you want an invitation to this club, Secretary of State John Kerry is the man to see.

Win the tug of war against these leeches and you’re well on your way to getting your country back.