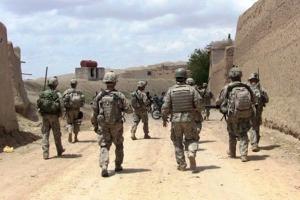 While our leaders in the House decided not to vote on Obama’s Syrian war (because it was just too embarrassing a defeat for the Marxist-in-Chief), the threat of war has not gone away. The claim of ‘no boots on the ground’ has turned to ‘well, maybe:’

The White House and the Pentagon have repeatedly ruled out “boots on the ground” in Syria, but Defense Department officials were less certain Thursday on whether U.S. military personnel might be sent to help secure or destroy Syria’s chemical weapons.

Pentagon Press Secretary George Little gave a vague answer when asked if U.S. troops were prepared to assist should an international agreement allow Russia to take control of the tons of chemical weapons believed to be in the stockpiles of President Bashar al-Assad.

“I’m not going to speculate on who may or may not be participating in a process that may or may not take place,” Little said. “We’ve got to see where the process goes” before the U.S. military considers involvement, he said.

Syria has tentatively agreed to the Russian initiative and also agreed to join the international ban on chemical and biological weapons.

Lavrov has urged the U.S. to speed the negotiations by dropping the threat to launch strikes on Syria, but Little said “the threat of military action is driving the process forward.”

To back up the threat, the U.S. was keeping four destroyers off the Syrian coast and the Nimitz carrier strike group in the Red Sea, though some of the ships may be replaced if the negotiations are drawn out, Little said.

“We have a mix of assets that would be available” to back up the threat, Little said. He wouldn’t comment on whether submarines were also in the Mediterranean to join with the surface ships in launching Tomahawk Land Attack Missiles. Little stressed that “we remain fully prepared to act” in the event that the talks with the Russians fail.

Any strike on Syria would also likely include B-52 bombers and possibly B-2 Spirit bombers firing cruise missiles from “stand-off” positions beyond the range of Syrian air defenses.

Syria is not helping either by poking the British badger:

Little declined comment on whether Hammond and Hagel discussed the possible use by the U.S. of the British airbase at Akrotiri on Cyprus, which is about 160 miles from the Syrian coast.

Last Sunday, the British Ministry of Defense confirmed that Typhoon interceptors had scrambled from Akrotiri to confront Syrian fighters that had flown into international air space near Cyrpus.

The Syrian planes were believed to have been two Russian-made Sukhoi Su-24 attack aircraft that were flying “low and fast,” the Daily Mail newspaper reported.

Before the stunning Aug. 30 vote by the British parliament against the use of force in Syria, Britain had sent six Typhoons to Akrotiri.

Obama is still canoodling with Kuwait, Qatar and Saudi Arabia — sending money and arms to the Rebels to dethrone Assad. Nothing has changed — the disposal of chemical weapons is a ruse. They have already mostly been moved thanks to forewarning by Obama. I hear they are in over 50 different locations now. American boots are on shifting Syrian sand, that is about to become Middle Eastern quicksand.

One thought on “Boots on Shifting Syrian Sand”