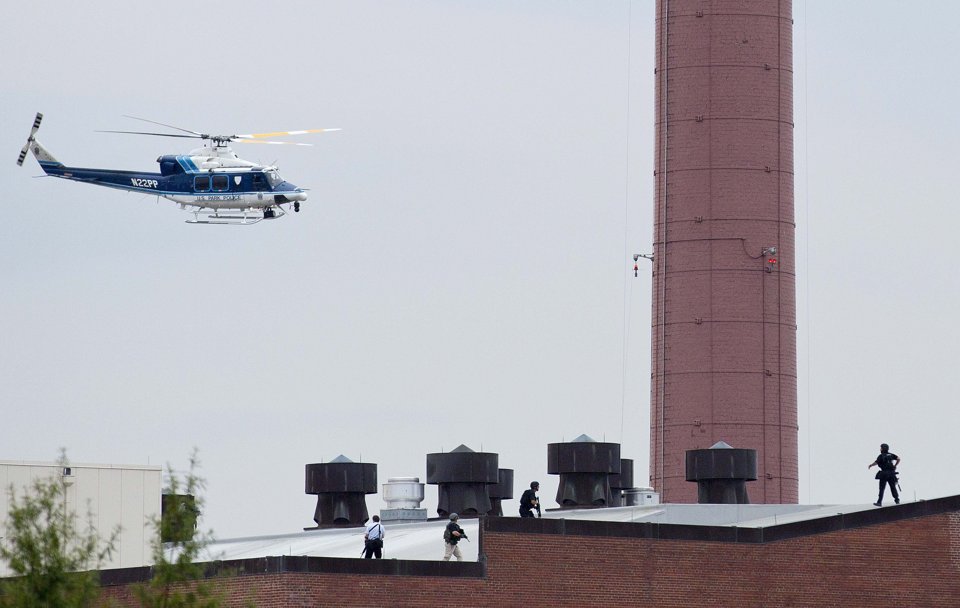 Multiple reports are coming in over the wires… 2 gunmen are being hunted by Police who are searching for active shooters on the grounds of the Washington Navy Yard in Southeast D.C. One of the shooters is in fatigues.

Hundreds of police and SWAT have descended on the Naval Yard. Flights have been halted out of Reagan as well. 2 officers are among the confirmed dead. There are several who are wounded as well. 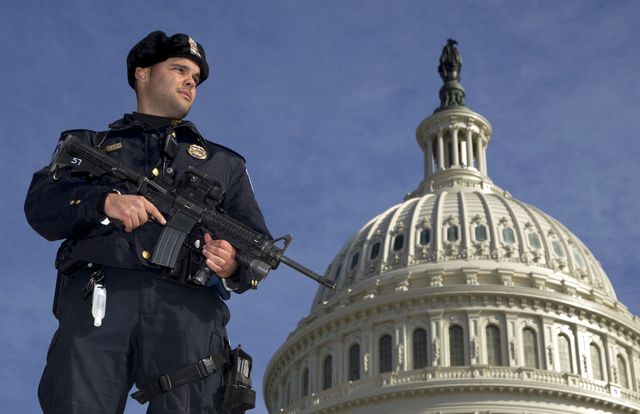 Capitol Police officer Angel Morales stands on guard Feb. 17, 2012, on the west side of the U.S. Capitol in Washington, after a 29-year-old Moroccan man was arrested in an FBI sting operation near the Capitol while planning to detonate what police say he thought were live explosives. (Associated Press)

4 killed, 8 injured in a shooting at Washington Navy Yard; at least 2 shooters involved:

#BREAKING: 4 killed and 8 injured. One shooter down #NavyYardShooting #Navy #CNICHQ

Multiple media reports said at least two attackers were involved in the rampage, and officials remain on the hunt for additional “active” shooters.

Navy officials had reported three shots were fired at 8:20 a.m. at the headquarters of the Naval Sea Systems Command in Southeast Washington.

Two of the shooting victims are D.C. police officers.

The identity of the shooter is still unknown, Navy officials said.

The Navy has issued a shelter-in-place order for personnel.

The 11th Street Bridge has been shut down, and people should stay away from the area, the police spokesman said. Flights departing from Ronald Reagan Washington National Airport have being been stopped, the FAA says, and incoming flights are being held at their origin.

Also, people in the neighborhood around Fort Myer could hear a “shelter in place” order being issued over the loudspeakers about the time of the shooting.

About 3,000 people work at the headquarters of the Sea Systems Command, which is responsible for engineering, building, buying and maintaining ships, submarines and combat systems for the Navy.

The Washington Navy Yard is an administrative center for the Navy, housing the headquarters for several commands including Commander, Naval Installations Command, and Naval Sea Systems Command, which is located in Building 197 and is responsible for procurement and maintenance on the Navy’s fleet of ships and submarines.

NBC: At least 2 cops among victims…
Flights halted out of Reagan airport…
WH: ‘Citizens: Listen to the Authorities’…

1 shooter ‘contained,’ not in custody

Described as bald black man dressed in all black

‘Shooting From 4th Floor Overlook, Aiming At People In Cafeteria’

Police say as many as 3 shooters have killed at least 4, injured 8 on grounds of Washington Navy Yard

At least 7 dead in shooting at Navy Yard, officials say

FLASH: DC POLICE CHIEF SAYS 2 OTHER SHOOTERS MAY BE AT LARGE

UPDATE: One suspect cleared, other potential shooter still on loose