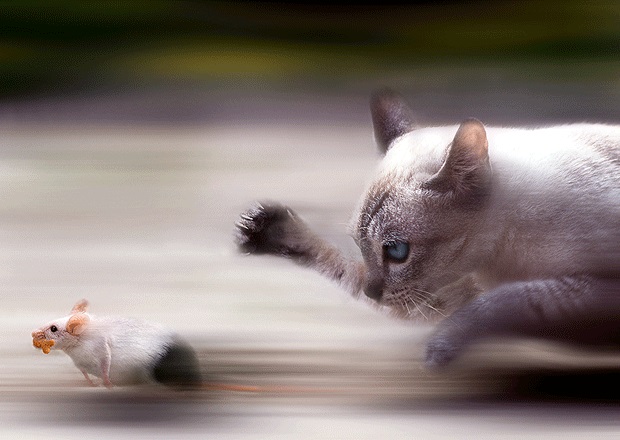 What do cats and legal gun owners have in common? Both are a solution to the problems of rodents – in one form or another.

I’ve written numerous columns illustrating the staggering lack of logic and reason within the gun control movement among liberals at large, in the media and within the Democrat party. I found it necessary to return to the topic, because I just got a super-sized example of the impaired judgment and intellectual dishonesty of gunophobes handed to me on a Silver platter by the Governor of Illinois, Pat Quinn. Gov. Pat Quinn says he would consider using state resources to help combat Chicago street violence, but only if city officials want the assistance.

What sort of ‘state resources’ does Pat Quinn contemplate mobilizing? Community organizers? No. What then? The State Police and or the Illinois National Guard. Before I tie the threads together on this in a moment, let’s briefly review the statistics, along with the latest event that brings the Governor to the stage of considering such a move. According to Reuters, Chicago has one of the worst homicide rates in the country and more violent crime than other large cities such as New York and Los Angeles. The city’s police department had been claiming success in stemming the violence with a strategy of flooding 20 high-crime neighborhoods with officers. Homicides in Chicago this year are down 21 percent compared with last year – at 305 compared with 389, according to the Chicago Police Department.

Whenever the topic of ‘gun violence’ is raised by progressives, it is usually in the context of the claim that there are ‘too many guns in this country’ and the simplistic answer is that more restrictions of the availability, access and ownership of guns is the remedy. But what is the precise nature of most of the ‘gun violence’ that liberals cite? Well, Chicago is as good an example of reality as separated from fiction as it gets. Chicago’s gun violence is predominantly gang violence. “If you remove gang-related incidents from the Chicago homicide statistics, the homicide rate involving normal citizens is much lower,” says James Alan Fox, a criminologist at Northeastern University in Boston.

But progressives are not interested in stepping up enforcement against the very element that is predominantly involved in the violence – gun related or otherwise. They are obsessed with the particular weapons involved in the violence, as if the gang members are merely incidental to the mayhem. As an example, consider this typical narrative from the New York Times, of the origin of Chicago’s problems:

More than a quarter of the firearms seized on the streets here by the Chicago Police Department over the past five years were bought just outside city limits in Cook County suburbs, according to an analysis by the University of Chicago Crime Lab. Others came from stores around Illinois and from other states, like Indiana, less than an hour’s drive away. Since 2008, more than 1,300 of the confiscated guns, the analysis showed, were bought from just one store, Chuck’s Gun Shop in Riverdale, Ill., within a few miles of Chicago’s city limits.

So if Chuck’s Gun Shop and his customers could just be outlawed by legislation, the gang problem in Chicago would be solved. That is the implication at hand here. But perhaps only 20 percent of the weapons traced to street violence in Chicago are accountable to Chuck’s Gun Shop. The Chicago police traced the origins of more than half of the guns seized since 2001 and found that the guns whose origins were identified came from all 50 states and from more than 60% of the nation’s counties.

The false equivalency of the outlawing of legal sales of firearms would infer that vigorously curtailing gun purchases nationwide, would be the solution to Chicago’s problems. But would it? Not if the majority of the violence is perpetrated by gangs. Keep in mind that the only people who are under scrutiny of the strict gun laws in Chicago are those who wish to own a firearm for self protection. They wouldn’t be responsible for the violence statistics. A good example of this is Houston, Texas. Here are some revealing facts about the two cities, Chicago and Houston:

Chicago – no outlets within city limits according to ordinance
Houston – approximately 1,500 retail venues

No statistics are available for rate of gun ownership in Chicago or Illinois, but we could get an idea by comparing Texas and Illinois’ neighbor, Michigan (for which stats are available). Texas and Michigan have an equal number of violent crimes per 100,000 residents, but Texas has double – 8.1%, the number of homes with a pistol or revolver readily available for a contingency.

You really need to get back to the substantive issue, however, and that is gang activity. This is where we discover the main solution to the ‘gun problem’ of the progressives. The Christian Science Monitor reports:

Chicago is in the midst of its worst period of gun violence in years. Its 513 homicides last year was a four-year high, and last month’s 42 homicides were the most in a January since 2002. Meanwhile, much larger New York had only 414 homicides in 2012 – an all-time low. If it had Chicago’s murder rate, New York would have totaled more than 1,400.

Why is New York’s homicide rate declining, despite all the drama queen antics of Nanny Mike Bloomberg? More effective gang enforcement in New York City, plain and simple. Both cities have restrictive gun laws, and both are subject to the challenge of weapons brought into the city from outside the state. But New York has ramped up its anti-gang program. The hiring of more officers and the concentrated enforcement in gang locales is considered by experts in anti-crime strategy as the game changer. Which means that Bloomberg’s and Rahm Emanuel’s heavy handed gun policies aimed at keeping guns out of the hands of residents that need and are entitled to own them, has nothing to do with the solution to gun crime. Controlling the criminal population does.

Before I get to the beautiful irony of Governor Quinn’s offer to the city of Chicago, allow me to submit an analogy. Recall the Black Plague or Black Death in 14th Century Europe. Millions died from being infected by fleas that carried the Yersinia pestis, a bacteria which epidemiologists suspect traveled in infected rats from China to Italy via Black Sea trading vessels in 1347. A major aggravating factor at this time was the prevailing sentiment towards cats in Europe. The Church fostered superstitious attitudes regarding cats, including that they were the embodiment of witches and associated with evil. For this reason, European society had largely eliminated it’s cat population, the natural preditorial adversary of rats and mice. Now infected rats carrying this disease had free reign to infect humans and the results were – pardon the expression – catastrophic. Things have changed since. The Royal Palace and the Prime Minister’s residence at 10 Downing Street employ cats to police rodents.

Progressives, who like to esteem themselves as rational and better educated than ‘bitter clingers’, exhibit the same degree of superstition and illogical phobia of guns in the hands of law abiding citizens as the medieval residents of Europe held towards cats. That’s what leads to Gun Free Zones and results in innocent people not being able to defend themselves against armed attackers such as in the Navy Yard shootings.

Now, to Governor Quinn. His offer to Chicago? Bring in more guns! That’s right, more guns in the hands of State Police and the Illinois National Guard. Of course, I can psychically predict the argument of a typical Democrat as to why guns in the hands of a Guardsman would be more effective and appropriate than the same guns in the hands of legal gun owners – competence in use. The fact remains, however that a gun used for deterrence of gun crimes by a homeowner does not require the sort of extensive combat proficiency as that of a State Police officer or reservist. But now we know that even a Democrat Governor of a large state, accepts the reality that guns are a tool in responding to gun wielding criminals.

Patrol Supt. Garry McCarthy, Chicago Police Department, remains in opposition to the proposal. “I said no way, no how.” Sounds like a pretty intelligent law enforcement professional. The residents of the ‘Back of the Yards’ district, that just had 13 deaths, due to gang violence, are not too certain of the Governor’s idea either. “We not in Iraq. They might be calling it “Chiraq”. We’re not in Iraq,” said Naphtali Dukes, Back of the Yards resident. Naphtali Dukes said his violence-wracked neighborhood needs jobs more than it needs state cops and soldiers. “Soldiers need to be where soldiers be at, the battlefield.”