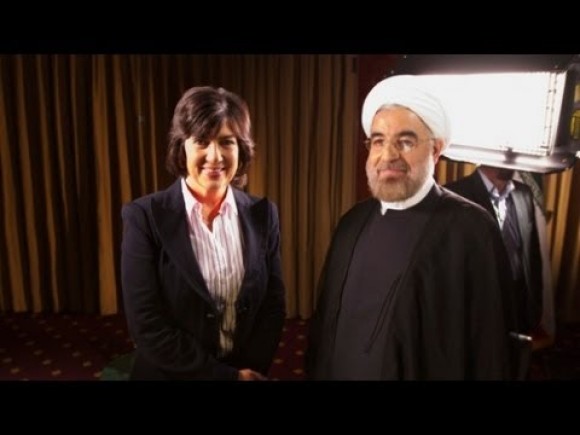 A controversy has emerged over what Iranian President Rouhani said or did not say during a CNN interview about the Holocaust, with Jonathan S. Tobin of Commentary believing a semi-official Iranian news agency account.

Did Rouhani denounce the Holocaust by name or not?

Tobin says, “The official organ of the Iranian government [Fars News Agency] provided an exact translation of what he said and matched it with what CNN broadcast and then published on their website. When the two are compared it is clear that the network expanded on what he said to help convey the impression that he was condemning Holocaust denial when it is clear that he did no such thing.”

Tobin adds, “…there is no doubt that the news outlet airbrushed Rouhani’s comments to the point where they are far more acceptable for a Western audience. The actual remarks make it clear that Rouhani is as much of an agnostic about the extent of the Holocaust as [former Iranian President Mahmoud] Ahmadinejad. After all, Rouhani’s predecessor never said that no Jews were killed but said it was vastly exaggerated, the false argument that all Holocaust deniers try to make.”

Tobin went on, “It is up to CNN to explain this attempt to falsify the content of the interview that goes beyond the usual discrepancies that often pop up in translations and crosses over into editorial malfeasance.”

The Washington Free Beacon said that CNN’s Christiane Amanpour, who conducted the interview, has “regularly praised Rouhani for his supposedly moderate positions,” providing a motive for altering the interview to make Rouhani look good.

Amanpour’s Iranian background and coverage of the country’s fanatical Islamic regime has caused many to think she has a bias.

In 2000, as we noted at the time, a group called the American-Iranian Council held a special event featuring Amanpour and a screening of her documentary, “Revolutionary Journey,” in which Amanpour returned to the country “to tell us about all the wonderful changes going on there.” The Arab-American Institute gave her an award earlier this year.

Blogger Ruth King writes, “We’ll leave it to CNN to account for its translation, and why it made Mr. Rouhani seem so much more conciliatory than he was. Meantime, points for honesty go to the journalists at Fars, who for reasons that probably range from solidarity to self-preservation, aren’t disposed to whitewash their President’s ideological predilections.”

These are serious charges. But are they true? Or did Fars have its own motivation for distorting the comments?

“I have said before that I am not a historian personally and that when it comes to speaking of the dimensions of the Holocaust as such, it is the historians that should reflect on it. But in general, I can tell you that any crime or—that happens in history against humanity, including the crime that the Nazis committed towards the Jews, as well as non-Jewish people, is reprehensible and condemnable, as far as we are concerned.”

“Iran’s New President Condemns Holocaust as a Crime” is how The New York Times covered the interview.

The Fars News Agency claimed that CNN “fabricated” that part of the interview. It stated flatly, “American news channel CNN fabricated the remarks made by Iranian President Hassan Rouhani in response to the network’s question about the Holocaust.”

Fars says Rouhani never mentioned the word “holocaust.” It says the exact English translation of Rouhani’s remarks is as follows:

“I have said before that I am not a historian and historians should specify, state and explain the aspects of historical events, but generally we fully condemn any kind of crime committed against humanity throughout the history, including the crime committed by the Nazis both against the Jews and non-Jews, the same way that if today any crime is committed against any nation or any religion or any people or any belief, we condemn that crime and genocide. Therefore, what the Nazis did is condemned, (but) the aspects that you talk about, clarification of these aspects is a duty of the historians and researchers. I am not a history scholar.”

A subsequent New York Times story noted that the translation of the interview by the Fars News Agency “resembles more closely the way Mr. Ahmadinejad used to discuss the issue.”

CNN has now posted the transcript, video and audio of the interview.

But the handling of the interview and its coverage by CNN did raise questions.

Note that the second story does not explicitly claim he mentioned the word “holocaust.”

David Harris, the executive director of the American Jewish Committee, told the Times, “Assuming the accuracy of the translation, for me his comments are duly noted. But he’s only acknowledging, and rather belatedly, the universally acknowledged truth of the last 70 years. That does not warrant a standing ovation.”

His point about “assuming the accuracy of the translation” is important. It reflects the continuing questions about whether the interview was manipulated to serve a certain purpose. But manipulated by whom? Today’s Wall Street Journal, in an editorial, says: “Our independent translation of Mr. Rouhani’s comments confirms that Fars, not CNN, got the Farsi right.”

In the end, perhaps CNN and Fars have each done a fair amount of manipulation. It is ironic that Fars is believed by some to have more credibility than CNN.