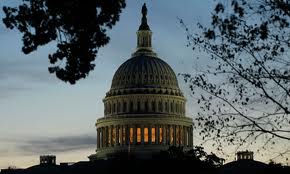 Here it comes… the next move in the DC two step:

House Republicans will vote to pass a one-year delay of Obamacare in exchange for funding the government, a plan that drastically increases the chances of a government shutdown this Tuesday.

The decision was announced by the GOP leadership in a closed meeting Saturday afternoon, according to sources present. Republicans will also pass a separate bill to fund U.S. troops if the government shuts down, GOP lawmakers said. The House’s funding measure will keep the government open until mid-December.

Additionally, Republicans will adopt a “conscience clause” that delays until 2015 an Obamacare requirement that employers cover birth control as part of their health-insurance packages.

The move puts Senate Democrats and the White House at loggerheads with House Republicans, a standoff that could lead to the first government shutdown since 1995.

Although Cantor and other Republicans claim to have had enough of the disunity and infighting within the GOP ranks (they are still trying to contain Ted Cruz and the Tea Party and put us in our place), Americans have watched this political sausage being made and won’t forget. We won’t forget as these Progressive Republicans tried to butter their bread on both sides of the aisle. There will be no going home with the American voter after this party. Brace yourself for one very ugly political hangover.

“We’ve had enough of the disunity in our party,” Majority Leader Eric Cantor (R-Va.) told the meeting of House Republicans Saturday afternoon. “The headlines are Republicans fighting Republicans. This will unite us. This protects the people who sent us here from Obamacare.”

House Majority Whip Kevin McCarthy (R-Calif.) said it would be the “fastest whip check in history,” as every member raised their hand, saying they would support the bill.

I say, shut. it. down. Shut it all down. You screwed us on Obamacare and a myriad of other issues. Shut it down or America will shut you down. 2014 and 2016 cometh – time to clean the political chambers of Progressives. Stop the insane spending and the destruction of America with the help of those we sent to Washington to protect our interests. A Tea Party coalition is forming and a political earthquake is coming.