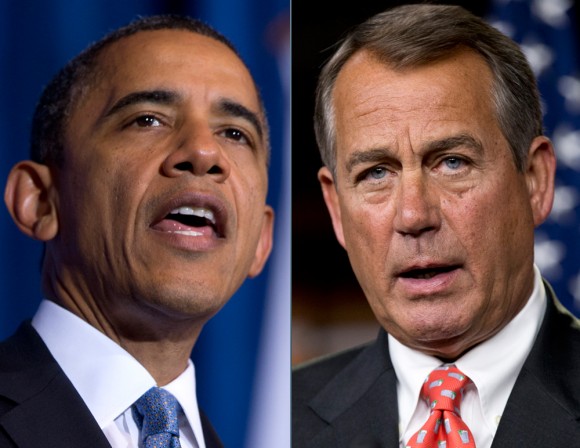 The Democrats and their allies in the media are celebrating a successfully ended partial government shutdown, one where few to no concessions were required of President Obama. Meanwhile, Obamacare remains intact, despite the fact that private-sector estimates show that less than 1%—a total of 36,000 people so far—of those entering the registration area of Healthcare.gov actually enrolled. But should Democrats really be celebrating? After all, they fought for the right to own Obamacare, with all its flaws, and more national debt with no new spending restraints.

The bill to end the shutdown, signed by President Obama, contains considerable pork barrel spending. It includes funds to fix roads in flooded Colorado, increased authorization for spending on construction on the lower Ohio River in Illinois and Kentucky, and “a one-time payment to the widow of Sen. Frank Lautenberg (D-NJ), who died over the summer,” according to The Hill. It also includes “extra money to help the Veterans Affairs Department whittle down a backlog of disabilities claims,” according to an Associated Press article, which cited a list of other examples of pork that were included. With the administration’s record on handling veterans’ disability claims, it’s hard to argue with that particular item.

“A draft of the bill began circulating in the early evening, and a final version was released by Senate Democratic staff just before 6 p.m.” on Wednesday, reported The Hill. The final vote in the Senate that night was 81-18, and in the House, 285-144, thus ending the drama—at least for the time being.

Indeed, if NBC News is to be believed, a beleaguered Speaker of the House John Boehner will have his leadership questioned after this saga. In their piece, “GOP takes biggest hits from Washington standoff,” they argue that their flawed NBC/Wall Street Journal poll shows “The standoff has nicked every Washington politician to some extent but it’s Republican leaders and the Tea Party who took the biggest hits.” NBC’s Savannah Guthrie called the results of the NBC-Wall Street Journal poll “absolutely devastating to Republicans.”

There’s just one or two catches. First, as Bryan Preston of PJ Media pointed out, the poll grossly oversampled those with a connection to government, with 20% of respondents connected to government instead of the 8% nationwide average. In the question, “Do you or an immediate family member living with you work for the federal government or a state or local government?” 20% of those polled answered “Yes.”

After all, in a government shutdown poll, that doubling is going to make quite difference. Imagine if your wife or husband were furloughed, not to mention yourself. Wouldn’t that affect your opinion?

In addition, in weighting the poll even more than usual, 43% of the respondents self-identified as Democrats, and only 32% as Republicans, with 19% claiming to be “strictly Independent.”

And according to the liberal Huffington Post writers Mark Blumenthal and Emily Swanson, the question of “who is to blame” for the shutdown may “be the least reliable gauge of public opinion about the ongoing crisis.” The recent HuffPost/YouGov poll, allowed respondents to “‘check all that apply’ from a list of three choices: President Barack Obama, Republicans in Congress, and Democrats in Congress.”

“Initially, slightly more checked only Republicans (38 percent) than checked only Obama, only Democrats or both (34 percent),” they wrote. “After a follow-up probed further for the most responsible party, Americans split evenly (43 percent each) on whether Republicans or Democrats were to blame” (emphasis added). In other words, The Huffington Post found the American people divided over whom to blame for the shutdown. That’s after the biased media coverage in favor of Obama’s shenanigans and the media’s focus on Republican stonewalling by not pushing forward a budget deal.

“In the HuffPost/YouGov poll, 62 percent disapproved of Republicans in Congress, while 54 percent disapproved of Democrats in Congress and 53 percent said the same of Obama,” report Blumenthal and Swanson. While pundits are talking about how unpopular the Republican brand is, it should be remembered that in 2010, when Democrats still controlled both houses of Congress, and had passed Obamacare earlier in the year, Gallup showed Congress’s approval rating at 13%, at the time, “the worst Gallup has measured in more than 30 years of tracking congressional job performance.” And that was when there was no gridlock. The Democrats had the run of the place.

But the biggest damage is to Speaker Boehner, according to NBC, which pronounces: “Boehner emerges from the ordeal mostly as he went in: his leadership hobbled and his credibility tarnished in the eyes of congressional Democrats and Obama. He refused to seek Democratic support for legislation to avoid or end the government shutdown and raise the debt ceiling, instead choosing conservative proposals that prolonged the stalemate. While House conservatives show no signs of overthrowing their beleaguered speaker, Boehner’s ability to cut a deal and deliver Republican votes will be questioned for however long he hangs onto his gavel.”

What about Democrat stonewalling? And what about President Obama’s refusal to bargain? These are missing from NBC’s false narrative, which hangs all the blame around the Speaker’s and Congressional Republicans’ necks.

It is not for nothing that the New York Post reported on October 15 that close Obama advisor Valerie Jarrett is known as the “architect” of the shutdown. “It was Jarrett who advised Obama that voters would mostly blame Republicans if the federal government ground to a halt, providing a golden opportunity to swing back control of the House to Democrats in the 2014 mid-term elections, according to [author Ed] Klein,” reports the Post.

What if the Republicans gain seats in the 2014 elections? What message will that send?

“She convinced the president that a government shutdown and default offered a great opportunity to demonize the Republicans and help the Democrats win back a majority in the House of Representatives in 2014,” said Klein, according to the Post.

As I pointed out in a previous column, The Wall Street Journal quoted a senior administration official as saying, “‘We are winning…It doesn’t really matter to us’ how long the shutdown lasts ‘because what matters is the end result.’” This is hardly a conciliatory story from the side of Democrats; Senator Harry Reid shot down a number of bills from Republican House Members, bills that would have funded parts of the government during the shutdown. The President insisted on a “clean” bill before he would do any bargaining. And remember, the shutdown amounted to 17% of the federal government.

The end result, according to the liberal echo-chamber, is that Democrats won, and Republicans lost.

That does seem to be the case, given that the only concession Republicans reportedly received is that, according to The Hill, the law “including new rules for verifying household income to determine eligibility for subsidies to buy health insurance under ObamaCare…specifically requires the government to ‘certify to the Congress that the Exchanges verify such eligibility.’” But The Los Angeles Times reports that even that is an illusion, as the law’s actual deal on “income verification,” is that it “requires only that the secretary of Health and Human Services report to Congress by January 1, 2014 on the ‘procedures’ in place to verify eligibility for the subsidies, and by next July 1 report on their effectiveness.” And worse than that is the fact that the debt-ceiling hike is for a date, February 7th, not an amount that limits borrowing to a specific dollar amount. Instead, according to The Daily Caller, it just temporarily suspends enforcement of it until February 7th.

But this may turn out to be a short-term political victory. Again, it showed how uncompromising Obama was, that he led the world to believe he might default on our debts, and then cherry-picked items to shut down based on what he believed would cause the public the most pain. And of course he knew he could count on the media to embrace his narrative—that it was the Republicans who not only caused, but wanted the shutdown. In an article in Politico, titled “Anatomy of a Shutdown,” they cited Sen. Majority Leader Harry Reid (D-NV) as urging President Obama to not negotiate. “Reid nixed an idea in mid-September to invite the congressional leaders over to the White House for a talk. It sends the wrong message, Reid argued to Obama in a call. We shouldn’t even create the appearance of a negotiation.”

As argued before, default was never an option—and shouldn’t have been on the table, if Obama had been interested in furthering confidence in the markets. He could have guaranteed that the Treasury would have used its available cash to pay bondholders, regardless of the failure to extend the debt ceiling limit. But then, again, I guess I must be what Paul Krugman has been calling a “default denier.”

The big questions remain unanswered. Has Obama so burned the bridge with House Republicans, that he is effectively a lame duck? Is Obamacare such a “train wreck” and job destroying program that it will weigh so heavily for Democrats in the 2014 elections that Republicans gain seats in the House and take control of the Senate? Stay tuned.

One thought on “While Media Celebrate End of Shutdown, Hangover Sets In”