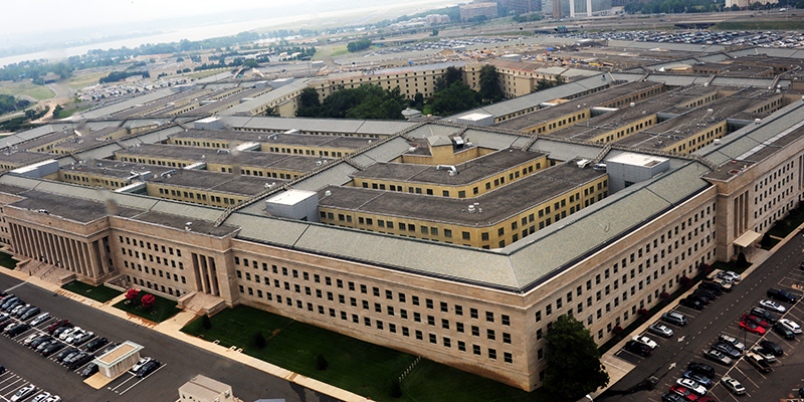 2014′s iteration of the National Defense Authorization Act is approaching a vote in the Senate. Typical of the process of crafting a bill that involves such an enormous segment of the nation’s budget, is the perennial attempt by interest groups to insert amendments that often have zero to do with the target of the appropriations at hand.

Reports are surfacing that Senators will try to introduce amendments falling completely outside the scope of defense related expenditures. Capitol Thinking reports that Health, Education, Labor and Pensions Chair Tom Harkin (D-IA) has indicated he may attempt to add a provision to the NDAA to raise the minimum wage – a Democratic Party priority. While I have sympathy towards the struggles of people working at minimum wage pay, I think not only is the timing wrong in a jobless recovery, but that the best way to address depressed wages and the income gap, is to enforce immigration law aggressively and to disincentive the financialization of our economy by re-introducing the Glass – Steagall Act. Stimulate the productive side of the economy and the legal citizen labor force will share in the benefits.

Another very disturbing prospect is the likely attempt to revisit the so called ‘Marketplace Fairness Act‘. Senators Dick Durbin, an Illinois Democrat, Mike Enzi, a Wyoming Republican, and Lamar Alexander (R-Tenn), proposed a version of the Marketplace Fairness Act as an amendment to the 2013 NDAA, but were not successful because critics argued that including it would have muddied the waters and delayed a final vote on the NDAA. FreedomWorks is sounding the alert that the same elements are going to take another run at it this year.

There are a lot of reasons that this new tax scheme – requiring eCommerce businesses to collect sales tax in states they generate sales in other than their own, is a bad idea, but let’s just hit the three most significant ones. This is a tax hike on the American consumer. Americans are already paying the ‘inflation tax’ caused by the weakening of the dollar that results from the Fed inflating the currency via Quantitative Easing (QE). Somebody said and somebody else quoted the person who said, “you don’t raise taxes in a recession”. Yes, that was Barack Obama in August 2009. Folks, we are not in a recovery, we’re still in a recession, no matter what the liars in the Obama Industrial Media Complex tell you.

Second, if you like big government and want more of it, by all means allow them to siphon more money out of the productive economy. If you think big government is wasteful and abusive – oppose any new taxes and insist on downsizing. Why is government immune from downsizing? Private industry is not.

My third objection is that of the small business owner. The economic meltdown of 2007, has severely impacted Main Street Americans and has caused them to resort to the internet’s dynamic commerce resources to sustain family income. Desperation launched thousands of everyday wage earners who were pushed out of the workforce – into marketplaces like eBay, where you can sell personal belongings or become a retailer of new merchandise. I’m one of them. Ebay, for all its faults, from a seller’s point of view, is nonetheless, at the transaction level, the closest thing you can get to genuine free enterprise capitalism in our economy today.

What concerns me about this misnamed ‘Marketplace Fairness Act’ is that the authors of this legislation reasoned that smaller sellers would not actively oppose it if a taxation threshold of $1 million was adopted. Anyone paying attention to how Washington D.C. operates knows that such a provision is nothing less than the Camel’s nose under the tent. They’ll start in on the larger volume sellers and come back for the rest of us later. If you doubt this, I’ll let you in on a poorly guarded secret. Policy makers in Washington have actually redefined ‘the wealthy’ as families making $200,000 per year, (of course they don’t talk about this publicly). Those are mostly paper assets of small business owners struggling to make it in this economy. But that’s where the money is, in the eyes of these vultures. They talk about “helping the Middle Class”, but what that means is they want to strip them naked.

Finally, the CBO (Congressional Budget Office) tallies the current Senate NDAA bill at $545 billion in base defense spending (not including OCO – Overseas Contingency Operations – the new euphemism for the verboten term ‘War On Terror’), whereas the sequester levels would be $498.1 billion. It’s regrettable that Congress couldn’t behave like adults and do the right thing about reducing spending in an organized, analytical and deliberative fashion – but they didn’t, so we had sequestration, or as Maxine Waters terms it “Sea-Castration”.

I’m a vigorous proponent of strong national defense, but not Global Power Projection and military adventurism – essentially using our military assets as mercenary forces fulfilling the dictates of multi-national corporations. And honestly speaking, the Pentagon budget is bloated with waste, fraud and redundant systems that could easily sustain a cut of $50 to $100 billion dollars and not affect troop preparedness or support. Defense spending has increased a whopping 81%, since 2001! The United States spends more and a larger percentage of GDP than the rest of the world’s major military powers combined – as this chart demonstrates: 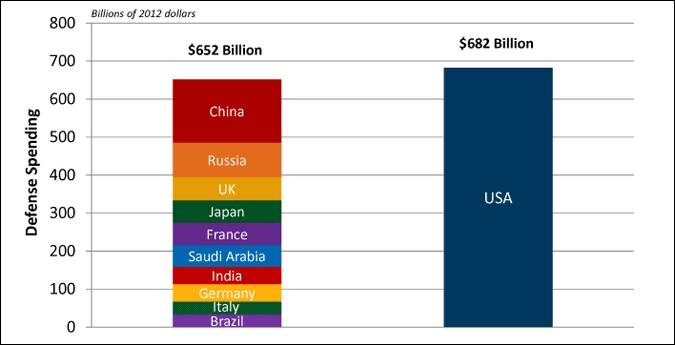 What goes up can and must come down. Reinforcing this fact, the Guardian reports that:

the US Government Accountability Office (GAO) – the independent, non-partisan “congressional watchdog” that investigates how the federal government spends taxpayer dollars – was unable to audit the department of defense or the department of homeland security. The majority of the 24 other agencies were auditable, but neither defense nor homeland security were among them.

The departments tasked with tracking specific threats to America can’t even keep tabs on how many hundreds of billions of taxpayer dollars are spent either stateside or in war zones, the latter of which the special inspector general for Afghanistan reconstruction (Sigar) has illuminated for years. Corruption, kickback schemes, bribery, conspiracy, fraud, waste, and abuse – measured in millions of dollars – are quite common among US military ranks, from Kabul to Kirkuk.

The Senate will go back to conference with the House, who has already passed their version of the NDAA for 2014. Senate Armed Services Committee (SASC) Chair Carl Levin (D-MI) has stated that “We’ve got to keep the amendments relevant to the defense bill.”

I agree. Let your Senators and Congress members know that new taxes and excessive spending as usual are not the path forward for accountable government. Remind them also that a defense spending bill is not the place for unrelated special interest wish lists.