Perhaps a “disaster” is an even better description of what is going on in the world.

I feel the impulse to apologize for not posting sooner at this critical time. But I know that is silly, as I’ve been working hard for Israel. Just know, dear readers, that you are not far out of my mind, even as I consult on Levy Report matters. With the help of Heaven, good things will come from that work…

But now, in light of the deal struck last night between P5 + 1 with Iran, how could I fail to do at least a short posting??

We shouldn’t have been surprised — not even after the fine words by French President Hollande as to how he was going to stand strong against Iran. And yet, until the end, there was hope, however faint, that the negotiations in Geneva would fall apart.

What evidence do we need of the error of the current deal with Iran other than what has now been said by the Iranian president: According to Iranian Press TV, Rouhani had declared that, “the deal reached with six world powers in Geneva ‘recognized Iran’s nuclear rights’ by allowing it to continue to enrich uranium and that Tehran’s enrichment activities would proceed similar to before.”

Yes, disaster is a good word. There is not such thing as “nuclear rights.” Obama and company have willfully given away the store.

And here we can see how eagerly, how thoroughly, Obama gave the store away (emphasis added):

“The United States and Iran secretly engaged in a series of high-level, face-to-face talks over the past year, in a high-stakes diplomatic gamble by the Obama administration that paved the way for the historic deal sealed early Sunday in Geneva aimed at slowing Tehran’s nuclear program, The Associated Press has learned.

“The discussions were kept hidden even from America’s closest friends, including its negotiating partners and Israel, until two months ago, and that may explain how the nuclear accord appeared to come together so quickly after years of stalemate and fierce hostility between Iran and the West.

“But the secrecy of the talks may also explain some of the tensions between the U.S. and France, which earlier this month balked at a proposed deal, and with Israel, which is furious about the agreement and has angrily denounced the diplomatic outreach to Tehran.

“U.S. President Barack Obama personally authorized the talks as part of his effort — promised in his first inaugural address — to reach out to a country the State Department designates as the world’s most active state sponsor of terrorism.

“The talks were held in the Middle Eastern nation of Oman and elsewhere with only a tight circle of people in the know, the AP learned. Since March, Deputy Secretary of State William Burns and Jake Sullivan, Vice President Joe Biden’s top foreign policy adviser, have met at least five times with Iranian officials.

“The last four clandestine meetings, held since Iran’s reform-minded President Hasan Rouhani was inaugurated in August, produced much of the agreement later formally hammered out in negotiations in Geneva among the United States, Britain, France, Russia, China, Germany and Iran, said three senior administration officials. All spoke only on condition of anonymity because they were not authorized to discuss by name the highly sensitive diplomatic effort.”

I might ask which side the man in the White House is working for, but it would be only a rhetorical question.

I have a friend in the US (who will recognize herself here), who just asked me: “Why are they not in the streets over this?” To her, what is being done is such a horror that nothing less than a major, very vociferous demonstration by the American people is called for. But she remains part of a sad (and grieving) minority. Are people asleep? (I’ve asked this before, I believe.) Do they really not grasp what it means if Iran gets the bomb? Are they so deluded that they imagine themselves safe, no matter what?

Maybe, incredibly, people believe the clown — yes, I know: a maliced clown, with a dishonorable history, my readers remind me — who heads the State Department.

According to AFP, Kerry said that “The comprehensive agreement [between the world powers and Iran] will make the world safer … and Israel safer.”

Of course, in the same statement Kerry also alluded to Prime Minister Netanyahu as “a friend of mine,” which would be uproariously funny if it weren’t so serious. You see where Kerry is going with this, attempting to smooth over Israeli objections to what he did. But it won’t work.

Netanyahu, at the weekly Cabinet meeting this morning, said that the deal that was struck with Iran was an “historic mistake.”:

“For the first time, the world’s leading powers have agreed to uranium enrichment in Iran while ignoring the UN Security Council decisions that they themselves led. Sanctions that required many years to put in place contain the best chance for a peaceful solution. These sanctions have been given up in exchange for cosmetic Iranian concessions that can be cancelled in weeks.

If you open this link, you will find a video of Netanyahu making this statement, with English subtitles.

Then there was the statement by Naftali Bennett, head of Habayit Hayehudi and Economics Minister, who wrote on his FaceBook Page:

“We awoke this morning to a new reality. A reality in which a bad deal was signed with Iran. A very bad deal. This bad deal gives Iran exactly what it wanted: a significant easing of the sanctions while retaining the most significant parts of its nuclear program.”

“If a nuclear suitcase blows up five years from now in New York or Madrid, it will be because of the deal that was signed this morning.

“There is still a long campaign ahead of us. We will continue to act in every possible way.

“It is important that the world knows: Israel will not be committed to a deal that endangers its very existence.”

These comments came soon after he had made similar statements in an interview with Army Radio, declaring:

“Israel is not engaged by the Geneva accord. Iran is threatening Israel and Israel has the right to defend itself.” (Emphasis added here and above.) 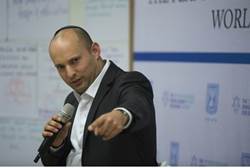 Actually, I’m going to backtrack even a bit more, and share a video of an interview of Bennett done last week with Christiane Amanpour on CNN. He was in the US lobbying against the UN agreement, and acquitted himself superbly in this interview — especially with regard to his standing up to Amanpour on the subject of Israeli “occupation.” But what you also get here is a clear explanation of the dangers of the Iranian deal.

Other members of the government reacted with horror to the agreement with Iran, as well.

MK Ruby Rivlin (Likud) observed that Kerry’s remarks about the deal having made Israel safer did not help: “The American attempt to reassure us just makes it more worrying.”

“You stand and shout out until you’re blue in the face, and you try to understand why they’re not listening. The world wanted an agreement.” (Emphasis added)

While Minister of Intelligence and International Relations Yuval Steinitz (Likud) said:
“The agreement was, and remains, a terrible deal that will make it harder to reach a suitable long-term solution.

“Israel cannot join the international celebration, which is based on Iran’s misleading and on self-delusion.

“Despite the disappointment we will continue to stick to our position and to work with our friends in the United States and around the world toward a comprehensive solution.”

But whatever Steinitz’s words about working with friends towards a comprehensive solution, I trust he is not holding his breath.

The working assumption here in Israel, where most people support Netanyahu’s position, is that ultimately we will, and must, hit Iran. This does not mean tomorrow, when Iran is watching and on guard. It means when our prime minister and his military advisers deem that the time is right.

There is no question but that our hitting Iran now is far more complex from a diplomatic perspective – for the world will accuse us of having intervened with war when the international community was on the brink of resolving everything peacefully. There are some analysts suggesting that Netanyahu might wait out the six months, until after the “interim” period that is supposed to be followed by a final deal but which is doomed to failure.

With a heavy heart I pray that Netanyahu will cry, “Damn the interim agreement,” follow his own counsel and act as he believes he must. I’m reading in some sources tonight that with all his condemnation, Netanyahu has held off from announcing he will attack (notice, for example, Steinitz’s statement about working with friends to strengthen the final deal). The implication here us that he does not intend to attack. But this is plain foolishness. If and when we do hit, there will be no advance notice.

Please understand that the “modest” reductions in sanctions that the Obama administration spoke of will amount to $7 billion in sanctions relief — not small potatoes — in return for a temporary limit by Iran in its nuclear program to low grade enrichment only and without the need for any destruction of equipment. Iran, that is, will retain breakout capacity.

What is more, “former Iranian Chamber of Commerce head Alinaqi Khamoushi was quoted in the semi-official Fars News agency saying the Obama administration had allowed Iran to access $8 billion of funds stored in the US.

“Washington froze billions of dollars in Iranian assets in the wake of the 1979 Islamic Revolution.”

As Defense Minister Moshe Ya’alon observed from Canada, where he was attending a conference:

“[the deal] allows Iran to enter the family [of] nations despite being the most active and flourishing activator of terrorism in the world, which sends its deadly and uncurbed deadly arms across the globe, first and foremost against Western states…

“To leave in the regime’s hands capabilities for continuing the nuclear program means that the world today is a less safe place. Instead of rolling the program back, the regime in Tehran has gained time, which will allow it on the one hand to seek a nuclear bomb, and on the other, breathing space due to the lightening of sanctions.” (Emphasis added)

If you want to know how thoroughly Obama intends to embrace Iran within the family of nations, consider this startling news tonight:

“Having overseen an interim deal with Iran on its nuclear program, the Obama administration now intends to try to involve Iran in wider Middle East diplomacy, including an attempt to find a solution to the Syrian civil war, Israeli television reported Sunday night.” (Emphasis added)

Iran, the biggest purveyor of terrorism in the world, involved in Middle East diplomacy. How do you wrap your head around this, or, better, around the reality that Obama apparently thinks this is a peachy keen idea??

Rogers: We Have Just Rewarded Very Bad And Dangerous Behavior