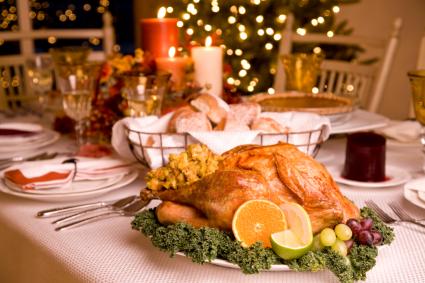 Isn’t this just lovely? Whatever you do, don’t discuss politics, in-laws, out-laws, religion, the Bears versus the Packers – and for Zeus’ sake, not a whisper about the retail workers screwed out of Thanksgiving! Mmmm-kayyy???

I realize that I’m going to establish for myself, a reputation as an iconoclast and a ‘Grinch that stole Thanksgiving’ – or at the very least the ‘Grinch that defended the theft of Thanksgiving’. I would be happy to settle for non-conformist and independent thinker, but let the critics do their worst. It has come to my attention that certain elements of the progressive side of politics and social perspective, find that retail businesses operating on Thanksgiving day, are violating a sacred precept of time off on that day. This is gaining a lot of attention and discussion on Facebook and other social media. There’s even a new term that has been coined to refer to it – ‘Black Thursday’. Among the notable retailers slated to open doors to customers on Black Thursday are Target, the Gap, Banana Republic, Wal-Mart, Sears, K-Mart, Toys ? Us, and Old Navy.

The backlash against sales on Thanksgiving are actually coming from two diverse avenues – leftists taking issue with corporate greed and social conservatives, who find Thanksgiving day shopping to be disrespectful of the tradition of families convening and reflecting on the providence of the Almighty. Either of these will feel their jaws tighten and the veins stick out on their necks when I’m through here – unless I win some converts to critical thinking. It could happen.

First is the backlash against Black Thursday from the store employees. There is a petition on Change.org that has been gathering impetus:

Employees of both Target and Wal-Mart have publicly criticized the Thanksgiving evening openings, and Change.org, a for-profit social change advocate, claims to have collected 350,000 signatures from people against Target’s opening on 9 p.m., including some who have said they were Target shareholders.

“Target can keep repeating the line about customers wanting to shop on Thanksgiving all it wants,” said Casey St. Clair, a Target employee who was quoted in a press release issued by Change.org. “The fact remains that 350,000 shoppers have signed my Change.org petition, and they’re all saying the same thing: Thanksgiving should be about family, not shopping. Black Friday is one thing; turning Thanksgiving from a family holiday into a consumer spectacle is another.” 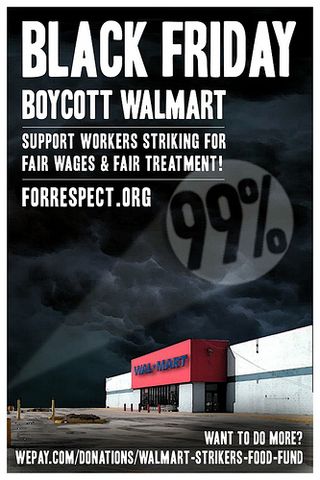 Actually, Black Friday is also in the crosshairs of the worker’s rights advocates – but this has more to do with their main and long time adversary, Wal-Mart, and the campaign by the organization ‘OUR Walmart‘ to organize its workers. The United Food and Commercial Workers union, who see disaffected Target and Wal-Mart employees as potential union members, are making sympathetic gestures. “Some [petitions] were started by family members who fear their loved ones — the employees — won’t make it home for Thanksgiving,” said Janna Pea, an official at the UFCW. Salon.com reports:

If Walmart doesn’t address OUR Walmart’s demands, said striking worker Colby Harris, from Dallas, “We will make sure that Black Friday is memorable for them.” He said that would includes strikes, leafleting to customers, and “flash mobs.” Harris was joined on a press call announcing the deadline by leaders of the National Consumers League, the National Organization of Women, and the Labor Council for Latin American Advancement, three of the national organizations that have pledged support for the workers’ efforts. Absent a resolution, said NOW President Terri O’Neill, NOW members will join Walmart workers outside stores on Black Friday to ask customers “whether they really want to spend their dollars on a company that treats workers this way.”

Better working conditions and pay and benefits – dandy, but am I the only one who sees a lot of hysteria mashed in with these Thanksgiving Yams? Conversely, I have to smile when I see people patting Sam’s Club on the back for not opening on these two days. Guess what? Sam’s Club is a subsidiary of WalMart! Sam’s Club is not having any ‘line ‘em around the building blow out specials’, so it makes no economic sense to open. That’s the ONLY reason they aren’t opening. And much as we all love Costco and they are nice and generous to their employees and a model for this, that and the other thing, yada yada – same deal – the financial metrics account for the hiatus, not warm, fuzzy sentiments.

There is, as well, a sentiment among social conservatives, that Thanksgiving sales are an affront to family values. Thanksgiving is viewed by many as a quasi-religious holiday, therefore, in their estimation, America is succumbing to secularism by profaning the Thanksgiving holiday in the pursuit of bargains and early Christmas shopping.

My conclusion on all this will certainly not satisfy any of the parties in this controversy. So be it. First of all, let’s examine the notion that store employees having to work on Thanksgiving is unfair. My question would be, compared to what? When I started thinking about all that goes on even when stores were closed on Thanksgiving, I jotted down an incomplete list of the jobs and people that do them, that don’t cease their work activity on Thanksgiving day:

What about all these? If you have a lifestyle that is any more involved than an Orthodox Jew or a member of the Amish or Mennonite communities, you are utilizing in some form or fashion, the labor of some individual who is not home celebrating Thanksgiving with their families, and they are not all retail workers. What is magic about the retail workers? Shouldn’t you be advocating that the entire spectrum of activity cease on Thanksgiving?

Now, concerning corporations and corporate greed. I’m not known to be sympathetic to the bad citizenship of Corporate America and I have reminded you that they not only don’t share your values, but in many cases are actually in opposition to them. But I’d like you to look at the retail worker situation from another angle. Americas’ major retailers are trying very hard to capitalize on the shrinking, irrational exuberance of consumer sentiment that still exists in this ongoing recession. If they don’t at least make a base hit on Black Thursday and Black Friday, the numbers are going to reflect it and they’ll lay off thousands of workers, which will have a ripple effect. It won’t be the CEO or his crony hires that get the Pink slip! Would layoffs be preferable to agreeing to work on what is, let’s face it, just another Thursday? 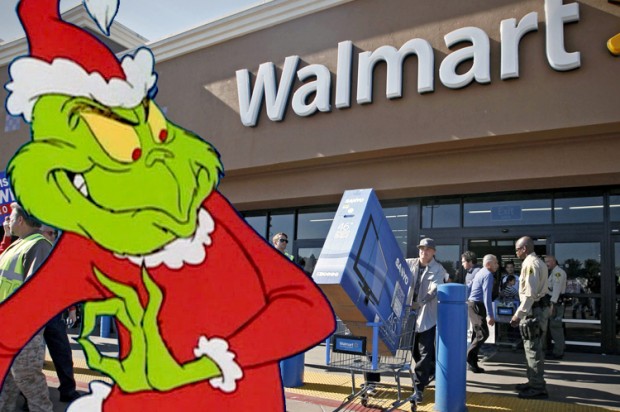 Cut me a big slice of break here, would you? Ah, another big flat panel TV out the door. Have fun until they pull the plug on freedom.

It’s ironic to me that disgruntled employees go to the “I’m missing Thanksgiving with family” card, when typically what we hear in so many conversations is how annoying family get togethers are at this time of year. It’s fodder for situation comedies. Don’t tell me otherwise. You know it, I know it and the American people know it. Look, I get it that corporations are stingy and centered on funneling profits to gluttonous CEO’s. But that’s the nature of the beast in a materialistic society such as the one we’ve become. Change yourself first and the institutions will follow (kicking and screaming the live long way).

Let’s be brutally honest. These Holidays aren’t really about religious traditions anymore. They are about partying and indulging in the passions of the flesh – in whatever form that might take. We saw individuals in the store check out lane with multiple carts piled with case after case of beer and liquor. I’m not a teetotaller – that’s not my point, nor am I in any position to judge, or care to be. But can we please own up that most people are not spending Thanksgiving Day on their knees beseeching the mercy and forbearance of the Almighty? Forget most – how about almost no one?

People instead, foolishly bury themselves deeper and deeper in debt – buying toys and ephemeral rubbish (for another historically and theologically inaccurate holiday), that they really can’t afford – which are manufactured offshore, thus demolishing our manufacturing base. Corporations stand ready to serve them in this headlong rush to the poorhouse. Realistically though, a lot of Americans haven’t had the hard truth driven home to them that retail work and fast food employment should not be approached as a career, but rather as transitional jobs on the way to skilled labor and professional pursuits, that you acquire more training than just your High School diploma to perform. I don’t mean to be harsh or mean, but if you plan to retire as ‘2nd lead Hamburger technician‘ or ‘associate manager of store inventory’, you are going to be a loser. Stop thinking like one.

As much as the pay for moderately skilled work sucks, the responsibility ultimately rests on the workers themselves to ensure upward mobility. No one except the tragic victims of human trafficking, are compelled to work with a gun to their head. We can exercise freedom of choice. It’s a bad economy, yes, but Free Enterprise is still hanging in on life support – try plugging into it before it flatlines. Find other like minded people who want to be entrepreneurs and pool your resources, fortunes and sacred honor. Hello? Never mind, just the Ghost of Steve Jobs checking in from the spirit world.

Here’s another problem that the so-called advocates of the working class, neglect to point out. Illegal and legal immigration devastate the wage structure in the United States more than any other factor except the offshoring of jobs. The rules of supply and demand will not be mocked. Too much supply of labor and wages plummet. Want to see wages increase for low skilled and entry level work? Oppose ‘Comprehensive Immigration Reform‘ and support the implementation of eVerify.

Have a Happy (and reflective) Thanksgiving or a wonderful Black Thursday – it’s up to you to decide which. Oh, and my gratitude to you folks working that day.

And So It Begins: New York Sending Out Gun Confiscation Notices