Hosts Carol Parisi and Jack Roeser will be joined by C Steven Tucker, a health insurance expert who has combed through Obamacare and shares with us his expert opinion of the effects of Obamacare, and how it will hurt the health industry, businesses, and America as a whole.
www.championnews.net 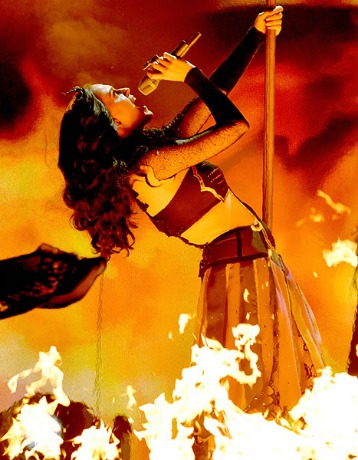 Family entertainment at its evilest, Katy Perry witches out for the Grammys.

A dark, dark trend is descending and behind it, you are sure to find the Marxists. Marx believed that religion should be done away with and that morality should be nixed. Marx viewed religion as “the opium of the people,” utilized and wielded by the ruling classes to provide a false hope for the working classes. He also saw it as a form of protest by the working classes against poverty. Marx thoroughly and utterly rejected religion.

Marxists believe that “old morality”—the morality of the reigning capitalist class—exploits the working class. According to this view, old religious moral codes must be abandoned. For Karl Marx and Frederick Engels “Thou shalt not steal” establishes a society in which some have property and some do not; such an establishment is the root of the problem.

So, you see… if it is best for the collective, the Marxists consider it moral.

Back to the Grammys. The Marxists thoroughly believe that if you give them the young, they will rule the world. The best way to get their hedonist message to the young is through music, video and television. As Perry bows to Baphomet on stage, with demons surrounding her and hell’s minions gyrating before her, you can see the call to the young to cast aside morality, religion — the bonds of goodness — to embrace an Obama-Marxist created society, where the world is theirs and they can do as they please, with no one to stop them. You see it in Beyonce’s skin tight, non-existent clothing as she pornographically performs on stage with her husband for the world to see.

Is it any wonder Christian gospel singer Natalie Grant walked out of the Grammys after watching demons cavorting and Satanism embraced by the icons of entertainment? Even E! Online tweeted on what appeared to be “witchcraft” occurring on stage:

Katy Perry even posited imagery of her being burned at the stake. One wonders if Perry actually realizes that the ‘dark horse’ is the third horse of the apocalypse. He is famine. 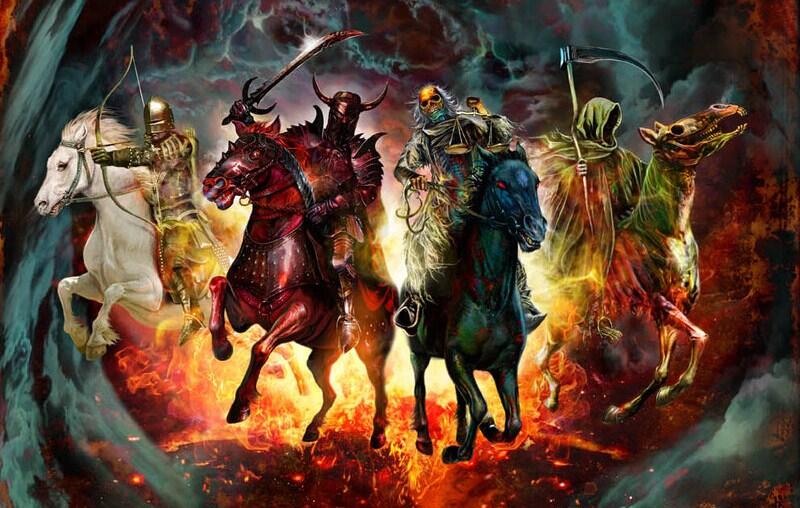 From Wikipedia comes the definition that the Occupy Movement would employ – it’s a Marxist dream come true:

The third horseman rides a black horse and is generally understood as Famine. The horseman carries a pair of balances or weighing scales, indicating the way that bread would have been weighed during a famine. The indicated price of grain is about ten times normal, with an entire day’s wages (a denarius) buying enough wheat for only one person, or enough of the less nutritious barley for three, so that workers would struggle to feed their families.

Of the four horsemen, the black horse and its rider are the only ones whose appearance is accompanied by a vocal pronunciation. John hears a voice, unidentified but coming from among the four living creatures, that speaks of the prices of wheat and barley, also saying “and see thou hurt not the oil and the wine”. This suggests that the black horse’s famine is to drive up the price of grain but leave oil and wine supplies unaffected (though out of reach of the ordinary worker). One explanation for this is that grain crops would have been more naturally susceptible to famine years or locust plagues than olive trees and grapevines, which root more deeply. The statement might also suggest a continuing abundance of luxuries for the wealthy while staples such as bread are scarce, though not totally depleted; such selective scarcity may result from injustice and the deliberate production of luxury crops for the wealthy over grain, as would have happened during the time Revelation was written. Alternatively, the preservation of oil and wine could symbolize the preservation of the Christian faithful, who used oil and wine in their sacraments.

Another possible interpretation of the third horseman is to interpret them as symbolic of the wealthy and the destructive power of a class gap on a society. This can be supported by the colour of their horse, black, which was seen as the sign of the wealthy as they were the only ones able to afford black dye. Also, the luxury goods issue supports this perspective as does the grain (symbolic of the staples of the working class) price increase. Such price increases would only be possible if the wealthy landowners and merchants wanted to keep the poor oppressed and starving.

Katy Perry’s parents were evangelists. She started her career as a gospel singer, if you can believe it. In December of 2013, she renounced her Christianity. It would seem her spiritual journey has taken a walk on the dark side.

But Perry was far from alone. Madonna witched out as well. And if you didn’t know you were at the Grammys, you might have thought you had stumbled into the mouth of hell. 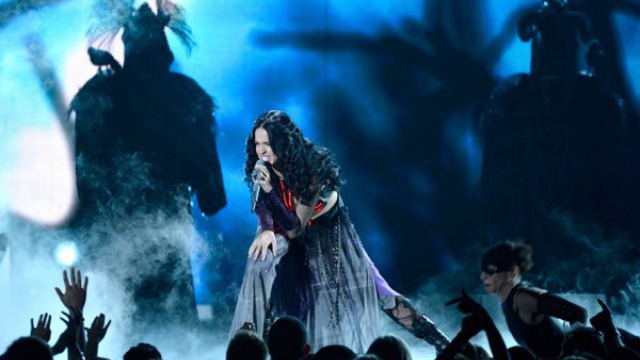 Modern day America is becoming eerily reminiscent of the Weimar Republic and its decadence. All these evil individuals by the way, are supporters and sycophants of Obama’s. I am not surprised. They pay homage to the one who brings misery and they celebrate wickedness. The devil’s in the Marxism.

The book profiles fourteen Senators and more than fifty Representatives and their ties to the Communist Party USA, Democratic Socialists of America, the Workers World Party and The Institute for Policy Studies, Council for a Livable World and other radical anti-American organizations. Trevor has done the hard work to connect the dots of why the U.S. Congress has moved further and further left over our lifetime and you won’t want to miss him. The Mid-Terms are coming. It’s time to clean House — and Senate! Get yourself prepared with facts. Don’t miss it!

If your TEA Party, 9.12, or patriotic group would like to have Trevor Loudon speak, please contact Regina Thompson.

Check out Trevor’s TOUR MAP AND SCHEDULE, constantly being updated with new events and venues.