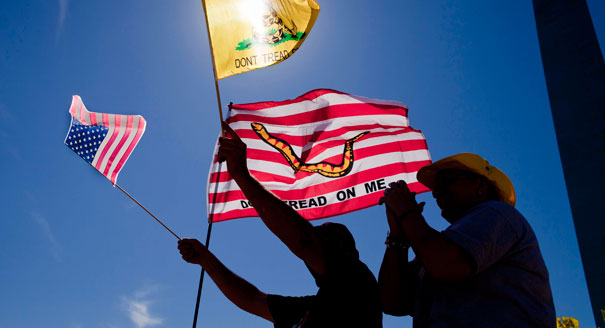 Happy 5th Anniversary to the Tea Party!!! Top 13 Things You Missed At Our 5 Year Anniversary Event

Alea iacta est… the Council has spoken, the votes have been cast and we have the results for this week’s Watcher’s Council match up.

“Alas! ye lordes, many a false flatterer
Is in your courts, and many a losenger,
That pleasen you well more, by my faith,
Than he that soothfastness unto you saith”. – Geoffrey Chaucer

“Treason doth never prosper: what’s the reason?
For if it prosper, none dare call it treason.” – Sir John Harrington

“Treachery is more often the effect of weakness than of a formed design”. – François La Rochefoucauld

This week’s winner, Joshuapundit’s Obama Appoints Hamas Ally To Key National Security Post, is my examination of yet another questionable appointment by President Obama to an extremely sensitive national security post… and what it signifies. Here’s a slice:

The man pictured above is Robert Malley. Today, it was announced that President Obama has appointed him the senior director at the National Security Council (NSC).

The NSC is the key body that advises President Obama and helps make decisions on national security and foreign policy matters. Its members consist of,among others, the vice president, the Secretaries of State, Homeland Security and Defense, the head of the Joint Chiefs of Staff, the Director of National Intelligence, the president’s National Security Advisor and the deputy Adviser, the Attorney General and the president’s UN Adviser.Other special assistants to the president also attend as required.

In other words, this is President Obama’s ‘inner cabinet’ on national security, so to speak. The members, the top level members of the Obama Administrations, are privy to all of America’s intelligence, planning and confidential data.

So who is Robert Malley?

Of Syrian descent,he was a Clinton-era National Security Council staffer known for his tirades against Israel and his championing of Yasser Arafat. He made waves by blaming the Israelis for the failure of the 2000 Camp David summit, thereby contradicting the words of President Bill Clinton and every other U.S. official present, and rationalizing and defending Arafat’s terrorist war on Israel’s civilians.

Malley was a close crony of then presidential candidate Barack Hussein Obama and a foreign policy adviser to the campaign back in 2008. Way back then, Candidate Obama still saw the necessity of getting clueless American Jews to vote for him, so when it surfaced that Robert Malley was meeting actively with the genocidal terrorist group Hamas, Obama took the opportunity to remove him from the campaign in 2008 as a gesture to prove his pro-Israel bonifides.

According to 18 U.S. Code § 2339B, providing material assistance to a designated terrorist group (which includes advice) is supposedly a federal offense, But Robert Malley had powerful friends (including Clinton NSA adviser Sandy Berger and Senator Barack Obama, whom he was pals with at Harvard) so he simply drifted back into the world of think tanks, where he could be relied on to write articles and make speeches demonizing Israel.

And actually, according to he Arabic-language newspaper Al-Hayat, Malley never really left Obama’s circle. Al-Hayat reported that Hamas engaged in talks with Obama for months through Malley, which among other things resulted in their receiving almost a billion of your tax dollars from President Obama.

Robert Malley comes by this honestly. His father Simon was a very Marxist journalist who shilled for Algeria’s terrorist FLN, Egyptian dictator Gamel Abdul Nasser, African Marxist dictators like Kwame Nkrumah and Ahmed Sékou Touré, Fidel Castro, and of course, Yasser Arafat, of whom he was especially fond. Needless to say, Simon Malley also had an outspoken hatred towards Israel, and the apple definitely did not fall far from the tree.

Once Barack Obama became president, as we now know, he spent a great deal of time during his first term concentrating on bashing and attacking the Israel, giving the Arabs whom identify themselves as Palestinians more U.S. money than they’d ever seen in their lives and in general behaving like Mahmoud Abbas’ own special community organizer.

That moderated a bit in 2012 when the president needed to fool people again for his re-election, but now that President Obama has no need to dissemble any longer, Malley will join the other members of the Obama Administration who have a long time record of hostility towards Israel.And he will be privy to America’s most highly classified secrets.

Malley has some interesting ties with Islamists worth looking at. Among Malley’s close associates is Wadah Khanfar, a Hamas activist based in the Middle East and South Africa (where he headed the International Islamic Federation of Student Organizations) and now a key figure with al-Jazeera, AKA Jihad TV. According to one of my sources, Malley also has a relationship with our old friend Muslim Brotherhood leader Yusuf al-Qaradawi, a foul genocidal maniac who is too dirty even to be allowed into the U.S.

In our non-Council category, the winner was Mark Steyn with Hath not a Jew Eyes, submitted by Liberty’s Spirit. It’s a bold and blatant look at mass Jew-hatred and how the Jewish community is unwilling to see it. Do read it.

Okay, here are this week’s full results. Only Nice Deb was unable to vote this week, but was not subject to the usual 2/3 vote penalty: