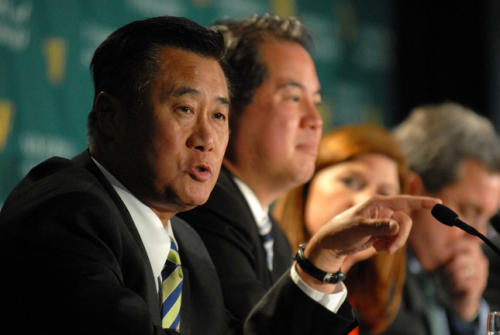 The Council has spoken, the sacred bones have been tossed, the votes have been cast and we have the results for this week’s Watcher’s Council match-up.

“We stand with Israel as a Jewish and democratic state. America’s commitment and my commitment to the security of Israel is unshakeable.” – President Barack Hussein Obama, 2012 campaign speech

I hate that man like the very Gates of Death who says one thing but hides another in his heart. – Homer, The Iliad

“He wears a mask, and his face grows to fit it.” – George Orwell, Shooting An Elephant

This week’s winner, Joshuapundit’s Obama Commends Abbas For ‘Consistently Renouncing Violence’ ???, is my reaction to a few things President Obama said about Palestinian leader Mahmoud Abbas during their cozy photo-op at the White House last week. Here’s a slice:

On Monday, before his meeting with Palestine’s unelected dictator Mahmoud Abbas, President Obama did the usual press appearance with Abbas and said something quite interesting:

Let’s examine that, shall we?

For starters, Abbas just signed a new unity agreement with Hamas, an organization that is openly genocidal and makes its members swear an oath to pursue a second Holocaust.

Abbas is a Holocaust denier, even if he lies about it today to handpicked audiences of Left wing Israelis. And his Moscow University thesis denying that the Holocaust occurred is a required part of Palestine’s educational curriculum.

Abbas and the Palestinian Authority under his control have always glorified the murderers of Israeli civilians. Mahmoud Abbas and Fatah, after all, are the same folks who made child murderer Sami Kuntar an honorary ‘Palestinian’ citizen and gave him a hero’s welcome after he was released in a prisoner swap. Abbas and his Fatah faction have made a point of naming public buildings and streets after murderers and teach their children about the virtues of killing Jews in their mosques, media and schools.

And Abbas pays terrorist murderers who are convicted in Israeli civilian courts monthly salaries to encourage further violent attacks against Jewish civilians, with the higher salaries for both Hamas and Fatah killers reserved for those who commit the most heinous murders and thus get longer jail terms.

The Fogel family who lived in the Jewish community of Itamar were at home relaxing after the Sabbath on March 11, 2011 when two Palestinians affiliated with the Popular Front for the Liberation of Palestine (PFLP) Hakim Awad and Amjad Muhammad Fawzi Awad carried out an ‘operation’ they had planned in advance. After cutting through a security fence, they broke into the Fogel’s home and murdered five members of the family pictured above, including a 3-month-old baby. They butchered them without even the regard a slaughterer usually gives to an animal. They are on the PA’s salary list, receiving top dollar because of the five life sentences they received.These are your tax dollars at work, courtesy of President Obama, the UN and the EU.

In our non-Council category, the winner was a simply masterful piece by John Hindraker over at Powerline, Washington Post Falls For Left-Wing Fraud, Embarrasses Itself [Updated With Post’s Response] submitted by The Glittering Eye. John caught the WAPO red handed publishing a completely false story designed to libel the Koch Brothers for partisan political purposes. And to add to the mix, written by a reporter who is married to a Democrat operative who works for the Obama Front group, the Center For American Progress.

As Rush Limbaugh famously said, these people aren’t journalists, but Democrat activists with a byline.