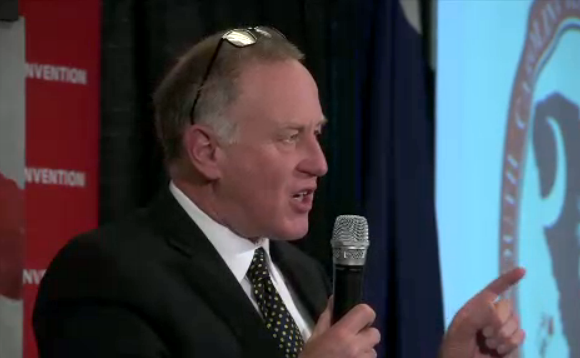 There was an old saying that if you wanted to know about America, “Ask a Frenchmen.” I’d be comfortable with that if we were talking about Alexis De Tocqueville and Frederic Bastiat, but nowadays I’d prefer if we asked an expert on Communism from New Zealand. Trevor Loudon is best known as the source that exposed Van Jones as an open Communist. Glenn Beck, a frequent reader of Loudon’s blog (http://www.trevorloudon.com/), first saw his reporting on Van Jones and pursued it with such vigor, the Obama “Green Jobs” adviser was forced to resign.

Loudon is now touring the U.S. and speaking about his latest book, THE ENEMIES WITHIN. I had the privilege of spending a few days with him when he passed through Illinois and one of the things that really struck a fire within me was his clarity on the issues and the path to success that he felt was achievable. At a tea-party meeting in Glenview, he brought the crowd to its feet with the following suggestion:

To get those people motivated, they all need something. To unify them, they need to be given something. If I was a man like Ted Cruz – I see him as the front runner and the most Reaganesque of the figures that are out there right now, I’d be wanting to unify that base right now, before Jeb Bush gets up a head of steam. So I’d go to them right now and say, ‘I’m running and the very first thing I’m going to do is put Allen West on my VP ticket, early, right now.

Then for you Libertarians, I want your million votes, Rand Paul will be Secretary of my Treasury and he can do what he damn well pleases to the Federal Reserve and the IRS – carte blanche.

And you energy voters – Sarah Palin, Secretary of Energy – “Drill baby, drill,” drill in your backyard if you want to, – Keystone pipeline, and $2/gallon gas for every American family.

John Bolton, Secretary of State – tell your enemies where to get off, rebuild your alliances. Ambassador to the United Nations – No one!

Dr. Ben Carson, Secretary of Health and Human Services – get rid of the welfare culture, get people’s pride in themselves back again. Attorney General, Mark Levin.

And for the Christians who don’t care about politics but they do care about the education of their children, “Vote for me this time guys and David Barton will be Secretary of Education.’ Common Core is gone, folks; homeschooling is protected.”

Then, speaking for himself, Loudon continued, “Go across the whole cabinet, name it now, you can fill in every slot. Will that motivate the base, guys?” (Crowd applauds) “Will that get you guys enthusiastic?” (Rising Applause) “Would you be opening your checkbooks again and getting your friends involved?” (Standing ovation)

When the applause finally settled and the crowd settled in their seats, Trevor Loudon added,

This is the 2nd American Revolution. You get a team in this election and you can have a 2nd American Revolution. You’ve never had a bigger base, folks, there’s more conservatives and patriots and constitutionalists and libertarians in this country than there’s ever been. There’s all these leaders out there who know exactly what it takes to turn this country around and are itching to do it. You unite the base with the leadership folks, and who is going to stand in your way?

Let us heed the wisdom from our brother who can see the answer for a reawakening of American freedom all the way from Christchurch, New Zealand. To do so, we must unite to defeat the enemies within – within the media, within the intelligentsia, within the halls of Congress and the White House and within our own party.

One thought on “Audacious Kiwi! Trevor Loudon’s America: A Path to Victory”