They wanted an Albanian-run Kosovo, and they got it: 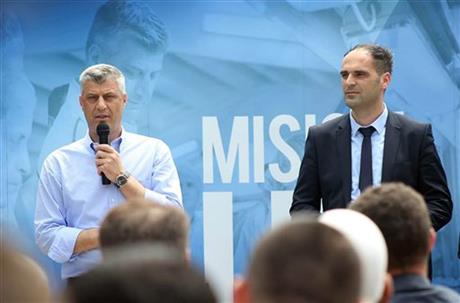 Kosovo police say a parliamentary candidate from Prime Minister Hashim Thaci’s ruling party was shot dead early Sunday as he walked out of a restaurant…Elvis Pista — a flamboyant politician recognizable for his spiked hair — was shot four times at close range shortly after midnight in the western town of Orahovac, his hometown. Authorities believe a handgun with a silencer was used.

Police did not discuss possible motives behind the attack but the slaying comes amid heightened tensions between political rivals after Kosovo’s June 8 parliamentary election. The final results were not in from Pista’s race but preliminary results showed him leading.

Thaci’s center-right party won the most votes last week but lacks a coalition partner to form a government. Rival parties have vowed not to govern with Thaci, citing widespread corruption and mismanagement.

In Orahovac, hundreds gathered Sunday to pay their respects.

Thaci, who called Pista “an associate and a friend,” condemned the killing and urged police to swiftly find who was responsible. Kosovo President Atifete Jahjaga also condemned the shooting, saying it threatened the rule of law in Kosovo.

Past elections in Kosovo were often marred by irregularities and violence between rival groups but no incidents were reported in the June 8 poll, the second such vote since Kosovo seceded from Serbia in 2008.

Meanwhile, another associate of Thaci’s:

Police in Kosovo launched a manhunt on Tuesday for three high-profile war crimes suspects who appeared to have fled a hospital where they were each being treated under guard while standing trial.

“The Kosovo Correctional Services have informed the presiding judge that they cannot locate three out of seven defendants in the so-called Drenica case,” said a spokesman for the European Union’s police and justice mission….He said all three had been due in court on Thursday.
…
Their escape will stir fresh suspicion about corruption in police ranks, in a country where former guerrillas enjoy hero status and often close ties to the political elite.

Many of those indicted are members of the governing Democratic Party of Kosovo of Prime Minister Hashim Thaci. He had led the rebel Kosovo Liberation Army, which fought a separatist war against Serbia… [Really? Not a war for human rights, but a separatist war? Are we admitting that these days?]

The indicted include Sami Lushtaku, now a mayor of the town of Srbica, and Sylejman Selimi, Kosovo’s ambassador to Albania, as well as one of Thaci’s bodyguards.
…
Lushtaku is suspected of executing a fellow ethnic Albanian by shooting him in the head….A protected witness told the prosecution that Lushtaku allegedly executed an ethnic Albanian because “the man had killed his cousin.”

“Sami Lushtaku put the pistol to the prisoner’s head behind his left ear and he shot him,” protected Witness D is quoted as having told the prosecution. “He fell to his knees and Sami shot him twice more in the head.”
…
Selimi, a former top military rebel commander, faces four charges of war crimes, including beating detainees with fists and wooden sticks, and being part of a group of rebels that pinched a detainee’s “genitals with an iron tool and subsequently dragged him on the floor with it,” according to the indictment.
…
Salustro also alleged that two other suspects, Sahit Jashari and Sabit Geci, allegedly used a chain saw to behead a Serbian policeman, Ivan Bulatovic, in June 1998…Bulatovic was kept in detention and frequently walked to a village square by Jashari for people to beat him in public, according to a witness described in the indictment as Witness C.

Sometime in June 1998, Geci “took the chain saw and beheaded Bulatovic with it. Then Geci made some deep cuts into Bulatovic’s chest, thigh and legs,” according to the witness testimony quoted in the indictment.

…EULEX works alongside Kosovo justice authorities, but the two have often clashed because the mission has targeted high-profile individuals and former rebels, some of whom are considered heroes by majority ethnic Albanians.

Newly elected mayor of the Municipality of Skenderaj/Srbica, Sami Lushtaku, was briefly taken from the Mitrovica detention center on Friday to his hometown to take the oath for third term in office.
…
Even in detention, Lushtaku was elected the mayor of the municipality on Nov. 3 elections with an overwhelmed support of 88 percent of the voters….Lushtaku returned to the detention center immediately after taking the oath…

…Twenty-four Albanians were shot, among them 13 children, and their houses were burned down…

“Everyone in Kosovo knows but none dares to speak about it,” says the former prime minister of the exiled Kosovars and current chairman of the New Party for Kosovo, Bujar Bukoshi. “After the war the cruelest cleansings took place among the Albanians. Under the pretext that they were ‘Serbian collaborators’, the leaders of the KLA liquidated their political opponents; old blood feuds were settled, and Albanian civilians were executed by the Albanians themselves.”

The number of the victims is estimated to be more than a thousand. The perpetrators or instigators were usually former senior KLA leaders; after the war they were integrated nearly without exception into the KLA successor organization, the civilian Kosovo Protection Corps.
…
Also awaiting trial…are once legendary KLA commanders Sami Lushtak[u] and Rustem Mustafa (”Remi”). The latter is accused, along with three other KLA officers, of having raped Albanian women and killed at least five civilians in private prison camps during and after the war.

…Belgrade presented the chief prosecutor in The Hague with a disk with 27,000 pages on the alleged war crimes committed by the top KLA triumvirate [Thaci, Ceku, Haradinaj]… “We know a lot,” says UNMIK spokesman Lindmeier, “but our problem is witnesses. They have a gun pointed at their head. Many withdraw their original statements after threats by their former KLA fellow fighters”.

The heroic elite which ended up in jail is guarded by about twenty prison wardens from Germany flown in by plane to do the job. Albanian guards received death threats if they attempted to prevent escape attempts.

For many Albanians the imprisoned KLA leaders are still war heroes. Every Friday demonstrators lay flowers in front of the prison in Pristina. They accuse UNMIK of developing “Milosevic tendencies”. The chairman of the journalist federation, Milan Zeka, has even called on his colleagues to fight against the “police dictatorship” of UNMIK chief Michael Steiner. The German, they say, is insulting a whole generation of Albanians. […]

Kosovo’s Mafia: How the US and allies ignore allegations of organized crime at the highest levels of a new democracy (GlobalPost, March 27, 2011)

“There was interference by the U.S. mission [to Kosovo] preventing effective investigation and prosecution of senior Kosovo officials,” said a U.N. official….The official said that the senior Kosovo politicians were being investigated for being allegedly involved in organized crime, and that U.S. officials prevented searches of the suspects’ homes and in one case were involved with U.N. officials in preventing a sentence from being carried out. The U.N. official said that these phone calls were “well known” and deeply frustrated many of the international prosecutors who were working for the United Nations and wanted to prosecute these Kosovo officials.

On June 14, 2008, the most senior U.N. official in Kosovo, Joachim Ruecker, issued an executive decision suspending the prison term of a former KLA commander named Sami Lushtaku, who had been sentenced to a total of 11 months in prison…In his order, which GlobalPost has obtained, Ruecker notes that Lushtaku’s sentence would make him legally ineligible to be mayor and “such an outcome would be politically highly sensitive at this stage and contrary to the public interest.” It is unknown if American officials influenced Ruecker’s legal decision, but a former senior NATO official in Kosovo said that CIA officials in Kosovo had tried to prevent NATO soldiers from arresting Lushtaku prior to prosecution.