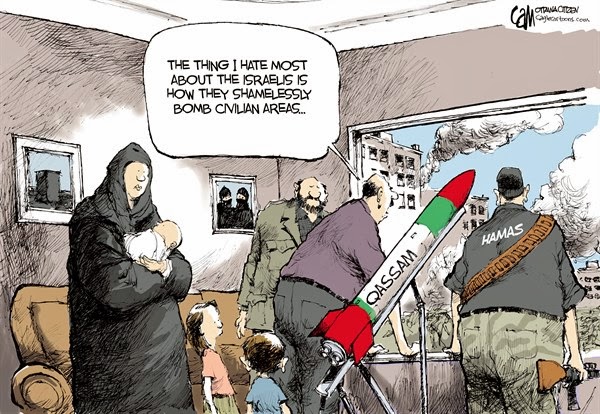 One of the most ludicrous quotes out there about this situation came from Secretary of State John Kerry, slamming the Hamas response to the Egyptian brokered ceasefire attempt:

“I cannot condemn strongly enough the actions of Hamas in so brazenly firing rockets in multiple numbers in the face of a goodwill effort to offer a ceasefire, in which Egypt and Israel worked together, that the international community strongly supports.”

Kerry said that Hamas is “purposely playing politics” by continuing the rocket fire, using innocents as “human shields… against the laws of war.”

“And that is why they are a terrorist organization,” Kerry added.

So, why are you and President Obama still funding them, Mr. Secretary? And why do you want so badly to give a terrorist organization a state?

*Yours Truly at Joshuapundit published two pieces over at the Times Of Israel, one pre-ceasefire, A Ceasefire In Gaza? A Huge Mistake and one post-ceasefire, The Ceasefire That Never Was Ends As Hamas Bombards Israel With Rockets.

So, let’s see what we have for you  this week…