So for now, the Obama administration will insist on keeping travel open between infected countries and the West and hope that they, and we, get lucky.

The CDC’s Frieden—who is an Obama appointee—has been almost comically oafish. On September 30, -Frieden declared, “We’re stopping it in its tracks in this country.” On October 13, he said, “We’re concerned, and unfortunately would not be surprised if we did see additional cases.” The next day he admitted that the CDC hadn’t taken the first infection seriously enough: “I wish we had put a team like this on the ground the day the patient, the first patient, was diagnosed,” he said. “That might have prevented this infection. But we will do that from today onward with any case, anywhere in the U.S. .  .  . We could have sent a more robust hospital infection-control team and been more hands-on with the hospital from Day One.”

Frieden answered: “I think there are two different parts of that equation. The first is, if you’re a member of the traveling public and are healthy, should you be worried that you might have gotten it by sitting next to someone? And the answer is no. Second, if you are sick and you may have Ebola, should you get on a bus? And the answer to that is also no. You might become ill, you might have a problem that exposes someone around you.”

Go ahead and read that again.

We have arrived at a moment with our elite institutions where it is impossible to distinguish incompetence from willful misdirection. This can only compound an already dangerous situation. 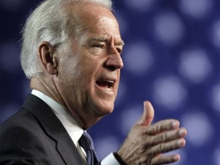 “Our allies in the region were our largest problem in Syria. The Turks were great friends and I have a great relationship with Erdogan, which I spend a lot of time with; the Saudis, the Emirates, etc.” beings Joe Biden.

Later today, or tomorrow I’ll add a few notes and links to this Resister’s Log entry, or a follow-up item. For now, please listen to every second of this very extraordinary video.

Yeah, yeah, we realize that RT is a propaganda ministry of Putin’s Russia – and they happen to tell big chunks of the real, pravda truth that the NWO West’s propaganda arms, including America’s significantly captured “intelligence community” and its alphabet media “fail” to tell.

The RT report doesn’t tell exactly where and to whom Biden said these things. Let’s find out.

And just what is behind this alleged failure? Let us not assume that incompetence and conspiracy are mutually exclusive.

Hat Tip: Conscience of a Conservative

New Film Highlights How Colorado Got Hijacked by the Left