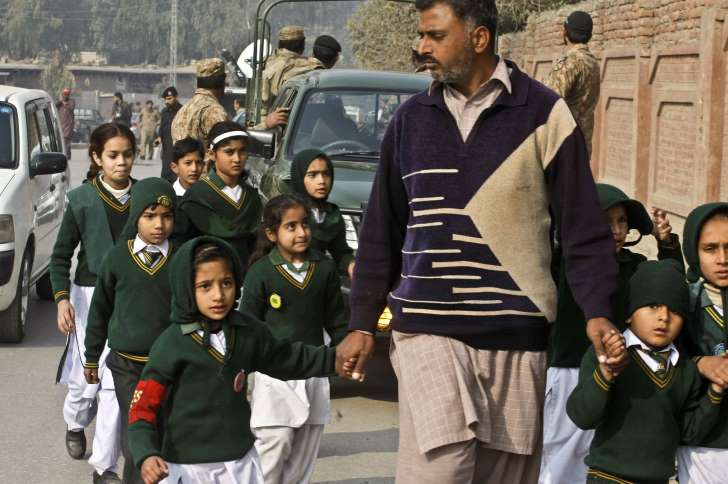 © Mohammad Sajjad/AP Photo – A plainclothes security officer escorts students evacuated from a school as Taliban fighters attack another school nearby in Peshawar, Pakistan, Tuesday, Dec. 16, 2014. Taliban gunmen stormed a military-run school in the northwestern Pakistani city, killing and wounding scores, officials said, in the worst attack to hit the country in over a year.

ISLAMABAD, Pakistan — Taliban militants disguised as soldiers stormed an elite army high school in northwestern Pakistan on Tuesday, killing at least 132 students and teachers and bringing defiant pledges to strike back harder against terrorism after one of the country’s bloodiest days.

Some children were beheaded. These are the savages that Barrack Hussein Obama praises, negotiates with and frees, that Hillary Clinton empathizes with and that Democrats want us to apologize to. Who will be next?

PESHAWAR, Pakistan — Uniformed militants attacked a school, killing at least 126 people and taking hostages on Tuesday, an official said – an atrocity condemned by the U.S. as “senseless and inhumane.”

“The gunmen entered class by class and shot some kids one by one,” a student who was in the school at the time told local media.

Provincial official Bahramand Khan said at least 126 people were killed and 122 injured. More than 100 of the dead were school children, he added. The Pakistani Taliban claimed responsibility for the assault, which appeared to be targeting the the children of senior military officials.

Bombs planted by the attackers slowed rescue efforts, a military official said, adding that operations at the scene were “closing up”.

Commandos exchanged fire with gunmen who entered the Army Public School in Peshawar. Five “heavy” explosions were heard from the school at around 5 a.m. ET. The Pakistani military later said six Taliban militants had been killed.

About 500 students and teachers were believed to be inside the site when gunfire erupted, although it was unclear how many remained inside the school.

A military source who spoke on the condition of anonymity told NBC News that the attackers were wearing police uniforms and suicide vests. “They burnt a teacher in front of the students in a classroom,” he added. “They literally set the teacher on fire with gasoline and made the kids watch.”

Some child hostages were thought to be held at gunpoint by militants in the school’s main auditorium. The military-run school has students in grades one through 10.

‘Burn teacher alive in front of pupils and behead children’…