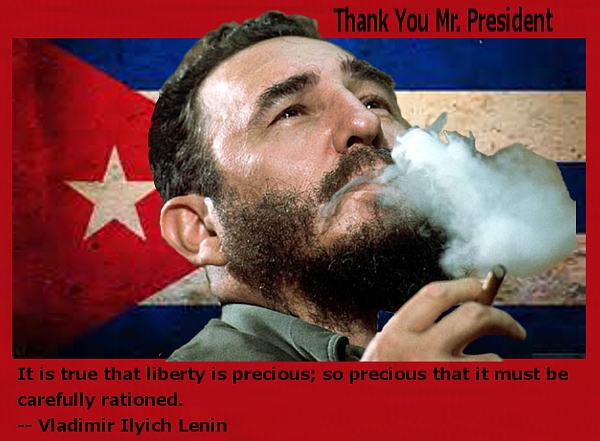 Every week on Monday morning, the Council and our invited guests weigh in at the Watcher’s Forum with short takes on a major issue of the day, the culture or daily living. This week’s question: What Are Your Thoughts On President Obama’s Normalizing Relations With Cuba?

The Razor: I support it. The Castros have been using the embargo to justify the failures of their rule and normalization would strip that away. You have the same Cuban families on both sides of the Florida straits and the prosperity on one side is hard to hide. My only issue with it is that it’s happening under the Obama administration, so I’m sure it will be a disaster just as everything else has been in the foreign policy realm.

Simply Jews: This question is probably a subject for a longer and better augmented post, but to be brief, I shall try to digest my roaming thoughts all the same:

Since the demise of the Soviet Union and cessation of Soviet support so vital for Cuban economy, the US policy on Cuba remained unrevised and caused unnecessary 20+ years of hostility. And, of course, unnecessary suffering to Cubans.

The end to embargo (not there yet) and opening the borders to economic and cultural ties would have effectively finished off the oppressive dictatorial regime many years ago without any need to resort to exploding cigars and other outlandish and stupid ideas.

The Cubans today are kept as serfs to a rotting and crumbling regime that relies on the relatively privileged army and secret police as the last bastions that keep it intact and will crumble in the same way the Soviet regime crumbled all these years ago, if only the economic, cultural and, especially, information gateways were opened for all – to see how the life could be.

The right wing political camp in US was (still is) in thrall of the influential Cuban immigrants’ lobby that ties its hands in all matters concerning Cuba. And let’s not forget that at least some of the more influential and rich Cuban emigres are still pining for the corrupt and dictatorial Batista’s regime… ’nuff said.

Of course, what Obama so far achieved is too little, but I hope it’s not too late and the continuation will come. The more tourists from the US, the more goods and information from the free world come to Cuba, the quicker the demise of the regime there will be.

The sooner the better.

JoshuaPundit: What do I think about President Obama Normalizing Relations With Cuba? I think it means he’s quit cigarettes and is now smoking cigars. 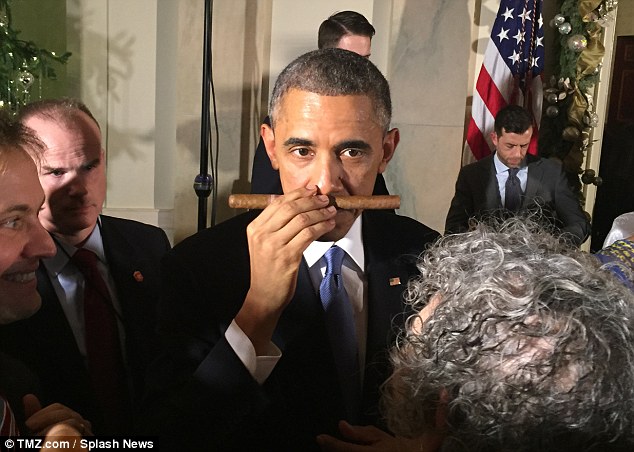 About all I can do is joke about this, because it’s a disaster in the making.

The regime itself was on the verge of collapse, because the Maduro regime in Venezuela could no longer afford to give the Castros subsidized oil. So instead of allowing it to fall or even encouraging its demise, this president has now thrown this brutal regime a lifeline that will keep it in power.

Cuba is only ninety miles from the U.S. Think about that for a moment. It is a regime aligned with our enemies and as Raúl Castro informed President Obama in a 30 minute lecture, nothing’s changing.

The embargoes kept a lot of bad actors away from Cuba. Not only are they now free to come in, by the entire use of embargoes as a means to counteract bad behavior short of war has been undermined.

Once President Kennedy allowed the Monroe Doctrine to be breached by backing out of the Bay of Pigs invasion after it had already started, the Soviets realized that Castro could be their entry into the western hemisphere and just a year later they had their missile bases installed on the island. The confrontation that followed once our intelligence found out about it almost started a nuclear war.

Imagine what would happen if history repeated itself? The Russians are already sniffing around. What if Iran makes a clandestine deal with Castro and we wake up one day with Iranian ballistic missiles aimed at our shores? What if China decides that Havana would be a superb spot for a naval base to extend their reach into American territorial waters? What if the Cuban regime itself receives nuclear weapons from, say, North Korea? Especially at a time when America’s missile defense and nuclear weapons, just like our conventional military are already at historic lows?

And remember, the Cubans are going to get an embassy on our shores out of the deal which will be nothing but a den of spies and a security risk.

I’m afraid I have little patience with people that argue that after 50 years, we need to change policy, that trade and tourism will benefit the Cuban people and eventually lead to more freedom. These are the same arguments a number of people made when talking about the Soviet Union between WWII and the 1970′s and they helped it keep going for years.

Profits from trade and tourism aren’t going to trickle down to ordinary Cubans.They will go to the regime’s elites, with a select few being allowed access to the goodies as the carrot for loyalty and good behavior, with the stick very much in evidence for anyone who displeases the regime in any fashion. And rest assured, the Cubans not are going to be allowed free access to the internet, to publications, to radio, to films or to anything that displeases the regime, contradicts its propaganda or undermines its iron grip on their throats.

As sickening as it is that we would betray the many Cubans whom seek freedom, it’s even worse that would would betray our own interests and our national security. That’s exactly what this amounts to… a major foreign policy debacle.

The Independent Sentinel: All I have to do is repost the first paragraph from the NY Times article December 20th: “President Raúl Castro declared victory for the Cuban Revolution on Saturday in a wide-ranging speech, thanking President Obama for “a new chapter” while also reaffirming that restored relations with the United States did not mean the end of Communist rule in Cuba.”

Laura Rambeau Lee, Right Reason: President Obama makes another sweeping statement, this time decreeing he intends to normalize relations with Cuba. We have not seen any announcement or agreement on the part of the Castro regime to bring freedom and democracy to the people of Cuba in return for re-establishing diplomatic and trade ties with America. Several members of Congress have said they had no idea these negotiations were even occurring although apparently they have been going on for over a year. This appears to be another ill-conceived unilateral executive action. So why is President Obama doing this?

Whether you believe we should lift the decades old embargo or not, we do need to consider the parties who will benefit the most from this action. Very likely billions of our tax dollars will be given in aid to the Cuban government in an ongoing effort of the president to redistribute our wealth, most of which will end up in the pockets of those in positions of power in the Castro regime.

Of course, American corporations will benefit by opening factories in Cuba and hiring cheap labor. The lives of Cubans might improve a little, but they will remain isolated from the rest of the world as they have been since Castro came to power. Cuba has had diplomatic and trade relations with many countries around the world, and the Cuban people continue to live in poverty and fear. Why would anyone believe if America opens diplomatic and trade relations with Cuba the lives of the people of Cuba will improve?

This is all about wealth re-distribution and cheap labor for American corporations.

The Right Planet: I shouldn’t say I was shocked by Obama’s unilateral action to normalize relations with Cuba. But it is shocking to watch a U.S. president simply ignore the past and make nice with a despotic regime. My South American friends see this as throwing a lifeline to the Castro regime, since Cuba’s close ally, Venezuela, is quickly going belly up, due to plummeting oil prices. But along comes Obama to pluck them from disaster.

What did the U.S. get in return? The release of a USAID worker and an intel agent, Rolando Sarraff Trujillo, held in Cuba for the past two decades. But Cuba got everything they wanted. I suspect, too, that this unilateral decision by Obama has something to do with closing Guantanamo Bay. And why didn’t the U.S. demand the return of cop killer Joanne Chesimard, who was convicted of killing a New Jersey state trooper in 1973 during a gunbattle after being stopped on the New Jersey Turnpike?

The Glittering Eye: The embargo on Cuba was imposed specifically for the purpose of producing regime change. A half century later it still hasn’t done that and at this point I think it’s reasonable to think it never will. Both sides in the argument about the president’s recent announcement have good points. Those who oppose them object to subsidizing the Castro regime and think that we haven’t struck much of a deal in the negotiations. Those who support the president’s move point out that we haven’t gotten anywhere with the embargo, abandoning it would be of economic benefit to the U. S., and it’s time for a change. I think the economic argument is much exaggerated. LIberalization will be much better for Cuba than it will for us.

IMO liberalization of travel will be a stronger weapon against the Castro regime than the embargo. It will be interesting to see how Cubans react to visits from their relatives in the States and to the consumer goods and information they bring with them.

The whole matter strikes me as another example of something that has become a very bad habit for the president, not enlisting the support of Congress, even Democrats in Congress, before announcing a change in policy. There isn’t a lot the president can do in the absence of cooperation from the Congress and an announcement out of the blue does little to foster that cooperation.

In the final analysis whether the policy change is just a photo op or whether there is actually material change will depend on what the president and Congress agree on. We’ll just need to wait and see.

One thought on “Forum: What Are Your Thoughts On President Obama’s Normalizing Relations With Cuba?”