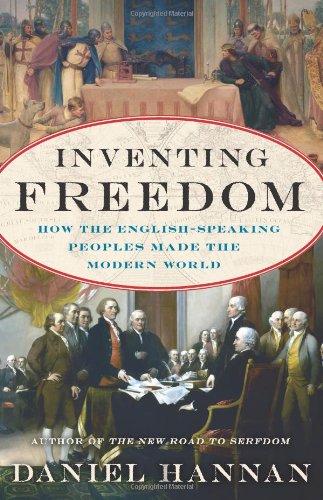 Inventing Freedom: How the English-Speaking Peoples Made the Modern World by Daniel Hannan is a magnificent journey through history and politics. Thought-provoking and emotionally gripping, this book is a must read for those who cherish liberty and the law. It is a triumphant testament to English history and one of my all-time favorite books. Hannan’s masterpiece is also bawdily politically incorrect in its attitude – I simply love it!

From the Back Cover:

Why does the world speak English? Why does every country at least pretend to aspire to representative government, personal freedom, and an independent judiciary?

In The New Road to Serfdom, British politician Daniel Hannan exhorted Americans not to abandon the principles that have made our country great. Inventing Freedom is a much more ambitious account of the historical origin and spread of those principles, and their role in creating a sphere of economic and political liberty that is as crucial as it is imperiled.

According to Hannan, the ideas and institutions we consider essential to maintaining and preserving our freedoms—individual rights, private property, the rule of law, and the institutions of representative government—are not broadly “Western” in the usual sense of the term. Rather they are the legacy of a very specific tradition, one that was born in England and that we Americans, along with other former British colonies, inherited.

The first English kingdoms, as they emerged from the Dark Ages, already had unique characteristics that would develop into what we now call constitutional government. By the tenth century, a thousand years before most modern countries, England was a nation-state whose people were already starting to define themselves with reference to inherited common-law rights.

The story of liberty is the story of how that model triumphed. How, repressed after the Norman Conquest, it reasserted itself; how it developed during the civil wars of the seventeenth and eighteenth centuries into the modern liberal-democratic tradition; how it was enshrined in a series of landmark victories—the Magna Carta, the English Civil War, the Glorious Revolution, the U.S. Constitution—and how it came to defeat every international rival.

Yet there was nothing inevitable about it. Anglosphere values could easily have been snuffed out in the 1940s. And they would not be ascendant today if the Cold War had ended differently.

Today we see those ideas abandoned and scorned in the places where they once went unchallenged. The current U.S. president, in particular, seems determined to deride and traduce the Anglosphere values that the Founders took for granted. Inventing Freedom explains why the extraordinary idea that the state was the servant, not the ruler, of the individual evolved uniquely in the English-speaking world. It is a chronicle of the success of Anglosphere exceptionalism. And it is offered at a time that may turn out to be the end of the age of political freedom.

There is no one like Daniel Hannan. A speaker that commands attention and stands above everyone else, his writing is excellent and his prose gives history life. Inventing Freedom is one of those rare books that teaches and entertains. The principles and ideals of freedom are universal and are what have made America the great nation she is. America inherited individual rights, private property, the rule of law and the institutions of representative government from England. But we took it further and in a more independent direction I contend. Hannan chronicles Anglosphere exceptionalism and how, if America is not careful, we could lose it and our freedoms as we have always known them.

FrontPage Magazine does a tremendous review of the book – here’s a slice:

The fundamental incoherence of multiculturalism comes from its cultural relativism that posits no one way of life is better than another, but then singles out the West as a uniquely oppressive global villain. Even more contradictory, at the same time that multiculturalists slander the West for its alleged crimes, they praise and promote political and social ideals––democracy, freedom, equality, and law-based justice–– that flourish only in the West. This cognitive dissonance is made possible by massive historical ignorance of just where such ideas originated and developed. The great value of Daniel Hannan’s Inventing Freedom lies in its recovery of that history, and the role that the “Anglosphere,” the English-speaking countries, played in recognizing and nurturing those ideals for over 1500 years.

Hannan is a writer, blogger, and currently the Conservative representative of Southeast England in the European Parliament, where he vigorously monitors and battles the dirigiste excesses and autocratic impulses of the European Union functionaries. He is also a stalwart friend of the U.S., a throwback to the days when the “special relationship” between Britain and the U.S. was instrumental in turning back the fascist, Nazi, and communist assault on everything that comprises the liberal democratic ideals universally admired and imitated, even by those illiberal regimes who must pay lip-service to democracy and freedom even as they work to subvert them. Readers will find in Inventing Freedom an immensely readable, clearly argued survey of those ideals, the history in which they struggled to survive, and the great heroes whose sacrifice and commitment to them ensured that we enjoy them today.

You should read the whole review – it’s comprehensive in scope.

This book is a slap upside the head of Leftists. As Benjamin Weingartin at The Blaze says, it “argues for the superiority of the Anglosphere in terms of the culture, values and institutions that it has bequeathed us…if we can only keep them.” Benjamin and I think a great deal alike and we love and respect Hannan’s work. You really need to read this book. It is a keeper.

If you are a patriot and a fighter… if you are proud of your American heritage and English history… this book is for you. Right here, today, we fight the fight that Ronald Reagan spoke of. It is a fight for freedom we dare not lose.

“Freedom is never more than one generation away from extinction. We didn’t pass it to our children in the bloodstream. It must be fought for, protected, and handed on for them to do the same, or one day we will spend our sunset years telling our children and our children’s children what it was once like in the United States where men were free.” – Ronald Reagan in his Time for Choosing speech (October 27, 1964)

Hannan covers the gambit of history from the 10th century through today. It is a sweeping historical and political discussion that engages and inflames a patriot’s desire. Daniel Hannan makes the steadfast argument that the separation of powers, with sovereignty of the legislative branch representing the people, over and above the executive, and protections for the smallest minority, the individual, are in fact the fundamental building blocks on which an Anglosphere government was built. It remains to be seen if Americans still have the intestinal fortitude to embrace the principles of which Hannan extols upon, or whether they will submit to Progressivism ushering in a new Dark Age. This book should be part of our fight to reimplement our founding principles. Get your copy of Inventing Freedom: How the English-Speaking Peoples Made the Modern World today. It’ll become one of your favorites as well.