John Bolton explains the TRUTH about ‘no-go zones’ in Europe

The Quest for 67: Which Dems May Defy Obama on Iran Sanctions Nice Deb: I imagine Michael Moore will be a frontrunner in the Weasel Follies, this week, but I’d like to nominate a lesser known weasel who I feel also distinguished himself in a repulsive fashion.

Ferrari Sheppard writes for the Huffington Post, and unlike say – Christian Nigerians – this black man knows the real pains of war. 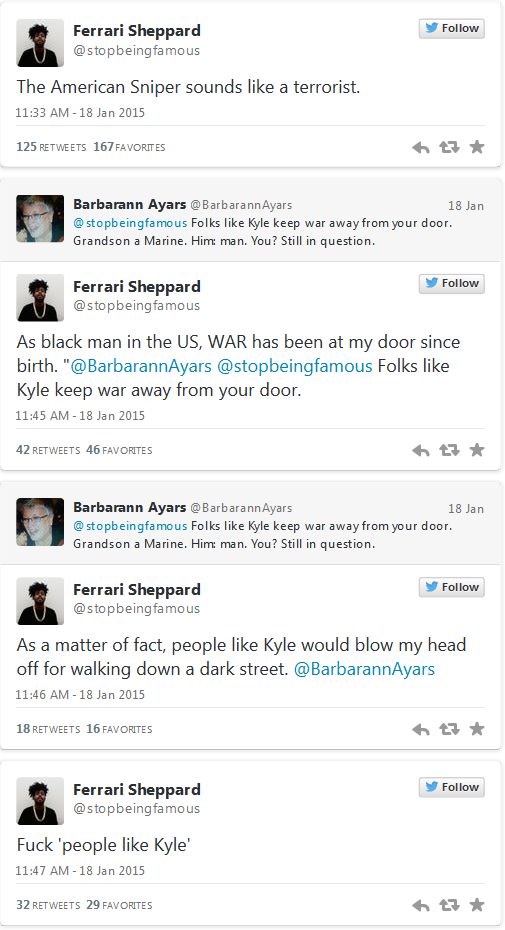 No,that pretty much says it all right there, doesn’t it? The film American Sniper as my dear friend Bookworm wrote earlier (in a piece you seriously ought to read) is a real litmus test. The film’s cinematic merits or lack of merits aren’t the point at all. What we have here is a movie portraying an American soldier in heroic colors, a throwback to the sort of films Hollywood used to produce before the inmates took over the asylum. And that’s the issue.

Something like American Sniper and the responses from people like this weeks’ Weasel show the division clearly. There are those Americans whom still honor heroes like Chris Kyle who go into harm’s way to serve our beloved country and keep the rest of us safe… and then there are the sort of termites whom feed and grow fat on our society and not only contribute nothing of worth to it, but seek to bring it down to their own putrid level and destroy what makes it great bit by bit. I doubt that gap can be bridged. Nor, personally speaking, am I particularly interested in doing so.

Mr. Sheppard, your Weasel is richly deserved and I’m happy to present it to you. As a great man once said, you do your worst, and we will do our best.