After last week’s barbaric execution of a Jordanian pilot who was burned alive, the King of Jordan is vowing shock and awe against ISIS. I believe he will give it everything he’s got, but it won’t be enough. Military equipment is very, very expensive to get and maintain. The US is already giving Jordan $1 billion in economic and military aid this year and has signed an agreement with Jordan boosting security assistance by up to $400 million a year through 2017. But Obama has refused to give them drones and vital military equipment that could actually go towards defeating ISIS and the clock is ticking. Since Obama’s sympathies lie with Islamic extremists, I believe he wants to see Jordan fall and he may very well get his way. Jordan is being forced to use ineffective bombing campaigns, either putting many civilians or their pilots at risk and they will have a very limited success against ISIS.

As Jordan begins its military maneuvers against ISIS in Syria, they have released a video montage highlighting their military prowess and kicking off their retaliatory air campaign. It is a moving display with fighter pilots showing their might and Jordanians writing messages on bombs meant for the barbaric hordes of ISIS. Over 20 Jordanian F-16s struck ISIS targets while US F-22s, F-16s, surveillance and tanker aircraft supported them. The video is meant to show Jordan’s strength, but what it reveals is disturbing on a number of fronts. 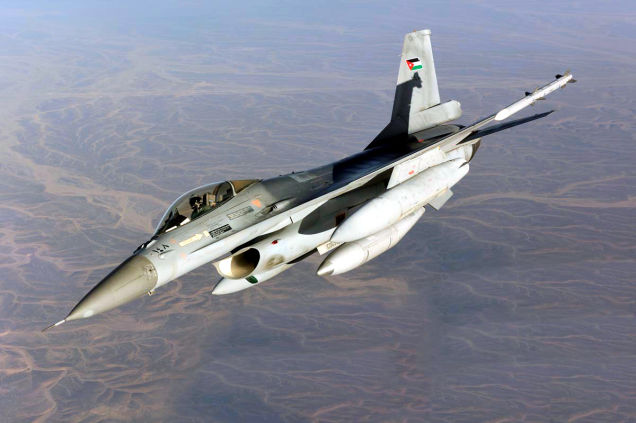 During wartime, it is common to see messages written on bombs to one’s enemies. The Jordanians are also putting messages on the noses of their second-hand F-16s. Most swear vengeance and decry ISIS’ ideology. But according to FoxTrotAlpha, what stood out the most was the fact that those F-16s are loaded with dumb bombs. Very few in Jordan’s fleet seem to have precision guided munitions loaded onto their weapon’s stations. Those that have them are smaller and older. These were GBU-12 laser guided bombs that are more suited for bombing small buildings and vehicles than larger structures.

Dumb bombs are much more accurate at lower heights. The lower the bomber goes, the better chance he has of hitting the target. The higher the bomber is when he deploys, the greater his Circular Error Probability is. This is true even when F-16s are used with digital avionics employed. Using this method of weapons delivery from over 15,000 feet, above most man portable air defense systems (MANPADS) and anti-aircraft fire, it makes hitting individual targets very dicey. One way to overcome this issue is to throw more sorties at each target, but for each attack made, the risk to aircrew making follow-on attacks increases. It also increases the likelihood that civilians will die as a result of additional bombings.

If the decision is made to bomb at lower altitudes, the pilots risk being taken down by anti-aircraft and small arms fire. Their chances of hitting their targets is greater, but the risk of being killed or captured rises dramatically. This would be foolish tactically of both Jordan and the coalition to take this approach. More rescue missions would ensue, meaning even more risk for military personnel. The unsettling possibility that Jordan may be putting aircrew at high risk due to the possible lack of adequate guided munitions also comes as US CSAR assets are now confirmed to be operating out of northern Iraq, a move that seems way, way overdue.

What the widespread use of dumb bombs by Jordan equates to is a set of puzzlingly simple tactics being used, ones that are highly ineffective or highly risky, while trying to obtain a very complex outcome. If Jordan hit all high-priority targets on a targeting list, they are either doing so at great peril to any innocent people nearby, or to themselves and the coalition, or they are creating a target list based on their limited weapons stores and capabilities.

This would mean that they could be selecting a few high-priority urban targets for precision guided munitions and the rest of the targets would be those in rural areas with little potential for unintended casualties when dumb weapons are applied. Either way, dictating what targets you hit, especially on the first day of a highly invigorated air campaign, based on the limited munitions you have at hand is a poor way to fight a modern air war in 2015 and it could usher in either a large loss of innocent life, which could dangerously erode support for the operation as whole in the region, or Jordanian forces are mainly hitting very low priority targets that are located literally in the middle of nowhere.

Another issue that could have led to the use of so much unguided weaponry could be Jordan’s lack of targeting pods for their F-16AM/BM fleet. Costing millions of dollars themselves, they could be, and probably are, in very short supply. This would make the delivery of precision guided munitions impossible for much of the RJAF F-16AM/BM fleet as Jordan has not purchased GPS guided Joint Direct Attack Munitions (JDAMs) that do not require a laser targeting pod when used against fixed targets. 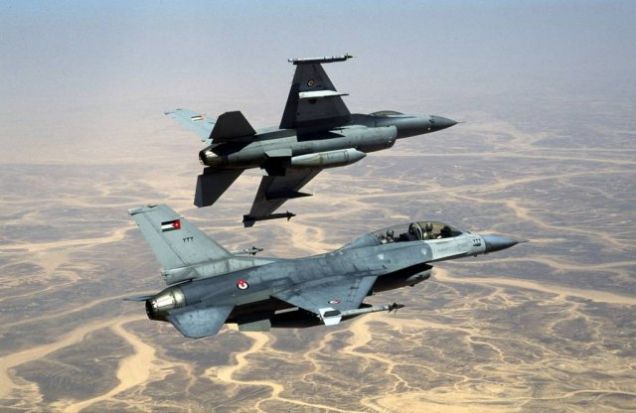 When you take into consideration that this first strike by Jordan sent out half their fleet and that only a small number of their jets were using precision guided munitions, it becomes apparent that the Jordanian’s don’t have the means to sustain a projected air campaign against ISIS. Not without help anyway. This explains why King Abdullah went to DC to plead with Obama for munitions, countermeasures, fuel and spare parts. They will need all of that and more to combat ISIS over the long haul. I am surprised that the Jordanians were not prepared for such a development and that their weapons and military situation is so dire. They are not prepared for a protracted war and don’t seem to have faced the fact that one would eventually come.

I also find the targets that the Jordanians went after perplexing. After the US has spent months bombing the heck out of ISIS, how could there possibly be such large targets left on the list that the Jordanian F-16s could go after using unguided weaponry? After this long a period, those large targets should all be decimated. The only possible explanation points directly to the US and Barack Obama not being serious about taking out the enemy. It should not have been that difficult, considering ISIS does not posses an integrated air defense system or any aerial defenses at all beyond shoulder-fired missiles.

If the U.S. is in fact dragging its feet when it comes to striking ISIS targets deep inside Syria then the whole operation needs to be questioned. If this is not the case and these are just new targets acquired from recent intelligence, then how are they magically low enough of a priority to have Jordanian F-16 pilots slinging dumb bombs at them? Or if they are not new, but are of such a low priority that they were not even worth hitting with precision weapons by coalition forces long ago, then why on earth are we risking Jordanian and American air crews on them at all? If ‘optics’ is the answer then Washington has some serious explaining to do.

If Jordan’s use of a large portion of dumb bombs on its first ‘alpha strike’ against supposedly key ISIS targets in Syria is a matter of lack resources on Jordan’s part and lack of prior commitment on the coalitions part, then the U.S. should immediately transfer large stocks of precision guided munitions, targeting pods and spare parts to Jordanian forces to that they can continue to do what the US and the coalition will not — keep the pressure on ISIS in their own backyard via precision air power. Additionally, considering it costs America way more to field similar expeditionary forces in the region over the long haul, reinforcing Jordan’s fighter and ISR (information, surveillance, reconnaissance) fleet should be examined in the near term as well. There are plenty of used F-16s available and U.S. stocks of precision guided weapons are better off being used by Jordanian pilots protecting their own region than American ones sent there to do it for them. 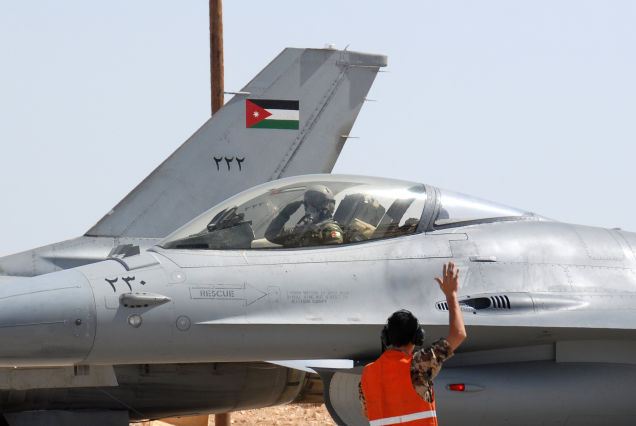 The Jordanian video is a sleek piece of propaganda meant to intimidate their enemies. But ISIS is very adept at their own propaganda. Just putting fighter jets in the air and bombing alone does not speak to a strong strategy for winning a war or defeating a brutal enemy. I am sure that King Abdullah knows this and that is why he went to DC. His enemies will see through the video and they know exactly what the score here is unfortunately.

The whole coalition approach to defeating ISIS and the Caliphate is flawed and doomed to failure if things don’t change and radically. No one has put forth a serious plan to eliminate ISIS – one that lays out taking out their leadership and strongholds. One that includes executing them en masse and meeting barbarity with swift and deadly force. I see no concise strategy for victory here… just the opposite in fact. Not even close.

As I have said from the beginning, Obama seems to have no strategic plan to defeat ISIS. He is bombing targets that have little to no effect. The US definitely has some explaining to do here. I personally do not believe that Obama has any intention of defeating ISIS. He supports the Caliphate and those that will rule it. The entire anti-ISIS operation as a whole is rigged for failure. There has been a lot of big talk by Obama and others on how ISIS needs to be defeated, but there is no really plausible strategy for victory, yet alone the resources available needed to realize it when it comes to Jordan. King Abdullah came to DC hat in hand to plead with Obama for more military help and all he left with was his hat and faux assurances. 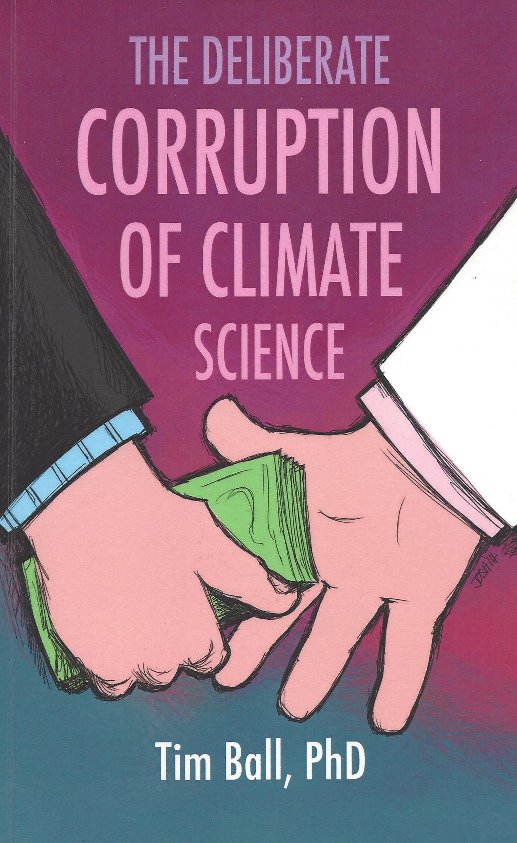 Propaganda over “climate change” is designed to usher in more socialism and an anti-human agenda. So what can we do about it? That’s the topic as Dr. Timothy Ball discusses his new book, “The Deliberate Corruption of Climate Science.” This is critical because the Pope has joined Obama on the climate change bandwagon. Dr. Ball has written: “The Pope apparently did not think through his commitment to the IPCC [UN Intergovernmental Panel on Climate Change] claims as expounded by the Obama White House. Likely, he was easily persuaded, because so much of the false claims fit his socialist ideology.”