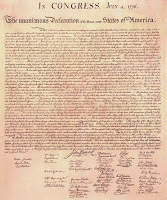 It all starts with:

When in the Course of human events, it becomes necessary for one people to dissolve the political bands which have connected them with another, and to assume among the powers of the earth, the separate and equal station to which the Laws of Nature and of Nature’s God entitle them, a decent respect to the opinions of mankind requires that they should declare the causes which impel them to the separation.

We hold these truths to be self-evident, that all men are created equal, that they are endowed by their Creator with certain unalienable Rights, that among these are Life, Liberty and the pursuit of Happiness. — That to secure these rights, Governments are instituted among Men, deriving their just powers from the consent of the governed…

How much of this is taken for granted or, in many cases, ignored?  Is there any consensus on our nation’s relationship with Nature’s God, our Creator, or have we drifted so far from our foundation as to make God irrelevant in the workings of government?

The founders of this country were, for the most part Christians, with teachings of the Lord from the Bible as their starting point for setting the standard of government.

Christians, regardless of denomination, believe in God, maker of Heaven and Earth and in all things above and below; but how many Americans actually believe our nation was the result of divine intervention?

My reason for asking is to establish common ground whereupon a proper discussion of America can be carried forward.

The creation story is found in the book of Genesis; but its interpretation is up for grabs depending on who you talk to.  Some claim God made everything out of ‘nothing’, a divine magic trick; but it is my belief that God organized existing matter and formed this Earth as a place for His children to enjoy mortality.  All aspects of the creation were considered as part of the necessary environment for mankind.  If you chose to believe otherwise, have at it; but my beliefs (*) trump yours as long as I’m writing.

And God said, Let us make man in our image, after our likeness…So God created man in his own image, in the image of God created he him; male and female created he them. 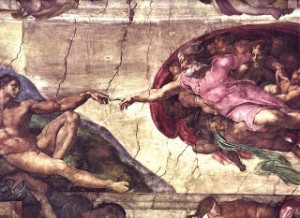 You have to ask, why would God fashion man after his own image?

We, each one of us regardless of the color of our skin or where we began mortality here on this spinning planet, each of us is a child of God.  He is our Eternal Father, our Creator.  Laws in the universe are eternal in nature; gravity, physics, math, chemistry and so on; they are constant and unchanging…the same as God; the same yesterday, today and forever.

I read an article by John Pratt many years ago, Did God Write the Laws of Physics?   He started off with a speculative line, “Did God write the laws of physics or are they self-existent and God just follows them perfectly?”   I don’t claim to have the answer; but isn’t that a wonderful way to start a discussion?  Would any of the answers offered by John Pratt add to your comprehension of the Creation?  Just wondering…

God . . . hath given a law unto all things, by which they move in their times and their seasons; And their courses are fixed, even the courses of the heavens and the earth, which comprehend the earth and all the planets.  Doctrine and Covenants 88:41-43 (but read the entire section)

If we’re going to give God credit for the Creation; perhaps a better choice of words is in order…  If we are going to show gratitude to God for having created all of this, and ‘all of this’ isn’t an exaggeration; then at some point we have to accept that He had some eternal plan for ‘all of this’, to include each and every individual ever born.

The New Testament provides a simple and all encompassing answer to the Creation.

Modern scripture provides a fairly compact answer for why everything was created.  It’s found in The Pearl of Great Price, Moses 1:39.  (It should be pointed out that the Bible, the word of God as recorded by men, has lost many plain and precious passages over the years which have altered or lost important doctrine.  Modern revelation has been provided to restore original doctrine.  (See *)

For behold, this is my work and my glory—to bring to pass the immortality and eternal life of man.

Our Father in Heaven has great hope for each of His children; those who lack this important piece of information as pertains to their relationship with God might contend that life is finite; there is nothing beyond a cold grave, that’s it.  How much brighter would our outlook be if we were aware of and took to heart the Great Plan of Salvation; the challenges of life would be so much easier to bear.

If you responded, “Hey, don’t bother me; it’s time for another hour of Dancing with the Stars”, then you found this article by mistake.  For the rest of you, the journey toward appreciating citizenship in this particular nation becomes a little more important.

(Read between the lines and consider the unrest in Ferguson or Baltimore; what, if anything, do rioters and thugs know about the Creation and how we fit in as individuals?)

The Heavens didn’t assemble themselves randomly; they were organized with purpose of thought.  America didn’t happen by coincidence either.

The courts consider Intelligent Design (ID) nothing more than Creationism or pure religion being foisted on the public.  This is the result of a concerted effort to remove religion from the public square, schools and government institutions.

ID or Creationism isn’t permitted because of the ‘wall of separation between church and state’ which the Supreme Court manufactured from thin air based on their interpretation of the 1st Amendment along with a letter Thomas Jefferson wrote containing that combination of words… as no such wording is found in the Constitution.

I’m getting off topic; but how can we share our love of country with each successive generation, our appreciation of how we’ve been blessed by our Creator when important parts of that history are now considered unfit to teach because it requires religion or faith?

This land was reserved for a righteous people by that same Being who created everything.  This information is recorded in The Book of Mormon for those willing to invest some effort.

If you exhibit a particle of faith, even as a mustard seed, and accept the possibility that The Book of Mormon is true then you will advance to the next logical progression of thought, If the Book of Mormon is the word of God then Joseph Smith Jr. was a prophet of God, a modern day Moses if you will, because only a man hand picked by God could have translated such a book.

It then follows that other modern day scriptures were intended to enlighten God’s children; the Doctrine and Covenants and The Pearl of Great Price being classified as modern scripture.  Don’t take my word for any of this; ask your Father in Heaven.

If any of you lack wisdom, let him ask of God, that giveth to all men liberally, and upbraideth not; and it shall be given him.  John 1:5

Our nation was the result of God’s divine providence and our founding documents were brought about through selected individuals with a willingness to do His work.  Having men of integrity and faith becomes more important historically as we consider how we must continue in their footsteps even in our day.

And for this purpose have I established the Constitution of this land, by the hands of wise men whom I raised up unto this very purpose, and redeemed the land by the shedding of blood.   Doctrine and Covenants 101:80

A short review is in order… We are children of our Eternal Father in Heaven who created us in His own image for the express purpose of giving each individual a chance to advance through the eternities as we follow the same eternal laws He does in order to become as He is, having perfected immortal bodies with eternal life.

Our Creator did this as part of a grand plan which required organizing chaotic matter floating about the universe in such a way as to permit our tiny planet the ability to sustain life in all its glorious forms.

(I place no time limits on the Creation and accept that the Lord’s time is not the same as our time.)

Knowing the nature of His children, Jesus Christ was sent as an Atoning sacrifice or not one of us would be worthy to return.  A small portion of the planet, the land we now call the United States of America, was reserved as a safe haven, a place where men might live the laws of God without the yoke of servitude under kings and despots and eventually return to Him.   This is the promise of America and our experiment in self governance.

The French historian Alexis de Tocqueville recognized America’s goodness a couple of hundred years ago when he wrote:

Sadly, too many of my fellow citizens have either forgotten or ignored the goodness of America Tocqueville observed.  How else can we explain current events which portray so many individuals embracing evil and showing contempt for all the blessing showered down on us?

To find America we need only look to our Creator and follow His commandments.  A simple solution; it starts with each individual doing what is right, not with someone in government mandating our actions.

One thought on “American Thoughts”