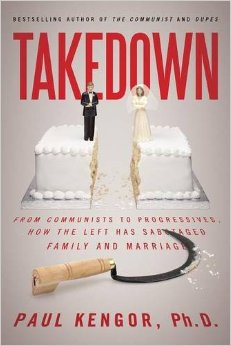 Paul Kengor’s new book, Takedown: From Communists to Progressives, How the Left Has Sabotaged Family and Marriage, provides a detailed explanation of why, according to a new Gallup poll, “Americans are more likely now than in the early 2000s to find a variety of behaviors morally acceptable, including gay and lesbian relations, having a baby outside of marriage and sex between an unmarried man and woman.” Gallup notes, “Moral acceptability of many of these issues is now at a record-high level.”

What we are witnessing is a “shift to the left” that has been carefully orchestrated and planned over the course of decades. It is a phenomenon known as “cultural Marxism,” the application of Marxism to culture rather than the economic sphere. Kengor’s book, published by an arm of WorldNetDaily, outlines how this movement has operated, naming the names of the individuals and organizations that have been part of it, and how they have reached their zenith under the presidency of Barack Obama and the Democratic Party.

Significantly, he writes, Obama’s “most enduring legacy may be on American culture,” not in economics or foreign policy.

This seems mystifying, since as a candidate Obama had presented himself as a strong family man and a Christian, with two young daughters and a wife devoted to them. And yet, Kengor, author of The Communist: Frank Marshall Davis: the Untold Story of Barack Obama’s Mentor, has documented how Frank Marshall Davis, a communist atheist and pedophile, had an enormous influence on Obama. Kengor documents this yet again in the chapter of his new book, “The Gay-Marriage President and His Mentor.”

A professor who has written several books on politics, religion, and anti-communism, Kengor focuses on the role of the universities, especially Columbia University, in this cultural transformation. He calls them “indoctrination centers.” The products, he writes, “now pervade other cultural institutions critical to changing society’s opinions: media, television, films, education, and, the greatest influencer of all…the Internet, where they commandeer engines like Google and Yahoo! and Facebook and Mozilla…”

The evil genius behind the “fundamental transformation” of America lies in making it appear that this descent into immorality and paganism is somehow “progressive,” and a move to a higher level of consciousness. The book documents how the Judeo-Christian foundations of this country are being dismantled right before our eyes. It is not an accident. It is the planned destruction of America and the religious values that gave birth to our political and economic freedoms.

As recently as the 1990s, Kengor points out, there was a bipartisan consensus that children needed to have a dad and a mom. Now, that consensus has been rejected, as fatherless or motherless families are being embraced. Things have happened so quickly, he notes, that “everyday Americans” have even been conditioned to embrace major aspects of this revolutionary change.

As a student of the Marxist notion of dialectical change, I found Kengor’s treatment of the Marxist call for the “abolition of the family” to be fascinating. He devotes several pages to a discussion of what Marx meant by that phrase, and whether abolition means termination or gradual transcendence. What cannot be disputed is that the destruction of the traditional family results in more power for the government to control our lives and interfere with families. “As long as the traditional family is reversed,” he notes, “Marxism is advanced.”

The Marxist viewpoint was openly expressed by Professor Melissa Harris-Perry of MSNBC, who advocated a “collective notion” of control of children in advertisements for the cable channel. “We have to break through our kind of private idea that kids belong to their parents, or kids belong to their families…” she said.

As the family unit withers away, the government would take control of the children.

The next step is for “progress” or “evolution” to a new level, with such concepts and arrangements as multiple wives, group marriages, sibling marriages, fathers and stepfathers marrying daughters and stepdaughters, and uncles marrying nieces.

If you think this is somehow impossible, Kengor quotes directly from a group called “Beyond Marriage,” which has issued a statement, “Beyond Same-Sex Marriage: A New Strategic Vision.” Prominent among this group is Chai Feldblum, a Georgetown University law professor and a commissioner on the Equal Employment Opportunity Commission (EEOC) under President Obama.

The author of the paper, “Gay Is Good: The Moral Case for Marriage Equality and More,” Feldblum argues, “the moral case for supporting the range of other creative ways in which we currently construct our intimate relations outside of marriage.”

What is particularly disturbing about this progression is that Georgetown advertises itself as the nation’s oldest Catholic and Jesuit university. It seems difficult to square its Catholic reputation with having someone like Feldblum on the payroll “teaching” students. Then, again, this is clearly part of the transformation that has been going on for decades and which is meticulously documented in the Kengor book.

Kengor is astounded by this turn of events, about how “everyday mainstream Americans” have come to accept ideas and concepts that are destroying their very own country. “We are breaking new ground in the long, long sweep of human history,” he writes, “and the groundbreakers act as if it is no big deal whatsoever…”

What’s worse, as we have repeatedly noted, the so-called “conservative media” have abandoned the struggle as well, as Fox News personality Greg Gutfeld and the once-conservative National Review have endorsed same-sex marriage. (Gutfeld has been rewarded with his own show on the Fox News Channel).

So what is the way out of this cultural collapse?

Kengor, a Roman Catholic, devotes a whole chapter, “The Voice of Sheen,” to the wisdom of Catholic Archbishop Fulton J. Sheen, who had popular radio and television shows and wrote two important books, Communism and the Conscience of the West, and Peace of Soul. Sheen understood how Marxism was designed to destroy the traditional family.

“The Universal Roman Catholic Church was far and away the dominant international voice of opposition to the communist movement and its tumultuous machinations,” Kengor notes.

Fulton Sheen died in 1979, but DVDs of his talks and programs are still extremely popular among traditional Catholics.

Strangely, Kengor’s book begins with a quotation from Pope Francis about the threat to the family, as if the current pope will somehow emerge as a Fulton Sheen-type of Catholic or world leader. Instead, however, Francis has embraced pro-homosexual priests, the United Nations agenda, liberation theologians, Barack Obama, Raul Castro and Mahmoud Abbas.

By contrast, Sheen supported traditional Catholic teaching on homosexuality and had described how “false compassion” was “gradually growing in this country” to the point where “pity…is shown not to the mugged, but to the mugger…to the dope fiends, to the beatniks, to the prostitutes, to the homosexuals, to the punks…” He spoke up for the “decent man,” who, he said, “is practically off the reservation.”

Today, the decent man is not only “off the reservation,” but is in danger of extinction himself.

Ironically, the liberals tried to demonize the late Senator Joseph McCarthy (R-WI) by asking, “Have you no sense of decency?,” when he investigated communists in the federal government. Yet, as the Kengor book makes clear, McCarthy didn’t go far enough; the Marxist manipulation of culture was never examined in the detail that was required.

Now that we can see the damage and destruction all around us, the decent men and women of the United States can see they are in danger of losing their families and their country. The book Takedown is must-reading so we can understand the terrible predicament we are in.

But whether we will get the moral leadership we need from the churches remains to be seen. Some religious leaders will try to make peace with the “change,” while others will resist it on the basis of sound principles based on natural law. Kengor notes that another objective of the cultural Marxists is the complete “takedown of religious institutions,” so more confrontations are on the way. The plan is to “rob” Americans of their First Amendment religious freedoms.

He quotes the aforementioned Feldblum of “Catholic” Georgetown University as saying, “I’m having a hard time coming up with any case in which religious liberty should win.”

Will the Republican presidential candidates come to the defense of the “decent man” and the traditional family? Or will they pander to the progressive constituencies demanding special rights for an increasing number of sexual minorities?

This is an “especially exciting time for extreme leftists,” Kengor writes, for they are “genuinely transforming human nature” and America itself, with “the unwitting support of a huge swatch of oblivious citizens and voters.”

But the American revolutionaries of 1776 faced overwhelming odds and their descendants may not go away quietly.