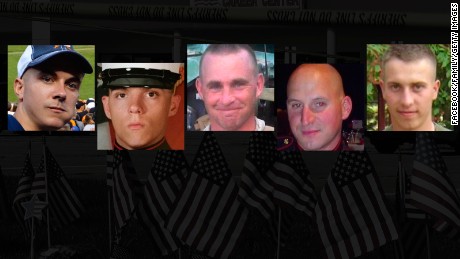 Every week on Monday morning, the Council and our invited guests weigh in at the Watcher’s Forum with short takes on a major issue of the day, the culture, or daily living. This week’s question: What Was Your Reaction To The Chattanooga Attack?

Don Surber: C-in-C should order every officer (commissioned and non-com) to carry a sidearm when on duty stateside. Exemptions for chaplains and working physicians. Maybe a few other MOS. National Guard and reservists would be up to the discretion of commanders as a matter of protocol, while preserving the authority to order so. Any civilian who feels uncomfortable can kindly resign/retire from DoD.

Puma By Design: Courtesy of the dysfunction in the present administration, America’s enemies are at war with us on U.S. soil empowered by our so-called leaders who are in denial, stupid and in the pockets of our enemies while at the same time, refusing to call this evil by its name.

America’s enemies are targeting our service members and their families because it is a known fact that they are not armed.

ARM THEM. They have the right to defend themselves…and us ON American soil.

In Chattanooga, the dark one liner is “From DUI and weed to J!had in 90 days.” Busted in April, it appears he made a fast conversion to violence.

We often prided ourselves here about our easy going laissez-faire attitude. Not anymore. Was this cat self radicalized? Inspired by the mosque? Both? Doesn’t really matter now as armed vigilance is replacing the Coexist stickers and memes.

We really need all the prayers and good vibes y’all may send.

JoshuaPundit: Unfortunately, the minute I heard about this atrocity, I knew exactly what was coming. The theme by the media, assorted political figures and the Obama Regime, as always, was to repeat the mantra of ‘senseless violence.’ Hillary Clinton said it, as did the president, Defense Secretary Ash Carter, Florida senators Bill Nelson (Democrat) and Marco Rubio (Republican).

And of course, no one can imagine why this happened. Nothing to do with Islam, surely! The Pentagon will investigate this for months to let everybody forget about it, and our president will determine what they’ll say. They can’t call it workplace violence like Fort Hood this time, but maybe they can work the mental health angle. Never mind that every attack involving Muslims resulting in mass casualties or attacks on military facilities like this has been jihadist in nature.

These attacks are not senseless violence. They are directed attacks, whether carried out by so-called lone wolves or otherwise.  The orders are in the Qu’ran, and there’s enough evidence on Mohammed AbdulAzeez’s computer thus far to show the usual pattern – jihadist social media,  and as I’m sure we’ll eventually find out, a jihad preaching mosques with a radical, Islamist imam somewhere in the picture.

Since 9/11. we, or at least the people we’ve chosen to lead us have made the point time and time again that we’re ‘not at war with Islam.’ Maybe, but anyone observing the world as it is would have to be in a coma not realize that a significant part of Islam’s adherents consider themselves at war with us. That, or willfully deceptive.

A normal country faced by these kind of facts would secure its borders, limit visas to countries where jihadists and Islamists tend to thrive, and vet very carefully those visas that were approved. It would place Islamist front groups as well as mosques and madrassahs under close scrutiny and eliminate those preaching jihad, radicalizing young Muslims and/or thought to be a security risk. Most important, government facilities like military recruiting offices or bases that are obvious targets would be hardened and guarded with armed security.

We are doing none of these things. In fact, since Barack Hussein Obama became president, we’re doing exactly the opposite.  There have been numerous attacks, planned and executed against U.S. military facilities on his watch, and yet, the mantra coming out of the White House is always the same..’senseless violence.’

Here’s a thought as uncomfortable for me to write as it may be for you to read. The four Marines and the Navy Petty officer whom were murdered in Chattanooga may be mourned by us, but in a very real sense, we have their blood on our hands for not calling our elected officials to account…especially this president.

The one covenant a leader has with those he or she rules is to protect a country’s sovereignty, its people and its borders.  America does not have that.

If we had any national self respect we would be thronging by thousands in the Capital, and flooding the congressional switch boards demanding this president’s impeachment. We would be  insisting on immediate action to remedy this situation rather than sitting back placidly waiting for  the next attack.

We would be screaming bloody murder.

The Right Planet: My initial reaction was one of outrage, followed by profound sadness for the families and friends of those murdered in cold blood in Chattanooga. You know, it’s not like ISIS and its ilk haven’t expressed their desire and intent to kill members of our military right here at home. Furthermore, there have been some 34 service personnel killed at military facilities within the United States on Obama’s watch—specifically, one soldier killed at a Little Rock recruiting station in 2009, 13 murdered at Fort Hood in the same year, three more killed at Fort Hood in 2014, 12 killed at the Washington Navy Yard two years ago, and now four Marines and one Navy petty officer are dead in Chattanooga. Several state governors, including my own, have ordered their National Guardsmen to start carrying weapons. But, to my knowledge, no such orders have been given at the federal level to allow U.S. troops the ability to defend themselves.

Via the LA Times:

Despite being active-duty servicemen with military weapons training, few of the victims in these attacks had an opportunity to defend themselves, thanks to Department of Defense Directive 5210.56, enacted in 1992 under President George H.W. Bush.

That policy strictly limits the military and civilian personnel who can carry firearms at military facilities to those in law enforcement or security roles. U.S. bases and recruiting centers have been “gun-free zones” ever since.

There have been recent reports of civilians with legal-carry permits standing guard at a few recruitment centers. How messed up are things in this country when civilians must provide security for own troops? Enough, already … ARM OUR TROOPS!

Laura Rambeau Lee, Right Reason: What is my reaction to this terrorist attack? I am at once saddened at the tragic loss of life of four Marines and one sailor, yet angered that this has happened again on America soil.

The shooter’s name was Muhammad Youssuf Abdulazeez, a 24 year old Kuwaiti born naturalized American citizen whom friends described as a “devout Muslim.” It is reported he traveled to Jordan in 2014 and to Kuwait and Jordan in 2010. Friends said he changed after his last trip to the Middle East.

In a media/theater of the absurd, we are being told not to jump to any conclusions about his motivation for these attacks. Isn’t it time we got past wanting to know the shooter’s motivation in these all too familiar scenarios? No one questioned Dylan Roof’s motivation for his slaughter of nine Black church members in Charleston, South Carolina. It was racism – end of story.

Reports are coming out that Adbulazeez suffered from depression. Perhaps a religion that teaches hatred of all non-believers and rewards martyred jihadis with seventy-three virgins might lead to depression… and violence.

I am mad that the rules on military bases and these recruitment centers prohibit our service members from being armed. At the very least, this policy should be changed immediately. They must be able to carry firearms, especially knowing they have been specifically targeted by ISIS for attacks. To have served heroically overseas and then to return home only to be attacked in a store front recruiting center should send chills down everyone’s spines, and maybe wake up some. President Obama says we are not at war with Islam, but we should be past the point of acknowledging radical Islamists are at war with us.

I’m willing to let the Pentagon decide whether soldiers in recruitment centers or on military bases carry sidearms or whether they should be ordered to do so.

As of this writing whether there are ties to Al Qaeda or DAESH, whether the perpetrator of the murders was mentally ill or not, and just what lead him to kill people are all unknown. Policy considerations need to be conditioned on actual circumstances rather than imagined ones. Maybe he was radicalized on the Internet or self-radicalized or had some conversion experience on a visit to family in Jordan. We just don’t know.

ARM THEM… They have the right to defend themselves…and us ON home soil. As Judge Jeanine Pirro said in her opening statement this past weekend: They Want To Kill Us, They Determine To kill Us… And They’re Here.

For anyone who thinks this is extreme, just look at Switzerland, a neutral and one of the most peaceful countries in the world. Every adult is a trained member of the Swiss militia and they keep their weapons at home on the ready. In 2011 the Swiss law and tradition was tested and put to a vote. Let us remember our own history and minutemen who were armed and ready to defend themselves and freedom at a minutes notice and step back to using common sense!!