Who are the individuals and Muslim Brotherhood front organizations responsible for their influence in the administration of Barack Hussein Obama?

Original at Stand Up America.

Editor’s Note: Obama and his minions have tried their best, and largely succeeded, to purge the U.S. military of patriotic officers who love this country.  As a result, under Obama, America’s best interests are always put last.

This group of retired and decorated officers and experts, led by MG Paul E. Vallely, offers all Presidential candidates advice on forging  a national strategy that is in the best interests of America!

Last week, MG Vallely, along with several staff members of Stand Up America US visited Washington, D.C. to attend several events and to launch the Legacy Group, an SUA project.

The events included a full meeting with the entire Legacy Group, the Citizens Commission on Benghazi, an evening with friends hosted by MG Vallely, and a reception hosted by Congressman Ryan Zinke, R-MT. There were several other meetings and interviews.

The Legacy National Security Advisory Group (LNSAG) is set up to advise presidential and congressional members and candidates on national security and military strategy.

As a well-recognized leader with impeccable characteristics and talents, the best and the brightest have gravitated to his side and are unparalleled in their fields and endeavors.

To commemorate the trip, here are several photos capturing the events:

MG Vallely arriving at the Citizens Commission on Benghazi then off to be interviewed by Frank Gaffney, Founder and President of the Center for Security Policy. Also pictured are the General with his Senior Middle East Advisor, Mr. Nagi N. Najjar, and SUA Marketing Director, Kevin Moore at breakfast that morning.

A group picture at the reception includes from left to right, Clare Lopez (standing), and seated on the couch are Roger Aronoff of Accuracy in Media, and Ray Tanter of the Iran Policy Group.

MG Vallely speaks with Clare Lopez of the Center for Security Policy and the Citizens Commission on Benghazi.

Another moment of group conversation.

Reception hosted by Congressman Zinke seen on the left next to his wife Lola, and accompanied by Tony Shaffer, MG Vallely, Kevin Moore, Tommy Sears and Nagi N. Najjar 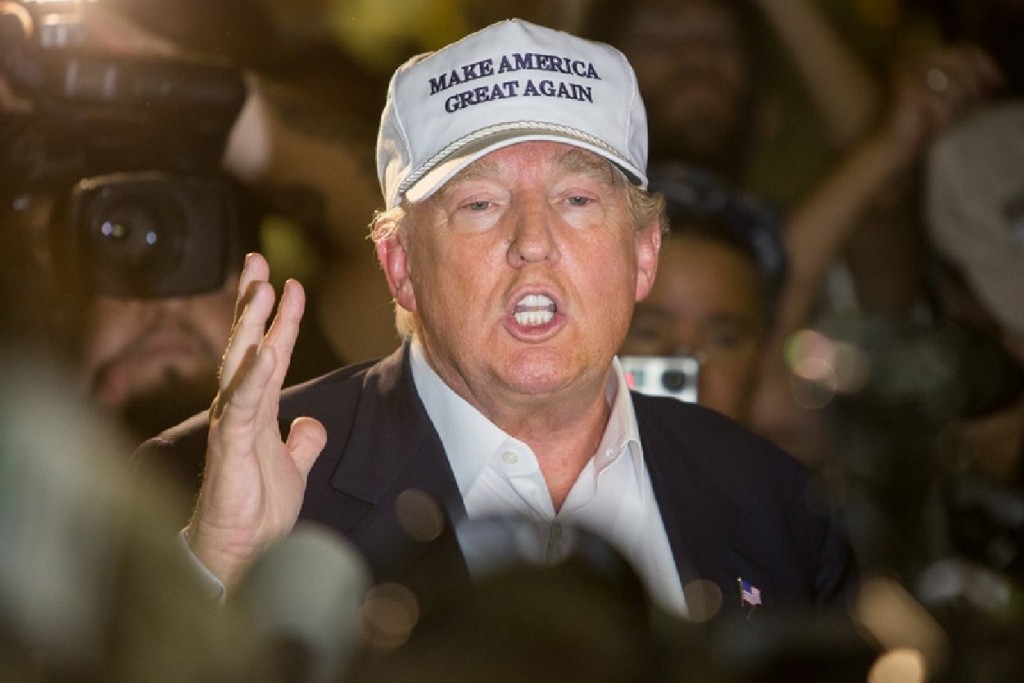 I know. I know. As a veteran political activist, I am supposed to be extremely upset with Donald Trump, out there saying what some on both sides of the political aisle consider to be outrageous things.

But folks, I cannot help myself. It is thrilling to watch someone in the arena of ideas not playing the game according to the dictates of the Left. For far too long, our anti-America enemies on the Left have been allowed to set the rules of engagement. The Left dictates what truths we can say out loud, what words we are permitted to use and what is racist or mean.

Please note. I am neither supporting nor opposing Trump’s comments. I am celebrating Trump’s refreshing unprecedented fearlessness in dealing with the iron-fist out-of-control bullying tactics of the Left/MSM.

I guess it goes back to my childhood living on the mean-streets of Baltimore projects. I detested bullies. They were cowards and mean opportunists. My cousin Jimmy, who loved to fight, taught me the power of a strong military. I was small as a child. When bullies took my lunch money, cousin Jimmy ended the problem. Nothing serious happened, but the bullies knew not to “mess” with Jimmy’s cousin, Peanut (my nickname).

I view the mainstream media and their Leftists partners as the ultimate bullies, whipping Americans into submission, silencing our right to free speech. It sticks in my craw that daring to state an opinion other than the Left’s combined consensus on an issue means your derriere is grass.

It also distresses me that whenever a conservative/Republican says something that the Left chooses to distort and become hysterical about, folks on our side run to microphones to say, “What so-and-so should have said or really meant to say is…” Why surrender to the Left’s distort-and-become-hysterical tactic?

Why kowtow to the Left/MSM, especially when we know they are wrongly interpreting conservatives’ comments on purpose; publishing distortions, exaggerations and lies about what a particular conservative/Republican said?

The Left/MSM allows Democrats to make off-the-cuff outrageous inflammatory statements insulting millions of Americans. Waters – “The tea party can go straight to hell!” Grayson — “Republicans want you to die quickly.” Schultz – “Republicans want to see you dead.” Carson – “The tea party wants blacks hanging on a tree.” Obama about middle America – “Clinging to their Bibles and guns.” Indicting millions, President Carter said an “overwhelming portion” of the opposition to Obama is because “he is a black man.”

Remember the Democrats’ outrageous lying ad showing a Republican pushing an old lady in a wheelchair over a cliff?

Then, there was the absurd shameful irresponsible Democrat ad warning blacks that if they do not vote, they will need to send their kids to school wearing bulletproof vests to protect them from being shot by white police.

Has the MSM demanded that these Democrats apologize/walk back any of their false statements or hate generating ads? No.

Meanwhile, a conservative/Republican has to market test every word that comes out of their mouths, less they suffer the Left’s hysteria/wrath and shoulda-coulda-woulda from fellow conservatives/Republicans. Folks, with the MSM deck so stacked against us, standing up to the Left is extremely challenging. I just wish our side was more forgiving and supportive of our fighters.

Name me one occasion in which a conservative/Republican walking back a statement caused the Left/MSM to forgive him or her. Never. To the Left, an apology is blood in the water, causing a media feeding frenzy to devour a conservative or Republican. Every time one sheepishly apologizes, it is another notch on the Left’s gun barrel; letting the world know they are in charge.

This is what makes Trump’s defiance so remarkable and exhilarating. Thus far Trump has not fallen for the Left’s tactic and become terrorized into walking back his comments. As a matter of fact, Trump routinely doubles down on his original statements. Sorry folks, but I love it. There’s a new sheriff in town. His name is Donald Trump.

Another trick of the Left/MSM is to claim that their hysterical reactions reflect the feelings of a majority of the American people. However, Trump’s addressing illegal immigration shot him to the top of the polls.

Some say Trump is muddying the waters for “serious GOP candidates.” I am not going to argue either way regarding that point. I will say that it is about time someone stood up to these vipers (Leftist media).

A recent incident bears witness to how far PC and Leftist bullying has gotten out of hand; infecting the Democratic party base. Democrat presidential candidate Martin O’Malley was speaking at a Democrat Netroots conference. He was interrupted by protesters screaming about “black lives matter”. The protesters demanded that O’Malley repeat their mantra. Allowing the protesters to hijack the meeting, O’Malley said black lives matter. But when O’Malley added white lives and all lives matter, the audience exploded in outrage, erupting with boos and curse words.

Am I grateful for what Donald Trump has done? You betcha!

Washington, D.C.:  The Center for Security Policy today released a new paperback version of the monograph by investigative journalist James Simpson: The Red-Green Axis: Refugees, Immigration and the Agenda to Erase America.

This report extensively details the networks of radical left non-profits, foundations, government agencies and the personalities behind them. Unbeknownst to most Americans they are using refugee resettlement as a pretext to import waves of immigrants from third-world nations as a key front in Obama’s strategy of “fundamentally

transforming” America. These refugees have little interest in assimilating. Many are from Muslim countries, view immigration as “Hijra” i.e. a subversive means to invade a foreign nation, and have demonstrated a willingness to either support or engage in terrorism both in America and abroad.

These groups are coached by leftist non-profits to capitalize on our generous welfare programs and shown how to maneuver around legal impediments – all at our expense – but are not being taught how to assimilate. The report conservatively estimates welfare costs at $10 billion per year. Additionally, government resettlement contractors receive $1 billion annually in federal tax dollars and non-profits supporting the agenda are provided billions of dollars from non-profits like George Soros’ Open Society Institute.

The President has launched a “Welcoming America” initiative which seeks to “seed” refugees throughout our communities and weed out “pockets of resistance” with a full-throated effort vilifying anyone opposing his radical agenda. It is literally an offensive to erase American laws, traditions and culture, and replace them with a pliable, multi-cultural society that will vote the Left into the “permanent progressive majority” it seeks.

Jim Simpson has done a characteristically exacting investigation of the extent to which the red-green axis – the radical left, with its activists, contractors, philanthropies and friends in the Obama administration, and Islamic supremacists – have joined forces to use U.S. refugee resettlement programs as a prime means to achieve the ‘fundamental transformation’ of  America. His expose is particularly timely against the backdrop of the government sponsored effort to ‘Welcome New Americans’ and suppress those who understand the imperative of “resisting” the migration to and colonization of this country, or hijra, that Shariah-adherent Muslim believed they are required to undertake.

The Center for Security Policy/Secure Freedom is proud to present Mr. Simpson’s monograph as a superb addition to its Civilization Jihad Reader Series.

For further information on the threats shariah poses to our foundational liberal democratic values, see more titles from the Center for Security Policy’s Civilization Jihad Reader Series at http://www.centerforsecuritypolicy.org/civilization-jihad-reader-series/

Buy The Red-Green Axis: Refugees, Immigration and the Agenda to Erase America in paperback or Kindle format on Amazon.

A PDF of the newly released monograph is embedded below: