The Hillary email scandal-palooza began on July 31 with Judge Sullivan’s declaration demanding Hillary and her staff certify certain conditions with regard to all the emails being turned over to the State Department.

On August 8, 2015, Hillary signed a certification document under penalty of perjury that all materials within server communications have been provided to the State Department. Concurrent to this action, the FBI visited the Denver IT company, Platt River that provided email support and redundant systems to the Hillary server established in her home in 2009. Of note, this server was NOT Bill’s server as she previously stated.

The two page certification signed by Hillary is found here.

Most important to readers here is the fact that the communications of the two emails in question that originated from the CIA were transmitted via a controlled pathway to the State Department, from there, someone(s) at State had to find a unclassified printer and computer to create hard copies, re-format them into electronic form and then email them to Hillary meaning that others at State are surely going to be investigated and caught up in the web or dragnet of culpability.

A 7 page email document chain is found here where the classified material is simply chilling.

On August 11, the Intelligence Community Inspector General briefed several members of the Senate as well as James Clapper, the Director of the Office of National Intelligence on the exact classifications of at least 2 newly discovered emails, which at the time of transmission were given the classification rating of TS/SI/TK/NF. This classification is the top confidential rating designation. Of particular note is the ‘TK’ rating which means Talent Keyhole, stemming from signals intelligence/geo-spatial via the CIA. These communications are only done on highly controlled systems and within a SCIF system. 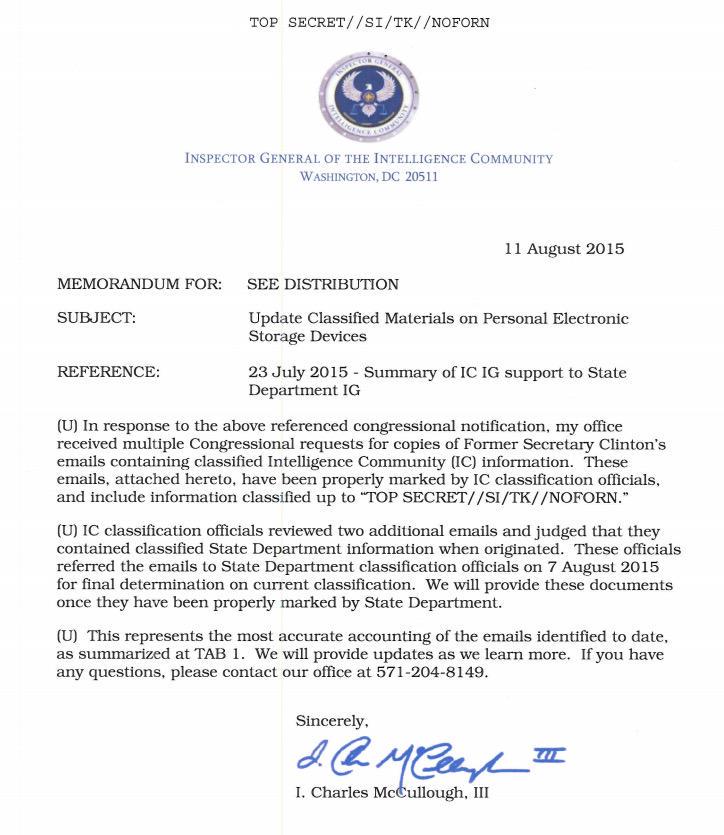 Senator Chuck Grassley took the aggressive and positive step on August 11 to provide voters with the new information noted here.

Also Tuesday, Kendall gave to the Justice Department three thumb drives containing copies of work-related emails sent to and from her personal email addresses via her private server.

Kendall gave the thumb drives, containing copies of roughly 30,000 emails, to the FBI after the agency determined he could not remain in possession of the classified information contained in some of the emails, according to a U.S. official briefed on the matter who was not authorized to speak publicly.

The State Department previously had said it was comfortable with Kendall keeping the emails at his Washington law office.

Word that Clinton had relented on giving up possession of the server came as Republican Sen. Chuck Grassley of Iowa said two emails that traversed Clinton’s personal system were deemed “Top Secret, Sensitive Compartmented Information” — a rating that is among the government’s highest classifications. Grassley said the inspector general of the nation’s intelligence community had reported the new details about the higher classification to Congress on Tuesday.

Those two emails were among four that had previously been determined by the inspector general of the intelligence community to have been classified at the time they were sent. The State Department disputes that the emails were classified at that time.